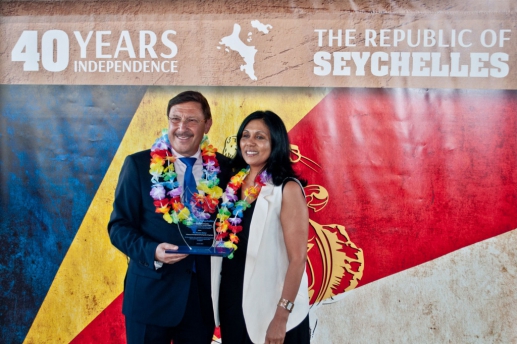 Maxim Behar, Honorary Consul General of the Republic of Seychelles to Bulgaria, received diplomatic award for his contribution to Africa. H.E. Mrs. Vanessa Calvert, Ambassador of South Africa to Bulgaria surprised Maxim Behar with an award for his contribution to the popularization of the African culture and for his work developing the economy and tourism of Seychelles at a special ceremony on the occasion of the 40th Independence Day of the island.

„On behalf of the Group of African ambassadors, Heads of missions and Honorary consuls to Bulgaria, it is my great pleasure to hand this award to Mr. Behar, who works for the representation of our culture and for the improvement of the image of the African countries in Bulgaria and all around the world", said H.E. Mrs. Vanessa Calvert.

"I am thankful to the Group of African Ambassadors for this recognition. The Republic of Seychelles is exceptional. They are Bulgaria’s friend and the most beautiful place that you can visit as well. I am happy that our joint efforts for popularization and development of Africa, and in particular the Republic of Seychelles, have been appreciated. Hopefully together we can keep working for this cause”, said Maxim Behar, Honorary Consul General of Seychelles to Bulgaria.