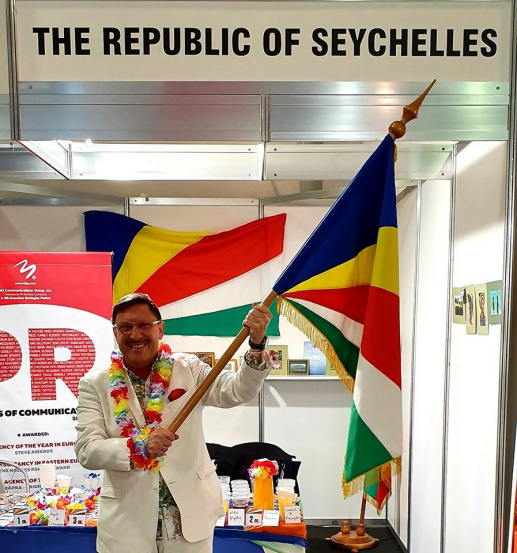 The Honorary Consul General of the Republic of Seychelles for Bulgaria, Maxim Behar, and #M3DreamTeam supported another good cause!

On December 1, the 25th Anniversary Charity Bazaar of the International Women's Club - Sofia took place at the Inter Expo Center. This year, 62 countries from around the world participated, fascinating visitors with traditional dishes and clothing, handmade items and national customs.

Behar and M3 Communications Group, Inc. took care of Media partnerships and the promotion of the event for a consecutive year. The Seychelles presentation was traditionally one of the strongest, and #M3DreamTeam created the most colorful and diverse stall. The guests at the bazaar could buy authentic jewelry, colorful souvenirs, tropical drinks, and high spirits were guaranteed. The exotic country attracted countless visitors who donated in the name of the good cause. Maxim Behar was on the stand all day long, telling interesting stories from his travels to the islands.

The halls of the Inter Expo Center were filled with the colors of different cultures, and the event was accompanied by the performances of famous Bulgarian musicians. Visitors had fun exploring new countries and donating money for the good cause. This year, the proceeds raised will be used for 30 charitable causes in honor of the club's 30th anniversary. Special guests were HB Tsar Simeon II and his wife Margarita, as well as the new American Ambassador to Bulgaria, H. E. Herro Mustafa.