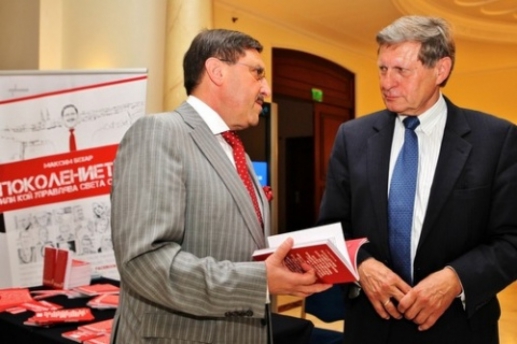 Leszek Balcerowicz, who fathered Poland's transition away from central planning, managed to bring down to earth Bulgarian politicians, embroiled in turmoil for months, a leading PR expert has commented.

“In a movie I made about him back in 1992, Leszek Balcerowicz claimed that political stability is crucial for carrying our economic reforms. This dependency is clearly still valid,” Maxim Behar said after the renowned Polish economist delivered a lecture in front of business representatives in Sofia.

Leszek Balcerowicz paid a three-day visit to Bulgaria at the invitation of the Bank of the Year Association.

“A crisis can be compared to a fire. If your house is on fire, you would not recommend putting out the flames slowly, right?”, Leszek Balcerowicz said in his lecture in Sofia.

He urged local authorities to act quickly and with determination.

Twenty two years ago the national TV channel BTN broadcast Maxim Behar's documentary “Balcerowicz takes off his glasses," which told for the first time the story of the historic transition from a centralized to a market economy made by the then Polish Deputy Prime Minister and Finance Minister Leszek Balcerowicz.

Later, he served two terms as governor of the Bank of Poland, contributing in a big way to the expansion of the Polish economy in recent years.