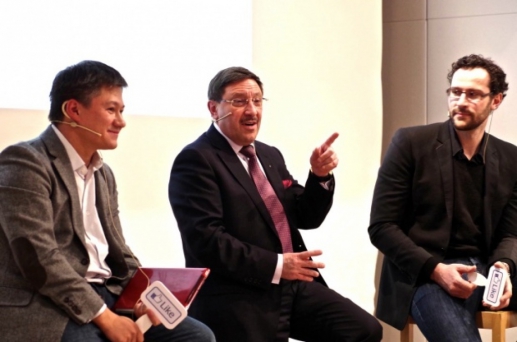 The web has been flooded with new social media already overshadowing Facebook, emblematic Bulgarian PR expert Maxim Behar stated at the opening of the World PR Forum in Davos, "Communication on Top".

"It is obvious that the world is changing with the speed of light and the web is now being flooded with new social media overshadowing Facebook's monopoly," Behar said at the start of forum.

Behar has been among the speakers at the World PR Forum in Davos for a fourth year in a row, since the launch of its first edition, and has been a member of the prestigious forum's organizational committee for three years.

In the 2013 edition of Communication on Top, the Bulgarian PR guru moderated a panel discussion entitled "Social PR vs Traditional PR", with Andrey Barannikov, CEO of SPN Ogilvy, Russia, and Jakub Hrabovsky, CEO of Manage Social, UK, as panelists.

"Social media now enjoy a tremendous influence not only in communications but in societies in general. Traditional media are gone; not only the press but also radio and TV stations now have different roles that are invariably less significant that the roles they played just 5 years ago," Behar told the participants in the global PR event.

"I think the last printed daily newspaper will be read in 2020. I also believe that 2013 will be the last year in which Facebook will be almighty as a universal media, and that it will be precisely this year that we will witness the development of many new social media, mostly based on photo and video exchange. I think 2013 will be the year of Pinterest," he elaborated.

In the 2012 edition of Communication on Top, Behar presented and backed his views about the dominant role of social media; in his keynote address in 2011, he analyzed the success of Facebook, while three years ago he was the moderator of the introductory debate at the forum between global PR experts Paul Holmes and Marshall Sponder.

The forum Communication on Top summons professionals and innovators in the field of communications, and lets the trend-makers share creative ideas, and discuss best practices and new strategies. This year more than 150 people from 35 different countries around the globe participated in the forum.

In addition to partaking in the social media debate at the 2013 forum, Maxim Behar was among the moderators of the C4F (Communication for Future) Award Ceremony. The C4F awards were presented for the third year in a row to individuals who influenced the development of communications, and contributed to the introduction of new trends in the field.

Behar was selected to present the first ever C4F Grand Prix, the big prize at the event, which was received by globally renowned viral communications specialist, Dr. Leonardo Herrero.