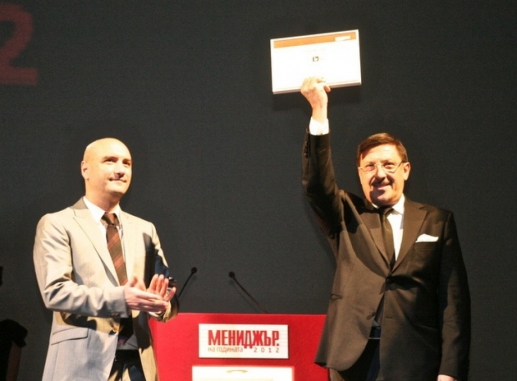 Maxim Behar has been voted Bulgaria's "Manager of the Year" for 2012 in the online vote of the largest Bulgarian private TV channel bTV as part of the annual top managers' contest of the renowned magazine "Manager".

Maxim Behar, a Bulgarian PR expert with dozens of international awards, had been named by the renowned magazine "Manager" as one of Bulgaria's Top 10 Managers for 2012. He was awarded for his Top 10 Managers nomination at a marvelous ceremony together with the other nine top managers of Bulgaria which took place in the Sofia Opera Hall Friday night.

Behar, who is the owner and CEO of one of Bulgaria's leading PR agencies, M3 Communications Group, Inc., triumphed in the online poll of the bTV channel beating the other nine contestants, thus ending up with two awards.

"There are crucial things for Bulgaria in 2012. One refers to the state, the other – to us, the managers," Behar stated upon receiving the award for his nomination as one of Bulgaria's Top 10 Managers.

"The [Bulgarian] state must realize that it is on the same time with the business. However, the business is the starting forward, and the state is the goalkeeper and defense – it protects the business and passes the ball to it so that the business can score goals. The second thing is what managers should know – never give up, never stop, score goals, and don't look back," he added.

Two months before that Maxim Behar was awarded as a Distinguished Honoree in the Executive of the Year in Advertising, Marketing, and PR category by the International Business Awards, aka The Stevies. Before that, his company M3 Communications Group, Inc., received the Stevie Awards in the categories "Public Relations Agency of the Year in Europe" and "Most Innovative Company of the Year in Europe."

Behar is also a member of the board of the prestigious communications forum, Communication on Top, based in Davos, Switzerland, and the Treasurer and member of the Executive Committee of the world's most influential PR organization – ICCO (International Communications Consultancy Organization). Since 2004, he has been the Honorary Consul of the Republic of Seychelles in Bulgaria. Since January 2012, Behar is the chairman of the Prague Office of the largest PR corporate in the world, Hill+Knowlton Strategies, in the Czech Republic