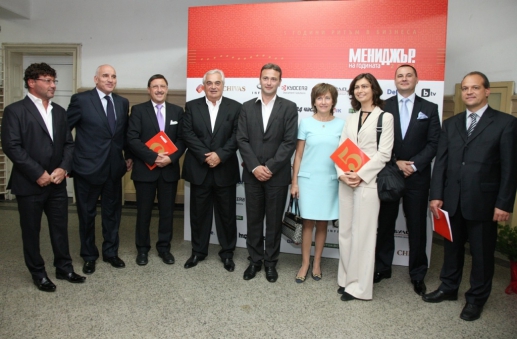 Maxim Behar, a Bulgarian PR expert with dozens of international awards, has been named by the renowned magazine "Manager" as one of Bulgaria's Top 10 Managers for 2012.

This is the first time a representative of the public communications business makes the prestigious ranking.

The winner of the competition for Bulgaria's Top Manager of 2012 will be announced at the end of October, announced the published of the Manager magazine Vasil Mirchev.

"My nomination as part of the prestigious Top 10 of Bulgaria's managers is in fact a huge recognition for the Bulgarian PR business. And since this is the first time the Top 10 features a representative of our business – PR, marketing, social media – that means this success isn't just mine. It belongs to all of my coworkers in the firms in our group, and to our clients and partners, to our colleagues and friends, with whom we compete in the market," Behar stated.

The competition of the Bulgarian edition of the Manager magazine has been held for five consecutive years. The top 30 firms from its ranking, which were announced at a special news conference, have a total of 21 127 employees. Their assets were estimated at BGN 28 B in 2011, while their combined capital is estimated at BGN 5 B.

Just a month ago, Maxim Behar was awarded as a Distinguished Honoree in the Executive of the Year in Advertising, Marketing, and PR category by the International Business Awards, aka The Stevies. Before that, his company M3 Communications Group, Inc., received the Stevie Awards in the categories "Public Relations Agency of the Year in Europe" and "Most Innovative Company of the Year in Europe."

Behar is also a member of the board of the prestigious communications forum, Communication on Top, based in Davos, Switzerland, and the Treasurer and member of the Executive Committee of the world's most influential PR organization – ICCO (International Communications Consultancy Organization). Since 2004, he has been the Honorary Consul of the Republic of Seychelles in Bulgaria. Since January 2012, Behar is the chairman of the Prague Office of the largest PR corporate in the world, Hill+Knowlton Strategies, in the Czech Republic.

Maxim Behar is also the CEO of Novinite AD, the company that publishes the entire group of influential online media – the largest Bulgarian English-language media Novinite.com (Sofia News Agency), the English-language online newspapers – The Sofia Morning News and The Sofia Weekly, as well as the news portal in Bulgarian Novinite.bg and the online Novinite Daily.

"We aren't surprised because we know well Maxim's management skills. We are all really excited about the news about his nomination as one of Bulgaria's Top 10 Manages, and we wish him lots of new successes," commented Ivan Dikov, Editor-in-Chief of Novinite.com (Sofia News Agency) and Novinite.bg.