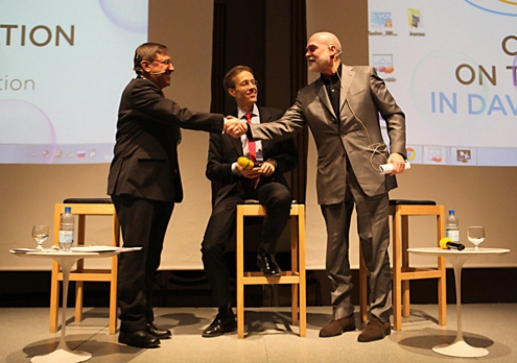 "The world is transparent, there can't be any limits to transparency, as it leads to high ethical standards", Maxim Behar, leading PR expert and CEO of M3 Communications Group, Inc., has declared at the World Communication Forum opening in Davos.

A month after appointed also a Chairman of Hill+Knowlton Strategies office in Prague, Mr. Behar participated in the "Privacy vs. Publicity in the era of transparency" debate along with Allan Mayer, Principal Partner at the biggest show business PR agency in New York, 42West. Moderator of the debate was Daniel Hltgen, Director of Communications at the Council of Europe.

"No one can stop transparency anymore. From now on transparency will constantly evolve thanks to social media, which makes the world better, more honest, and moral, and provide something very important and needed these days - knowledge," said Behar.

This is Maxim Behar's third participation in a row in the prestigious forum in Davos. Two years ago he presented on the topic of social media, and last year he was the moderator of the opening debate between Paul Holmes and Marshall Sponder, as this year Mr. Behar took part in the debate himself.

In addition to participating in the "Privacy vs. Publicity" debate, Maxim Behar is to moderate the C4F (Communication for Future) Awards closing ceremony. This is the second edition of the awards, given to individuals with major influence on the improvement of communications and contribution to the new trends in the industry.