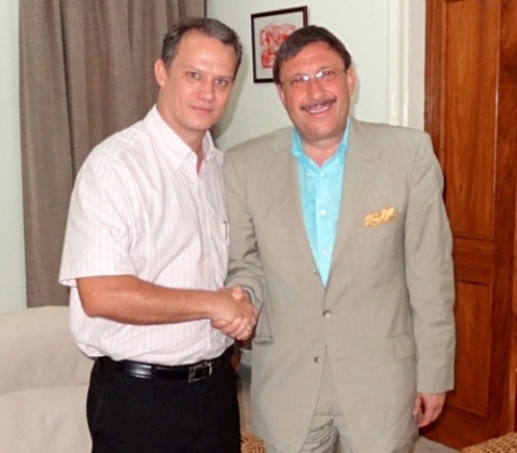 The Foreign Minister of the Republic of Seychelles Jan-Paul Adam has received in Victoria the Honorary Consul of the island republic to Bulgaria Maxim Behar.

Adam has expressed the satisfaction of the Seychelles government from its work with Mr. Behar, pointing out a number of successful projects realized with the help of theHonorary Consul of the Seychelles in Bulgaria.

One of these projects – the Seychelles Investment Forum, a brainchild of Mr. Behar – has already born fruit, and will continue to be organized in various parts of the world.

Foreign Minister Adam explicitly thanked the Honorary Consul for this support, financing and masterminding the education of Marcus Bonte, the first Seychelles student in Bulgaria in the past 25 years.

Mr. Bonte has recently graduated from the International Management and Marketing College in Sofia, and is already applying his knowledge back home in the Seychelles.

His higher education diploma was handed to him by Maxim Behar at a formal ceremony in the Seychelles University in the presence of government officials, ambassadors, honorary consults from around the world as well as the Dean of the University.

Behar has participated in the annual meeting of the consuls of the Seychellesorganized by the republic's government.