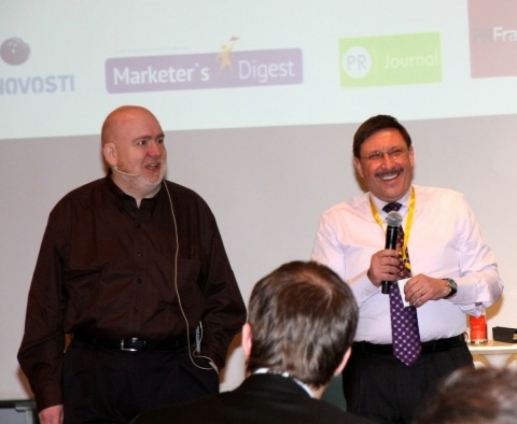 Honesty and ethnics will be the most important elements of both the new media and the new PR, Bulgarian PR expert Maxim Behar at the opening of the World PR Forum in Davis, Switzerland.

The World Forum for Communication Top-Managers took place on February 17-18, 2011, in Davos, Switzerland.

"The most important change in the PR business in the past year is that our clients already have media outlets of their own, and these are the social networks, microblogs, and all the other means of communication that did not exist just a few years ago. And yet, in spite of that, the consumers will not believe dishonest and unethical media, and full transparency will be an ever more defining factor for the success of the PR business in the modern world," stated the Bulgarian PR guru.

Behar, who is the head of Bulgarian Association of PR Agencies (BAPRA), moderated the opening debate at the 2011 World PR Forum in Davos between Paul Holmes, Founder and CEO of The Holmes Report and the SABRE awards, and Marshall Sponder, expert on social media.

Holmes and Sponder tackled the topic of "New PR @ New Marketing" before several hundred participants in 2011 the World Forum for Communication Top-Managers. The debate moderated by Behar caused heated discussions and dominated the following hundreds of presentations and events of the forum.

Paul Holmes, one of the world's top PR experts, stressed the fact that social media have proven their efficiency, and "have even started to bring down governments." He predicted that in a few years the PR business will swallow entirely the marketing field since the social media are already successfully adopting the role of doing analysis and research on consumers and their preferences.

Marshall Sponder put forth the opposing view that only in a few years marketing analysts will be taking over the large PR companies precisely because the research and analysis of the markets and consumers will start to dominate the PR business.

"The forum turned into an event for the world PR business and my participation for the second year in a row in the main part of the program is a big recognition for the business in Bulgaria. Attracting new investment projects is of crucial importance now. It will be hard for a large company to go for investing in a country that is not represented at big international forums," Maxim Behar commented.

In addition to moderating the opening debate, he also opened the Forum's gala dinner during which the first ever "Communications for Future" awards were presented.

The first edition of the world PR forum took place in February 2010, in the Swiss mountain resort Davos immediately after the end of the World Economic Forum. The event has already won the place of the best platform for discussing the future of public communications and their meaning for business and politics. Some 300 communication professionals from around the world took in the second edition of the forum.

During their two days in Davos, the professionals focuses on social media and their role in business and politics from the point of view of PR and marketing, with top managers from large international companies giving lectures, and leading PR and marketing experts debating the issues.

Maxim Behar has been in charge for more than a decade of Bulgaria's leading PR agency M3 Communications Group, Inc, an associate of global PR corporation Hill&Knowlton. He is the Chair of the Bulgarian Association of PR Agencies (BAPRA), and in November 2010 he was elected treasurer of the board of the International Communications Consultancy Organization (ICCO), the most prestigious global organization of PR associations. He is the only Bulgarian member of the committee of the world PR forum in Davos, Switzerland.

For more information about the forum, visit http://www.forumdavos.com/