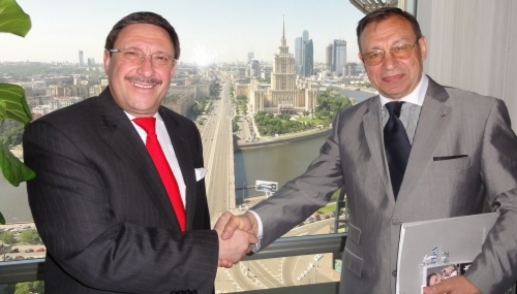 Experts in Moscow have declared Bulgarian businessman Maxim Behar a leading international PR specialist during his first trip to Russia.

“World-famous communications guru Maxim Behar is coming to Russia for the first time. He is the leading PR expert in Bulgaria with a worldwide reputation,” reports Russian website e-xecutive.ru.

The Bulgarian PR specialist and businessman had a tremendous success during his first visit to Moscow. He participated as a keynote speaker in the Russia’s most prestigious PR conference, "PR in Internet", on May 19, 2010, in Moscow, organized by the communications agency eMarka, where he present a report on “New Media, New Communications, New PR”.

He also taught a business master class on modern communications at MIRBIS, the Moscow International Higher Business School, the first and the largest private business university in Russia.

During his trip to Moscow, Behar met with the Chairman of the Russian PR Association Alexey Glazyrin, First Deputy Chairman of the Mass media and Telecom Committee of Government of Moscow Vyacheslav Drozdetskij, the Chairman pf the Moscow International Business Association Alexander Borissov, Vice President of MIRBIS Elena Zoubkova and many other Russian dignitaries and widely known PR and marketing experts.

The Bulgarian businessman spent hours talking to the two most prominent communications representativess in Russia - the marketing guru Igor Mann and the most well-known Russian expert on political PR, Alexey Sitnikov.

"It was one of the most amazing visits in my life", stated Maxim Behar, the CEO of M3 Communications Group, Inc. and Chair of the Bulgaria PR Association. "I will be back soon again, there are a lot of opportunities on the market,” he added.

Previously, Maxim Behar has lectured at many other international universities, including the Kellogg School of Management in Chicago, IL, and has also recently moderated a plenary session during the the Annual meeting of WAIPA, the World's Association of Investment Promotion Agencies in Milan, Italy. Earlier in 2010, he was a key note speaker at the World Forum for Communication Top-Managers, “Communications on Top”, in Davos, Switzerland.