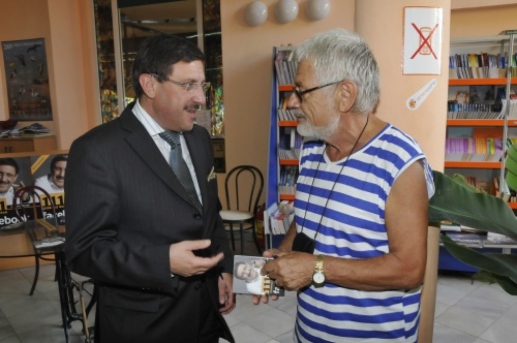 The first book ever written on Facebook, "111 Rules on Facebook", was presented by its author Maxim Behar in the Black Sea city of Burgas on Thursday night.

Bulgarian writer and poet, Nedyalko Yordanov, was the special guest at the presentation.

"This is a unique book, which was first written online, and later published on paper." Behar stated. He added that "this is what will happen with the books of the future."

The book was first presented on June 11 in the Mall of Sofia. Despite the large first print run of the book, it is selling so quickly that Behar and publisher Ciela are planning to produce a second edition that will be slightly more luxurious and with a new design.

"I started to write the rules by coincidence and as a joke. I strongly believe that, in easy and in hard times, we all have a need to read something fresh, interesting and clear, without the need for a lot of explanation and interpretation. I stopped at 111, because at sometime you have to stop," concluded Behar.

Behar, who is a top Bulgarian PR expert, businessman, and a former journalist, is on a "Triple Tour ‘09" to present "111 Rules on Facebook" outside of the capital Sofia, where the book has already been presented twice because of the large public interest.

On Friday, July 24, at 6 pm "111 Rules on Facebook" will be presented by its author at the Helikon bookstore in Behar's native city of Shumen.