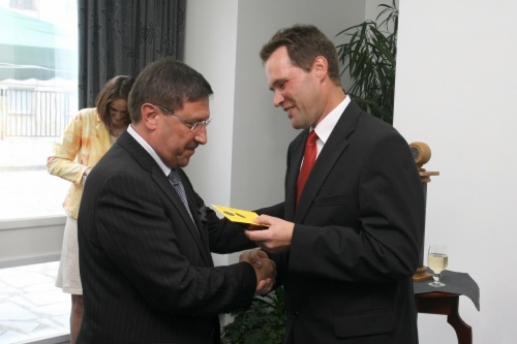 The Czech Ambassador to Bulgaria H. E. Martin Klepetko presented at a special ceremony in the Embassy a special award to one of the leading PR companies M3 Communications Group, Inc., an exclusive Hill&KNowlton associate in the country.

Company's CEO Maxim Behar received the award for his devoted contribution during the Czech presidency of European Union. The award is a limited edition coin with numismatic value and is given only to very closed friends to the Czech Republic abroad. The ceremony was dedicated to the handover of the Czech EU Presidency to Swedish Ambassador.

M3 Communications Group, Inc. has been advising the Czech Embassy for the past six months, but also throughout the years for various political and business projects. The company will continue to work with the Swedish Embassy during the next 6 months and advise it for the projects.

"It is an honor for me to receive such a award. And I take it will all of my heart. I am glad that during the last six months we helped the Czech presidency to be more visible in Bulgaria and I ensure you that we will put professionalism and efforts to make the same for the Swedish six months as well", Behar said.

The same award has been received also by the minister of European Affairs Gergana Passy and a couple of high leveled governmental officials.