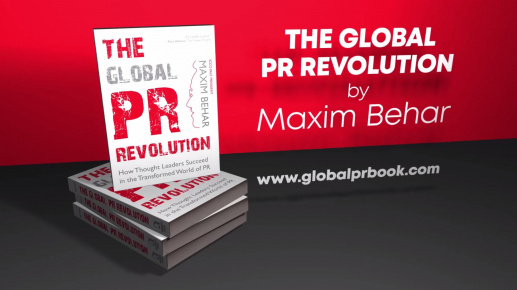 THE POWER OF STORYTELLING

One of social media’s greatest changes to modern-day PR is the rising importance of storytelling.
This book has already pointed out that the job of today’s PR professional is now invariably connected with the creation of news and interesting stories.

Yet we cannot tell or “announce” a news story the way a journalist would. It would be boring, formal, or unnecessary to “report” a story about a client of ours as a reporter would.
We can’t just say, “This pen is great, and consumers should buy it!” We ought to wrap up this message and create not only a convincing, but an interesting story around it.

Here I am, improvising on the spot:
A lady dropped her pen in the street, it was raining heavily, and a gentleman picked it up and said, “May I have your number?”

She was flattered, gave her number, he wrote it on his hand, and despite the torrential rain, the ink lasted because it lasts forever, etc., etc. This story could be about a phone number or anything else that would make sense, keeping the target audience in mind.

We should be able to tell some kind of a news story in such a way that the reader wouldn’t think, “Ha, it’s so obvious that this is a paid ad!” That would be too direct, and it would be repulsive.
Whereas when the story has added value for the readers, it will be perceived in a totally different way. Achieving that feeling is a huge part of our business nowadays.

Stories today are getting more and more visual. They will probably become short videos soon. A lot of people are doing that already, the so-called vloggers, but these are mostly amateur attempts. They are yet to become top-notch video stories.

Indeed, one day not too far ahead into the future, all things will be wrapped inside visuals and audio, not so much in written word, to such a degree that everything will be real time.

My long-term forecast has been that two industries are going to experience a giant boost as a result of these developments—the fashion industry and the optical lenses industry.

Why the fashion industry? Because people are going to care a whole lot more about how they look, how they are dressed, and their overall appearance. There will be no voice calls anymore, since phones will offer video instead. I’m sure that if you do a video call early in the morning, you will get up earlier to shower and get dressed.
Technology is developing so rapidly ahead that in just a few years, there probably won’t be even a video button on your phone—you will have a video call by default. Someone calls, you pick up, and they can see you immediately.
The second industry that will experience a giant boom because of these developments, in my view, will be optical lenses. Because sooner or later all devices that we use today—laptops, smartphones, tablets—will be incorporated into smart glasses (lenses).

At that point, every single person will be wearing glasses, because that’s where their computer display will be.
Google already attempted it with Google Glass. I tested it for a while; it wasn’t the best. But that is going to happen someday soon.This is why the power of storytelling—today in text, and already in visuals—will be the defining feature of PR following the social media revolution.

Storytelling was never an essential part of PR before social media, because it was the bailiwick of journalists.
We used to feed material to the journalists, but classic PR never dealt with all that: writing an article, sending it to a journalist, and telling them, “Publish this!” because that was beyond any ethical and professional norms.
Now that we have media, it is very different—going back once again to the definition that today’s PR expert is the perfect mix of a publisher, editor, and reporter.

We already have the opportunity to write and publish stories about the products and services of our clients. That’s one more revolutionary development in the PR industry today.

It wasn’t typical for a PR expert to draft stories. They were supposed to convey news and put forth the advantages or qualities of the products they represented.

That’s why it is fair to say that storytelling is new, uncharted territory for the PR industry.

You can check all the options on how to buy the book at www.globalprbook.com