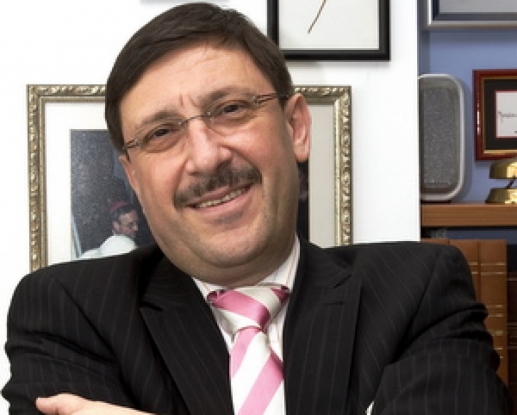 Maxim Behar, publisher of Sofia News Agency, has been pronounced Honorary Citizen of his hometown Shumen in the northeast of Bulgaria, as he turned 50, December 10.

"Yes, you have indeed grown up as a person, and as a leader," Shumen Mayor Vesselin Zlatev said in answer to the question printed on Behar's birthday invitation.

Zlatev and Municipality Council Chairperson Daniela Russeva travelled to Sofia to deliver the highest recognition personally at the party on Saturday, carrying a bunch of Shumen crane's bill to bring Behar health and remind him of his roots.

After inviting his mother on stage to share the precious moment, Behar announced that he would triple the check that went with the award and donate EUR 2,300 to the school his father and he went to. The money would go for a new computer laboratory, he said. Inspired by the idea Teodor Milev, Country Manager of Microsoft Bulgaria, spontaneously chipped in another EUR 700, thus gathering a total of EUR 3,000 for the school's IT equipment.

About a thousand friends, partners, and colleagues gathered at the Radisson SAS hotel in Sofia to celebrate Behar's birthday. The crowd had a taste of politicians, singers, artists, and business partners. President Parvanov and PM Stanishev sent warm congratulation addresses to Behar earlier.

Apart from the gift, Behar received a lovely surprise by his crew with Stanislava Petkova's fabulous rendition of Aretha Franklin's A Natural Woman (You Make Me Feel.)

"When a man turns 50 he starts a countdown," Behar said, quoting his friend, Hill&Knowlton's Executive VP Terence Billing. "So I want to invite all of you to my 49th birthday, a year from today."

Maxim Behar is CEO of Bulgarian leading PR company M3 Communications Group, Inc. and chairman of the Bulgarian Business Leaders Forum. The first Bulgarian member of the International Public Relations Association (IPRA) and winner of the 2004 big prize of Ikonomika magazine for contribution to the development of business communications. Long time journalist, founder and co-publisher of Standart newspaper, author of the book Secondary Instinct. Honorary Consul of the Republic of Seychelles in Bulgaria.