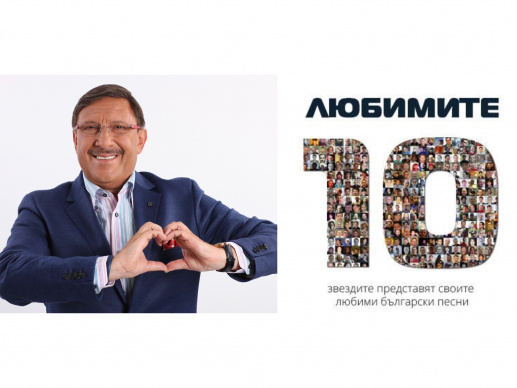 Maxim Behar presents his 10 favorite Bulgarian songs and personal stories related to them in the "Favorite 10" podcast section of BG radio.

10. FSB - High
- FSB is a group of great musicians. It is one of the symbols of my generation - the 70s, when we all listened to rich music formed by the messages of the group The Beatles.
FSB is the first group in Bulgaria to be born rich with sounds and instruments.
The song and the title "High" show where we should go, and since then this is my standard - high.

9. Georgi Minchev and the Crickets - White Silence
- Of all their songs, I like "White Silence" the most, although they have far more complex and interesting songs related to many of their messages.
I remember how the picture of Georgi Milchev and the Crickets in front of Alexander Nevsky Cathedral suddenly appeared on our black-and-white Opera TV. This whole poetry of the song was not typical for Bulgarian pop, even in those years. I like it and it doesn't just take me back to the 70's, but rather tells me that there is white silence in today's life, and we have to create it.

8. Tangra - Wealth
- This is a very nice student song that is easy to remember - especially the part about the landlady who “comes in the morning to ask about the rent and brings coffee and muffins”, who does not exist in real life – then and now. We all danced a lot on this song.
In the 70's I joined a band "Tears" and we played together - I was on drums, Krasi Nikolov, who currently has a recording studio, was on bass guitar, and Chavdar from the band Impulse was on solo guitar.
I recently talked with Dancho Karadzhov from Signal and he told me how they came to this Buxton club every Friday night to listen to "Tears" and make fun of us. However, we went to watch the early Bandarats before they became Signal, in Ovcha Kupel every Saturday night.
I also grew up with Kosyo Markov, the founder of Tangra, with whom I lived almost on the same street and I called him "Kosyo the antenna" because he was the only one who had a TV antenna and caught Serbian television. We often gathered at his place to watch movies and especially to listen to rock bands.

7. Donnie and Momchil - Tired Wings
- This is a modern song, which is surprisingly lyrical for the 90's, when it was created – at times when life was not calm and well-organized. That's why the song made an impression, and they are both very good musicians.
Momchil had a long break period, and in recent years he wanted to return to his music career. And what Donnie is doing, together with Netty, in the last years of his career is very good for the Bulgarian stage. They are very good performers who travel around the world, including America, where they are also loved by fans. But it all started with Tired Wings.

6. Agate - The Black Sheep
"There are several reasons I like her." Agate is a very good band with wonderful musicians, especially Zvezdi. A few years ago, I participated in a show "The icing on the cake" and
Zvezdi had to appear and sing a song based on my lyrics, which I had written quickly, absolutely amateurishly during the show. We did a great show together then.
For those years when the song was written, being a black sheep was not as positive as it is today. Now that means being different, more interesting, more revolutionary, having better ideas.

5. D2 - One hundred years
- The band has a lot of good songs and I will never forget one night when I was at the Swing Club, which still exists today, and I heard a band performing covers. I went to one of the boys and told him, “You know, I want to hire you to play for one of our projects for a client. What is your name? Who are you?” And he replied that he would come and bring me a CD of their songs to hear what they can offer. This boy, Mitko Karnev, rang my doorbell one Sunday night and handed me a CD - no cover, nothing, just written with a felt-tip pen – D2. The name D2 comes from Dichi and Dimitar, and that was the moment they decided it was going to be the name of their group.
This was long before the songs "100 Years" and "Ice Girl", which are one of the emblematic songs for the band. I still regret that Dicho is no longer part of the group because they both had a lot of chemistry. At the same time, Mitko Karnev has grown a lot over the years. He is a wonderful musician, the engine of the band at the moment and whenever I find out about their concert or show in a club, I am their spectator and fan.

4. Sprint - Domino
- The song has great energy, good lyrics, and such a good rhythm that I calmly put it as one of my first favorite Bulgarian songs.
When one day, a few years ago, I came across a conference and Peyo from the Sprint group came to me, not knowing if I remembered him, and I glowed and told him, "You're the one with Domino," then he wondered that I know his song.
Domino is a very good song, which speaks not only about the years in which it was written and performed, but also about the fact that in Bulgaria there was estrade, which was not only presented at Intervision or the Golden Orpheus, with respect to the festivals of that time, but as estrade with a western character. The singer has a very good voice and performance, and I would be very happy to meet her and Peyo.

3. Avenue - Escape
- The performers from Avenue are some very good friends of mine. The song is very pleasant and lyrical, as well as very interesting. When I first heard it in the mid-90s, I said that it was not possible for such a song to be written in Bulgaria. So musical, enduring and enjoyable, and at the same time with such strong messages in it.
I love this song very much and I am very close with both Zaki and Bobby, but Zaki and I had a lot in common. I am glad to have such friends - musicians. They are much more than musicians. They are people who are into business and have a broad general culture.

2. Poli Genova - If love was a crime
- A great singer and a very good friend, with whom I communicate quite often.
Her song reached 4th place at Eurovision and was the only one in the entire chart with English lyrics and an English title, which is typical for the rules of Eurovision. I have a lot of respect for the performers who prefer to sing in Bulgarian, but English is already a world language. They often criticize my Facebook posts, which I write in English, and I explain that Facebook is not Bulgaria, but the World. Polly Genova is in the same situation.
"If love was a crime" is a very well-made song, well composed, with good lyrics, choreography and performance. I think she is one of the best Bulgarian singers at the moment and has a very bright future and career ahead. I'm glad we have this song and I'm sorry, of course, that she didn't win Eurovision.

1. Charisma - You pass through me
- The song is very modern, well structured, with good lyrics and wonderful performance, and in general the whole song is interesting. There are no elementary choruses, no simple messages, at the same time it is very musical and difficult to perform - vocally.
I have known Miro and Galya for many years, since the 90s, when there was a restaurant in Sofia called Opera House, where students from VITIZ and NATFA were hired, among whom were Militsa Gladnishka, Orlin Pavlov, as well as Miro and Galya. The students were waiters and served with microphones, making a great show.
The Swedes, the owners of the restaurant, were our customers and we took care of all communication, PR, opening events and everything related to the restaurant. The opening was one of the most important events in Sofia for the whole decade. All these people I listed above made such a show that it was obvious each of them would succeed more and more in the near future. And so, Miro and Galya wrote this song "You pass through me", which seems to me to have remained the best song in Bulgaria for the last 20 years.