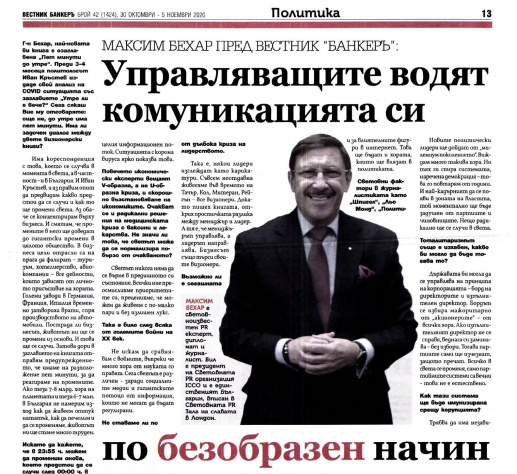 Maxim Behar: "We have five minutes to adapt"

Maxim Behar, the world-renowned PR expert and diplomat, spoke to Banker newspaper about the leadership crisis during COVID and how to deal with it to save humanity.

- Mr. Behar, your latest book is entitled The Morning After. Three-four months ago, the political scientist Ivan Krastev published his analysis of the COVID situation with the title "Is it tomorrow?" It seems you are answering him now: not yet, there are five minutes until tomorrow morning. Is there a correspondence dialogue between the two visionary books?
There is correspondence with what is happening at the moment in the world, and in particular - in Bulgaria. Both Ivan Krastev and I are trying to predict what will happen and how it will change the world. However, I’m focused on business. And I think that the changes in it will lead to gigantic shifts in the whole society. In business, entire industries are on the verge of bankruptcy - tourism, hospitality, airlines - all activities that depend on the personal presence of people. Large factories in Germany, France, Italy temporarily closed their doors, stopped the production of cars. If business suffers, our lives will change fundamentally. And it will happen. Therefore, even in the title of the book, I warn that we have five minutes to react to the changes. If these 7-8 billion people on the planet and these 6-7 million in Bulgaria do not find a way out - how to live from now on, how to earn and change, our lives will become very difficult.

- Are you saying that at 23:55 we can change what is to happen after 00:00 in historical time? Isn't the deadline too short?
The changes are developing very fast, the dynamics are exceptional. In addition, the changes in the world of the last 10 years are happening under the influence of social media and the new way of communication. We all know everything and everyone can write whatever they want.

- The technological explosion is the greatest revolution in human history.
The basis is technology, and the result is social media. In the gigantic flow of information, it is difficult to analyse what is important and what is not, especially what is true and what is untrue. Fake news creates gigantic chaos throughout the information flow. The coronavirus case clearly shows this.

- Most economic experts predict a V-shaped, not a U-shaped crisis, and a recent economic recovery. Radical solutions to the medical crisis with vaccines and drugs are also expected. Doesn't this mean that the world can go back to normal faster than expected?
The world will never return to its former state. We all reconsidered our priorities, we decided that we could live with less money and without unnecessary luxury.

- This has been the case since each of the great wars of the 20th century.
I don't want to compare it to wars, although many people in science do. Now the world is different - because of social media and the gigantic flow of information that cannot be regulated.

- Do we not also become victims of infodemia that could develop more avalanche-like than the pandemic itself?
We become victims if we do not know how to manage the flow of information. We are all victims of fake news, so their creation and dissemination must be criminalized.

- Will the censorship alarm turn on immediately? And now the Penal Code includes insult and slander laws.
We need to know the sources of information well. In this sense, my book focuses mainly on leadership. Leaders can help all of humanity.

- All of humanity is currently suffering from a deep crisis of leadership.
That's right, some leaders look like caricature. Most recently, we lived in the time of Thatcher, Cole, Mitterrand, Reagan - all visionaries. While writing the book, I discovered the simple difference between a manager and a leader. And it is that the manager manages and the leader directs. Businesses are also looking for their visionaries.

- Is it possible that the current crisis situation will finally sober up the citizens and they will start choosing strategists instead of caricatures as statesmen?
It will definitely happen. Most of the current leaders are transient, they are people of total chaos - in the morning they say one thing, in the evening the opposite. And large masses of people believe them.

- Isn't this the state of "post truth" in which emotions weigh more than arguments?
Yes, especially when shared by the mass media. Only 15-20 years ago, TV hosts, politicians, athletes, showmen were influential. That is - the faces on the TV screen and newspaper headlines. Society is now influenced by people from social media, whose audience is larger than the audiences of all newspapers and television at the same time. And people are confused about who they can trust. Very soon we will wake up and ask ourselves the question: who do we choose to rule us?

- Perhaps the role of journalism as a quality filter of information will return. One of the basic rules of the BBC is that the journalist must work with the facts in the same way as the bank clerk with the money - they pass through his hands, but are not his property.
That's right, that time will return. This also applies to influential figures on the Internet. Such people will enter politics.

- World factors in journalism, such as SPIEGEL, Le Monde, Politico, the Guardian, and The Independent, wrote sharply about high-level corruption in our country, and the government responded that it was a matter of paid publications. A boy from the corridors of the government even explained that ordering was easy and cheap. What does such behavior mean?
They think people will believe anything they say - someone paid 1000 pounds for a publication. It is impossible, these are global institutions with a huge biography. If you could buy a SPIEGEL or a Le Monde, they wouldn't be what they are now.

- Do you see new leaders in today's squares of Bulgaria?
The new political leaders will come from the "millennium generation". I see many such people. But they are stopped by a system called democracy - I have been saying this for years. And the most capable to appear in the zone of power, he will be immediately suffocated by parties and officials. Something radical will happen in the world.

- Totalitarianism is also over, what could it be then?
The state could be governed on the principle of corporations - a board of directors and an executive director. The board is elected by the majority of "shareholders" - by all people. If the CEO fails, he leaves immediately - without elections. Then the parties will disappear on their own because they interfere. Everything in the world is changing, only party systems are eternal - this is not natural.

- How will this system be immune to corruption?
There must be an independent judiciary and the prosecutor's office should be in the country - the Minister of Justice to be the chief prosecutor.

- As an expert, how do you evaluate the "jeep PR" practiced by the Prime Minister?
From my point of view, it is a failure. A prime minister must address his messages in a different way. Money cannot be distributed like that. This is the opposite of the modern government we are talking about. The rulers conduct their communication in an ugly way. There are many young and intelligent people in Bulgaria who would govern the country immediately and with a vision for the future. It will happen very soon.