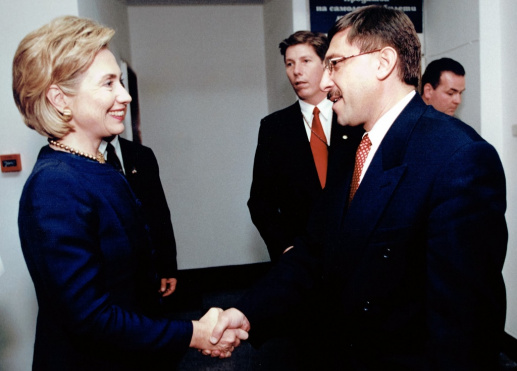 THE MOST IMPORTANT MAN: A story with Hillary Clinton, flowers, hotels, suits and a happy ending

"Priceless Lessons" is a series of columns by the PR expert Maxim Behar, in which he talks about his meetings with global celebrities through the prism of his business, about the lessons derived from such stories , and what he has learned in a purely PR aspect.

The first story he shared with BusinessGlobal magazine was about his meeting with Hillary Clinton.


THE MOST IMPORTANT MAN: A story with Hillary Clinton, flowers, hotels, suits and a happy ending

I was stretching out on the beach carelessly with a magazine in my hand when Neri Terzieva, the press director of President Petar Stoyanov back then, called me and told me "Max, Mrs. Stoyanova wants to see you as soon as possible." I got in the car and flew into the presidency a few hours later. I had no idea what the president might be looking for, but it was actually one of my most valuable PR and management lessons, coming from an unexpected experience, but actually remembered forever in my business.

So Hillary Clinton, the first lady of the United States back then, was coming to Bulgaria, and someone had to take care of the whole organization of the welcoming, staying, sending off, and — of course — the media. This, the last part was the easiest. America was shaken by the scandal with the incident between her husband and trainee Monica Lewinsky, and therefore, Hillary's people were absolutely explicit when they arrived about a month before her - no meetings with the media, no statements, no interviews, even with pre-asked questions.

Hillary was going to open a women's regional conference at the Ivan Vazov National Theater, so we all were focused on this place. The so-called advanced team really arrived a month earlier and included a protocol, security, people from the White House press office, 24 hour coordination by a super-professional – Bane from the Secret Service.

Every project, meeting, gesture or word, even with Bane and the team, was a series of lessons of incredible professionalism. Two weeks before the event we did a detailed tour of the theater and then one of the Secret Service personnel, while looking at the scheme of the event prepared by my team, said: "Max, no pots, no flowers on stage, I'm here to ensure the safety of the First Lady and I can't take any risks. " I nodded and didn't even think to argue.

The last night before the event, we spent the whole evening in the theater in exhausting rehearsals and rehearsals of sound checks, visuals and everything else. Many TV channels, including CNN, had requested live broadcasts, and the last detail had to be perfected. There was a lady on the team with the same blonde hair and height as Hillary, for hours she stood in the small chair from which the First Lady would speak the next morning, and the whole team was making sure to achieve her brilliant appearance. Bane slowly sipped a beer from a pitcher and every fifteen minutes either changed the color of the curtains behind the stage or asked the girl to change her suits. At 4am everything was set - golden curtains, and Hillary will be in stylish black suit obtaining the best contrast.

We were leaving when suddenly Bane turned to me and said, "Max, where are the flowers?" I thought he was joking, because he was a bystander in that conversation I had with the guards earlier. "I'm sorry, but I'm in charge here. I can't have the First Lady on stage without a nice flower decoration, I just can't! ” I was shocked. I had to find flowers for Hillary Clinton's stage at 4am … For an event that begins in 5 hours! For a moment, however, I didn't think it was impossible. I woke up the Sheraton marketing director at the time with a request to pick flowers from the hotel. Impossible, she told me. "Hillary lives there, you can't even enter the hotel, what's left to take out flowers?" I picked up the director of Kempinski hotel. Still sleepy, she said, "Take some, but I want them back by noon, or they'll fire me."

I showed up at Kempinski in the afternoon to make sure we had returned the priceless flowers, and as I drank my tenth coffee of the day, the chain's general manager, a nice Irishman, Liam, greeted me warmly for the successful event opening. "By the way, Max, I watched the CNN opening, and it was great. I found that we use the same flower company, as they were exactly the same as ours in the hotel. I nodded, I was more than calm and I knew what I still remember today - there are no impossible things in the PR business…

The next day, Bane sent me a message: “The First Lady (the only way he was calling her) will meet you tomorrow, you have 30 minutes." And when he introduced me at the entrance, he said, "Madame Clinton, this is our PR partner for your visit. His company is part of Hill + Knowlton, you know them well. "

Hillary looked at me, then at him, and said, "Well, that's the most important person here then."