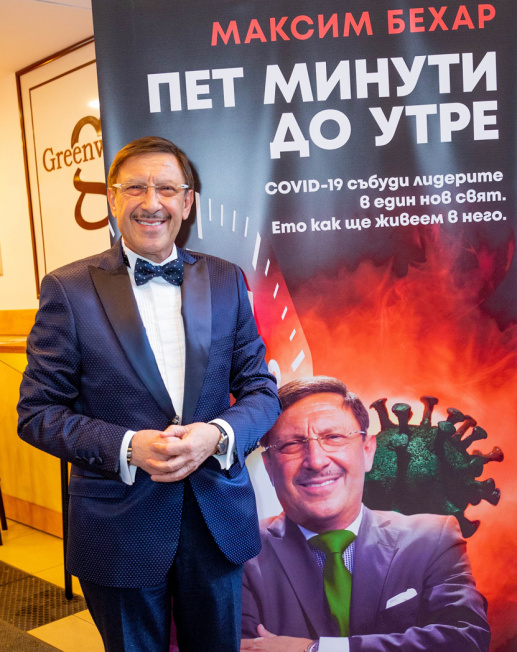 Maxim Behar for Forbes: "There is a huge difference between leaders and managers"

Maxim Behar comments on current issues, which he also addresses in his recently published book The Morning After. The leading PR expert shares his opinion on the changes occurred in leadership in today's challenging times, as well as what is the main difference between a leader and a manager.

- Mr. Behar, what have provoked you to write your new book The Morning After?
It was more than a provocation. The world has never been in such a crisis - economic, communicational, and mostly psychological. I had to solve hundreds of new obstacles for me and my whole team, in conditions that no one was prepared for. We did great, and I had to share how we achieved it, including more global examples, or just share my thoughts about this increasingly insane and unpredictable world. I called Neiko Genchev, the owner of Faber Publishing House, who was introduced to me by Eric Weiner, the author of The Geography of Bliss, and many other bestsellers. So, I wrote the book just in two weeks, and Faber published it for one. Of course, I am more focused on business leadership, supporting the idea that it's the most important factor for a company to succeed or fail. I was even more motivated to finish writing this book when I received a message on Twitter, saying that my previous book, The Global PR Revolution, firstly published in the United States a year ago, was ranked in the top ten PR books for all time globally from the most authoritative global ranking BookAuthority, in which people such as Elon Musk, Mark Zuckerberg, Jeff Bezos, Warren Buffett, Bill Gates, Tim Cook, Jack Ma, Richard Branson rate and offer books. I said to myself, 'So you can!'

- How essential is leadership in today's difficult times?
I have a good friend, a very famous person in the Bulgarian IT business, who spent years in as a sailor on ships in the past. As soon as he started, he worked hard and often was asking the boatswain if he was doing well. "Wait for the first storm to come, then I'll tell you," the boatswain replied. That can also be applied to business. Leadership means doing only two things every day, every hour - making quick decisions and creating more leaders around you. I have always said that even the worst decision is better than no decision, which is the first rule for today’s challenging days. Most leaders are afraid to enter the storm, preferring to keep boats ashore safer, however, the storm can’t be missed, and they will never be able to reach the other shore, where success and progress are. Nowadays, Leadership can be defined as professional visionary work and understanding of the huge difference between a leader and a manager, which in the Bulgarian language actually consists of only one prefix of a super important word… The manager manages - this is his job, to apply the best models, to take care of the team, to implement the decisions of the boards or the seniors. However, the leader must lead, be a visionary, predict what could happen to the company, its customers, partners at least a few months ahead, if not for years. But now times are really turbulent and a vision for the next few months, even Plan A and Plan B "in the pocket" of every leader is a necessity.

- Really, in your book you say that the difference between a manager and a leader is that the manager manages, and the leader guides. How do you guide your employees?
Since the first day of the crisis on March, together with my colleagues from the company’s Board, we have allocated the urgent tasks, but I must admit - I took on a lot more functions in control, as well as almost all customer relations. Nowadays, being a leader in a large communications company is a huge responsibility. My most important task was to make sure that our clients understand how much they really need brilliant communication, in which mistakes are excluded. For a long time, companies have shrunk or cut their marketing budgets - whether for advertising, PR or social media, during crisis. But it must be just the opposite, and those were my messages. Especially in such unexpected and unprecedented crisis in our lives. Most of my colleagues are young - some of whom are very experienced professionals, but that not always applies in such challenging times. Therefore, since the beginning of the pandemic on March, I have had a guiding principle - everyone should feel comfortable, while working home office. If they are not in condition to work at home, or cannot adapt to such method, then you should let them work in the office at a strict distance and hygiene, or in some cozy caf?. Everyone should feel complete and calm. And of course – hard working, perfect organization and leadership. One of the biggest differences between "before" and "now" is that now everyone is a leader in their own place, everyone must make strategic decisions for their work, to implement them, to be precise and with a vision…. In fact, this seems to be my most important lesson from this still unpredictable crisis, which we don’t know how and when it will end.

- Which platforms do you use the most for business communication?
I go through all possible platforms every day, mainly depending on which customers use. In the first days of the crisis, however, I discovered Zoom, perhaps because I had worked with it before, and the more time passed, the more I liked it. As president of the World Communication Forum in Davos, I meet almost every week with people from 20-30 countries at the same time and Zoom is quite easy to manage. I've reached 350 people from 110 countries at a time online, which consumes energy and time, in a sense I had to set up a virtual space, remind them to follow the program, coordinate issues… Zoom itself is a textbook example of dealing with a crisis, which increased its users from 10 million in January 2020 to 200 million in April. Can you imagine how such growth is managed with constant improvement of the service…?

- How can we create a good team online?
In March, I thought it’s impossible. However, life has taught me that there are no impossible things in business. I am already preparing my psychological models on how to deal with possible conflicts among colleagues, who and how to listen or where to intervene. To all those who think that in a few more months a vaccine will be inveted, and everything will be as before, I want to say out loud: nothing will be the same as before. The whole world is changing dramatically, and we must have options to unite our colleagues online, to inspire them with peace and security, to guide them. And this whole process now depends only on team leaders, no one else.

- What to expect in 2021?
Quite a different business environment, great dynamics of processes, a different way of communication… In fact, let me put it this way - in the next years, the one who knows how to communicate quickly and effectively will be the winner. Communication between people and companies, both in business and in personal life, will be the most crucial component that will determine whether someone succeeds or fails. I still hope that the first category will have an absolute majority worldwide.