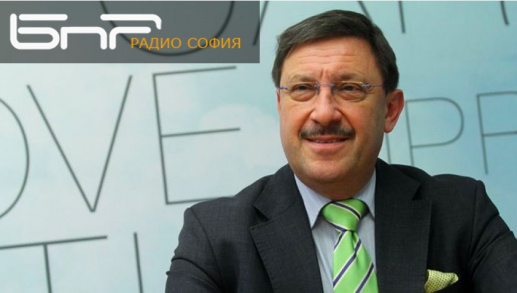 Maxim Behar was on Radio Sofia with Konstantin Lavsov and Alexandra Ilieva in the morning show "Wake up Sofia". The communication expert commented on the clich?s in business, politics and life, how to conduct a successful job interview and be more creative in 2020.

Host: And now we move on to something, in my opinion, quite interesting from today "Clich? Day". We will talk about the most common clich?s in politics and somewhere else interesting, for example the job interviews in a dark room where you can find yourself with two or three more people. There is now a person on our line who sometimes does not need to be represented, but I will mention only - the communication expert Maxim Behar. Good morning, Mr. Behar!

Maxim Behar: Good morning to your listeners on Radio Sofia.

Host: Congratulations for being re-elected President of the World Communication Forum Association.

Maxim Behar: Thank you very much!

Host: You are certainly a person who understands a lot about communications and that's the reason we chose you to discuss todays topic about clich?s, because in 2020 sometimes when you hear a clich? you just roll your eyes and you are literally tired of hearing such phrases as, I immediately remember and even wrote it down: "Not destination, but travelling is important" or "Time heals", "It takes money to make money". Are these things already irritating in 2020?

Maxim Behar: What you are talking about are rather thoughts of different people liked by people, than cliches. They irritate me as much as I can recognize them and ignore them, as my business is mainly about overcoming clich?s and inventing new interesting things. When these new interesting things also become clich?s, then we try to move on and look for new ways or new means of expression to explain to users or our listeners and readers, especially in online media, the same thing in another way. I wouldn't say that the use of clich?s is a big drama because there are words we keep repeating, like "I love you" or "What can I do for you" or other things that some people consider clich?s, but I think they don’t fall under this definition. Rather, a clich? can be something we don't put a big thought into and something we keep repeating - it can be an action, it can be a thought, it can be words, it can be anything.

Host: This is exactly what is interesting, that it is not just something in the form of a statement or in the form of writing something. Clich?s can also be behavior, right?

Maxim Behar: Yes, absolutely! Of course! The more we try to avoid these things that we keep repeating, the more interesting I think our lives become. If we struggle with clich?s in some way, unconsciously, for example when we are alone, sometimes we are thinking in the shower or in front of the mirror in the morning, or when we go to work, by the way, I do it from time to time as I drive to the office: “God, today I have to get away from all the things we're used to and I have to do something very interesting.”

Host: What are the most common clich?s in the Bulgarian reality? Can you give an example?

Maxim Behar: We have these clich?s every day. You know, the most dangerous clich? remains modern politics. I'm sorry I'm switching to politics.

Host: This has been a very exciting topic lately.

Maxim Behar: The fact that we think about politics in the same way without trying to change it, is quite harmful to society, because we vote every four years and then we complain, "Why did we choose these people?" and four years later, the same thing happens, and at a time when social media gives us something new every day, an online space where we can control every day or every hour or even a minute what people do in politics. The same goes for business, by the way. However, the business is much more flexible, because the moment a product or a service becomes a clich?, the same boring thing that everyone has, with no innovation in it, then customers stop buying, the business fails and other one appears. In politics, however, this is not the case, and it is just a very long conversation. Of course, this political system is no longer working, which for some reason we still call democracy. It must be changed, and If public clich?s disappear, daily clich?s won’t be an issue anymore.

Host: You mentioned something about the elections. By the way, yes, in this case they will probably be in four years again, but the election promises are also a huge part of the clich?s that we are tired of listening - words like "reform", like "change", like "huge change and supporting teams are needed" and so on.

Maxim Behar: Well, that's why I really think that the most harmful, the most dangerous and the most worn-out clich?s are in politics and we are all in some way subject to them.

Host: Why do people still believe in them, if I may say so?

Maxim Behar: Because there is no other system.

Host: There are people who get excited hearing the word “reform”, when we talk about the opposition again, and the very word "opposition" has also become a really worn-out clich?. People seem to forget about these things every four years and still get excited.

Maxim Behar: Yes, and somehow the voting itself is also a clich?, because we vote out of sympathy, or maybe the amount of promises that have made - also clich?s. This is directly proportional to the votes cast or received ones for a person.

Host: One of the great Hollywood directors mentioned in an interview that in fact the clich? is what makes people feel safe, in their comfort zone. Is that another for us to choose the clich? and somehow still following it in our lives.

Maxim Behar: That is also possible. Getting out of your comfort zone requires at least a little courage and a little creativity. Maybe a lot of people would not want to step out of their comfort zone, no matter how tiny this sauna is, no matter how cramped it is. But modern life, in my opinion, will take a huge number of people out of their comfort zone, because online media, social media are moving the world forward at high speed. The more we stand in our small comfort zones and repeat these clich?s to ourselves, and tell ourselves how good it is, the more life will throw us out and everyone else around us will succeed, while we keep saying, “Why X, Y and Z succeeded "," Why Ivanov became a director "or" Petrov became a millionaire, and I'm not, because I'm underestimated ". That's why we have to run away from clich?s, we have to fight them, and that's probably one of the ways we can get creative and come up with something new and move forward.

Host: Mr. Behar, let's make a transition to what we will discuss in a moment here in our studio - job interviews. How should we prepare for a job interview? Aren't those clich?s worn out too, isn't it a clich? to gather four people in front of you? And asking the question what salary do you expect to work? We have an example of my friend’s interview, who had sent a CV, they called him for an interview and he was extremely surprised that the questions he was asked were: “What do you do in your free time? "," What are your hobbies? "," What is your favorite sport? "," Do you have a family? " and so on. Nothing to do with his CV. Is this the new job interview that an employer should actually be practicing, or do we stick to the clich?, "How much money do you want to get?"

Maxim Behar: In my opinion, every employer and every company has its own way of doing a job interview. I have had a system in the company for years and I have written a lot about it in interviews and in my books. My latest book The Morning After describes in great detail how we manage our job interviews. Yes, I have a clich?, actually there are two of them: I never ask two questions. The first one is, "Where did you graduate from?" And the other one is, "Where are you from?" And take it as a clich?, but I think it's a practice that gives more freedom to the interview itself. I really don't care where they have graduated or where they come from. I can make an amateur - a professional in 5-6 months and we've done it many times, but I can't make a lazy one - hardworking. This has never happened to me. I can't make the intriguer a team worker or a good team member.

The second clich? is that while we do interviews, I always look the candidate in the eye and what I want to see is a little sparkle. That's not so much a clich? anymore, because it can manifest in different ways. I feel it and I can find out if a person is ambitious, wants to succeed, develop, get better, wants to get out of his comfort zones, wants to fight the clich?s and get into a creative team, where any interesting idea could find a place and motivation. Of course, the companies for hiring people, the so-called HR agencies, they have their own questionnaires and their own clich?s, while I motivate my colleagues - directors in the company, never to have questionnaires in front of them and never to ask the same questions. On the contrary - we need to understand who is standing next to us, and not against us, and we need to make sure that he enjoys his work more, because in modern business, if a team member, a colleague, does not enjoys his work, especially in this chaos at the moment, our work together becomes meaningless. We have to feel pleasure and this is beyond any clich?s, because today at 8 in the morning you can enjoy one thing, one event, one sentence, and at 11 o'clock something else is in your head.

Host: Maxim Behar for the clich?s, for the job interviews. In general, Mr. Behar, we can really listen and listen to you, but we still have to play music. I wish you a successful day.