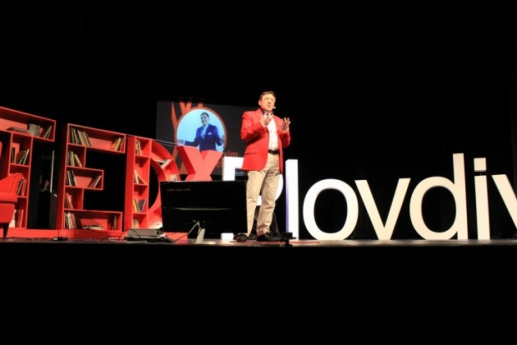 Maxim Behar to TEDx: We are all public figures now

The founder of M3 Communications Group, Inc. and PR expert Maxim Behar talks about the price each of us pays for our modern online life during the first edition of the International TEDx format in Plovdiv

January 1929, a long time ago. Imagine Sofia, half empty, during winter. Cold, wind, snow. Probably a few carts, carriages in the center. Several cars of the richer. And on the yellow cobblestones my grandfather. My grandfather went from bank to bank to get a loan. The largest egg trader in Bulgaria at that time with offices in Frankfurt, Budapest, Vienna, Bucharest. And since the great crisis began in 1929, he had been looking for loans so that he could import his eggs, which were waiting on the border, somewhere on the train, near Vidin. And he had to take a loan, pay his taxes, transfer the eggs, sell them, and that's how this system had worked for years. The bankers had been looking for him because he was rich, in order to offer him loans so that they could earn good interest from his deals. Then, however, in January 1929, everyone refused him, making him feel desperate. He went back to his hotel, Central Hotel, which nowadays is on Hristo Botev Blvd. and Stamboliyski Blvd., and with one bullet he ended his life. This is the price my grandfather Moshe paid. And no one has the right to judge him, not even me. This is how the man decided to pay the price his dignity being violated. And this story has, in a sense, a happy ending, because it had brought together all the people to whom he owed money and who had been waiting to buy his goods. Together with my grandmother, they had been saving money, importing eggs, selling them and everything had been cleared. And since then, at least for as long as I can remember, my grandmother Matilda has always said, "Maxim, what can be managed with money doesn't need your attention.” And there is a Jewish saying that if something can be done with money, then it is not a problem, but a cost. Money is a secondary factor. The most important thing is to be very focused and make quick decisions.

Today I want to talk about the price we pay for our modern life, that we are online and that everything is transparent. This price that accompanies our successes, our failures, our unfulfilled dreams and hopes, and good moments. The first element of this price is that we have to learn to speak many languages. A few years ago, I wrote a book "Generation F" and in it I predicted that in 2025 the world will speak a single language and this language is called "broken English". This is already happening, and it is happening because no one can predict the speed of changes. More than a decade ago, I was in Tokyo. I lived in Yokohama and travelled every day to Tokyo and spent a month at the world's largest advertising agency, Dentsu. On the last day before I finished my working period there, one of the eight deputy directors of one of the fifty-two directors came to me. He sat down next to me and said, "Behar, our President will meet you. You will have either 3 or 5 minutes with him. I said, "Great!" We went inside, and the President, very old about 90 years old, 1.20 meters high. I got my business card since I left the elevator. And at the door he bowed to me, I bowed to him back and said to him in English: "Mr. President, I am very pleased to meet you, thank you very much!" He took my business card, looked at it and said: "Behar. Ahh .. Bulgaria… Stoichkov, Yogurt,“ because these are the two recognizable Bulgarian things in Tokyo. Looking at the business card again, he came up to me and said, "Shit!" And I died. I didn't know what to do, and I said politely again, "Mr. President, thank you very much for your time, it was a great pleasure to meet you." He came even closer and said again, "Shit!"  Then the director approached me and said, "Behar, our President invites you to SIT." We both spoke the same language - English. This happened ten years ago, and nowadays it is even more complicated. Nowadays we write and post our Facebook messages in one way, we write emails in a completely different way, we communicate in a different way via WhatsApp or SMS. Not to mention Twitter, which is the aerobatics of modern journalism. And not only modern journalism, because in these 140 characters each of us has to write a message, which in the past, 10-15 years ago, we published whole newspaper pages with the same message. Not to mention that these days the President in the White House rules the world via Twitter with 140 characters in a message. And recently they interviewed one of his State Department employees and how his working day was going and he said, “I get up at 7 a.m., take a shower and go on Twitter to see what my boss has decided today and that makes my job very easy because everything is clear, accurate and transparent. That is, we must learn to speak different languages, and these units are not a function of vocabulary, a function of nationality or the state. Anyway, we all speak this "broken English". This is a small part of the price we pay living in the modern world. We have to think very fast, very dynamic. Every second is precious.

A few years ago, I had the opportunity to have lunch with Prince Charles. We were both at St James' Palace, and at the end of our lunch he said, "Sir, I have a present for you," and I replied, "Your Highness, thank you very much!" I was sure he would give me either a book about Buckingham or the royal family, or a tea mug with a label Buckingham or Prince Charles. But he told me: "I have invited several businessmen waiting for us in the next hall. Let's go have tea with them and you can tell them more about Bulgaria. You have 15 minutes to sell your country to them.” I told him, “Thank you very much, I appreciate it!” And at the same time my brain was boiling because I had no more than 2-3 minutes to think of something that no one knows about Bulgaria, something different that cannot be read in Wikipedia. And as we passed from one hall to the other, I just staggered with tension. He sat down in a chair. He placed a stool for me next to him. There were many CEOs of companies, sitting in armchairs, smoking cigars. He said: "This is my new friend from Bulgaria, and he will tell you about his country. By the way, my cousin was the Prime-minister there and he is still the King (King Simeon).” And that was actually the reason for his interest and desire to hear me saying a few words about Bulgaria. And I said, "Your Majesty, I don't need 15 minutes, I need 15 seconds." I turned to the people and told them, "Bulgaria is a WWW country." They suddenly fell silent, and Prince Charles turned and said, "Oh, Yes. High speed internet, good access… I've heard about it. Of course, I know that.” And I said,“ No. It's not about the internet. WWW means Weather, Women, Wine.”


And that shows how fast we have to think, how creative we have to be, and that every minute matters. And this story has a slight sequel. The following year I was in London at Buckingham for a dinner, and suddenly Prince Charles came to see me. I thought that he probably wouldn’t remember me, because I'm one of the thousands of people he meets. He approached me about 5 meters from the table, pointed at me and said: "I remember you - WWW". This means that we really have to be very creative and these things do not happen with much thinking and for the fact that you want to be creative or you are obliged by the situation. We should try not to miss the right moment. We need to be very ethical and in line with the transparency that everyone is exposed to, because the world is totally transparent. In 2001 and 2002, as chairman of the Bulgarian Business Leaders Forum, I wrote the first standard for business ethics. I went to all regional cities - 28 cities, to talk about what it is like to do ethical business. After all, in 2001 Bulgaria was even another planet, not another country. There were completely different relations in the country. Many people asked me, especially in small towns - Lovech, Gabrovo. Once a man stood up and said, “We really liked this presentation, everything was very colorful, but what is business ethics? Could you explain? I had to come up with a definition in literally a few seconds, and I came up with it. I told him, "It means to make profits transparent. We are the business. We need to make profits to pay salaries and invest, to feel better, to make my colleagues feel better. If we make it transparent, it means that it is clear, accurate and fair. That's why I like the modern world much more now than before, because everything is transparent in the end. Even my business - Public Relations. It can no longer be called Public Relations because its meaning it’s not related to the present. This business was invented in America about 120 years ago, when 95 percent of relationships were not public and only 5 percent were. All relationships have been formed in hotel lobbies, up and down, between people, in private conversations. The companies had a small part of public communications, which at that time were mostly assigned to journalists. Now everything is public - 100 percent. Even when I travel around the world and give presentations, I think a lot about how to explain what my job is when I’ve been asked. because PR is equivalent to clear glass or wet rain - it practically doesn't make sense, because all our relationships are public. One day, in time, my business will probably have a completely different name. It can be "live relations", because everything is currently valuable when it is live.

And last but not least, and I will link it to the story I started with my grandfather - we must preserve our dignity. This is part of the great price we pay because we are all public figures. Only a few years ago, public figures were journalists, athletes, politicians, showmen. They were shown on television and their names were known. Now a taxi driver with a second-hand laptop in his garage, as long as he has something to say and knows how to say it, can reach several billion people. This means that he can become more public than any politician or athlete, or any of us. And because we are all public and at risk, our authority and reputation must be damaged, we must always and at all costs preserve our authority and our dignity. And here are some of my colleagues in the hall, and they know that every Monday when we get together and discuss clients and comment on what's going on with our business, I tell them, "We don't have to compromise on just two things in our business - our health and dignity at no cost."