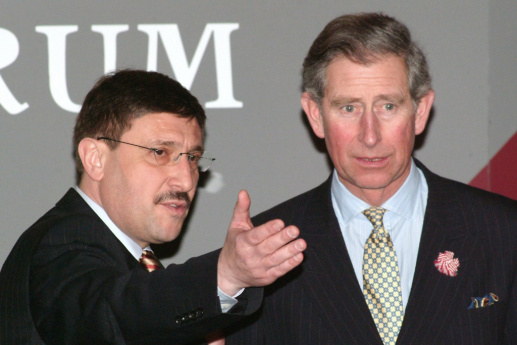 Priceless Lessons by Maxim Behar: A Story with Prince Charles

Maxim Behar’s second story in the series " Priceless Lessons" for BusinessGlobal magazine, tells a story from the end of 2002, at St. James's Palace in London, where he was welcomed by Prince Charles.

In the series, the PR expert talks about his meetings with global celebrities through the prism of his business, about the lessons derived from such stories, and what he has learned in a purely PR aspect.

In the modern world, events most often begin with a newly received email. In this case, however, it happened in a completely different way, and I did not expect a prime minister to send me an e-mail… The phone just rang, and my assistant said that the Prime Minister, or rather the King-Prime Minister, would like to talk to me. "Behar, alive and well - typically for him began with a greeting - next week I'm going to London, there will be a business forum, isn't it good for you to join us…".

Only months ago, I was elected Chairman of the Bulgarian Business Leaders Forum (BBLF) and back then he was part of an organization headed by Prince Charles, and logically it would be very interesting for me. We easily became co-organizers of the forum in London, I had to bring a gift to the Prince. Without thinking much about it, I called my friend Gilbert McCall, who was part of the board of our Forum and Managing Partner of KPMG Bulgaria. One Sunday afternoon we wrote together the first in Bulgaria "Standard for Business Ethics". Now it may sound quite archaic, but then the words "business ethics" in Bulgaria were more like scientific terms than specific content.

This was exactly what I was going to give to Prince Charles in London during the forum he and the King were to open. What could be better than presenting him our work on ethical business in Bulgaria. However, the long-awaited Prince Charles did not come to the forum in the beautiful hall of the Bulgarian embassy, without knowing the reason. He was replaced by the European director of his forum, Susan Simpson, an elegant lady with a large hat and a crocodile-skin bag that I had known from a number of meetings before. But I had two standards, one for the King, which I gave him on stage when I opened the forum, and one for Prince Charles. But instead Susan appeared with the big hat and reached for the beautifully shaped frame.

I had to get out of the situation and with a serious tone I turned to her on the microphone: "Susan, what I'm giving it to you is actually for your boss, Prince Charles, so please tell him that if he doesn't come to Bulgaria soon, you should give it back to me… ”. I broke the tension in the hall with about 250 people inside, and of course, they laughed, took it as a joke and so we smoothed things over.

Less than a week later, however, an invitation came to my office from His Royal Highness for lunch at St. James's Palace, where he lived at the time, on a certain date at 11:30. Well, I was supposed to be at the Royal Automobile Club at 7 o'clock in the morning, two minutes from the Palace, to be instructed on how to get through lunch, but that didn't matter to me, the final goal was far more important.

We had lunch. Decently and calmly, we had a very interesting conversation about everything, mainly about business and how it should be ethical and transparent. I handed him another copy of the standard, and as we were finishing, the Prince turned to me most unexpectedly:
- Sir, I was very pleased that you came, I have a small gift for you.
-"Oh,” I replied, “so kind of you, Your Royal Highness."

I was sure I would get a teacup with the Buckingham logo or a photo album from the palace we were in, when he continued:
- I have invited several friends from the big business in the next room, let's have tea with them and you will have about ten minutes to present Bulgaria to them in the best way…
Oh my God! What could I say to British businessmen about Bulgaria that they don't know! ... A search engine like Google will tell them everything in three minutes…

I had no more than ten seconds to think, we were already getting up from the table and the other hall was about a hundred meters away. We entered, the gentlemen - five or six - rose from their seats respectfully, Prince Charles introduced me as "my new friend from Bulgaria, where my cousin King Simeon is prime minister" and gave me the floor.

I had to, I really had to wake them up, these people casually stretched out in their chairs with cigars and a cup of tea with cognac in hand.
- Gentlemen, I really come from Bulgaria, a wonderful WWW country!

There was a long silence, which Prince Charles broke first.
- “Oh yeah! Really! I have heard that you have a faster internet than many other countries in Europe.”
- "It's true, but I didn't mean that. Remember - WWW for Bulgaria now means Weather, Women, Wines.”

They started laughing, and that was the sentence that broke the ice. We had a great conversation about investment opportunities in Bulgaria.

Of course, from the very beginning I clarified that this comparison is attractive, but figurative. Weather, these are our four seasons, the wonderful opportunities for tourism, Women - of course them, but mainly people, smiling, educated and ambitious, and Wines, but not only them - the mixture of different cuisines makes our food to these wonderful wines attractive and insanely delicious…

WWW - invented literally in seconds in the transition from one hall to another in St. James's Palace, for a long time it was used by many in Bulgaria and around the world. Back then I really brought an invitation for the Prince to visit Bulgaria, and only after three months he really arrived. I will never forget how I met him at the back entrance of the Sheraton Hotel, where he came after his meeting with the President to meet with Bulgarian business, and when he saw me at the door, he pointed at me and exclaimed: "Ah, WWW! I remember very well! Nice to see you again.”

Often interesting things in my business happen in ten seconds, but they keep their fame for much more than ten years…

What I learned from one of the legends of the world PR business Terence Billing - in the next issue.