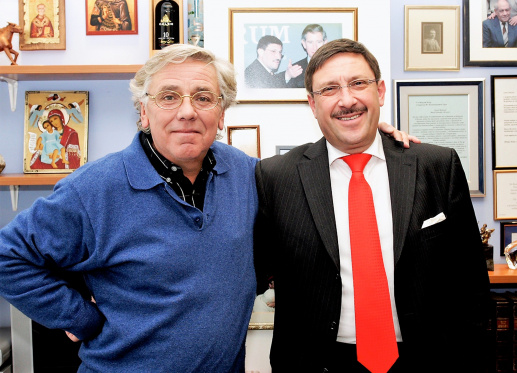 Priceless Lessons by Maxim Behar: A Story with Terence Billing

The third story of "Priceless Lessons" by Maxim Behar for BGLOBAL magazine, where he shares his meetings with interesting people and the PR and business lessons he has learned from them.


On The Top of The Pyramid
A story of a hot evening, cold white wine with soda, Hawaiian shirts, rock star hairstyles and the priceless lessons of Terence Billing in a small Italian restaurant in central Frankfurt...

...It was a very warm day in July and I had no intention of even showing my nose outside.

The central Hessischer Hof Hotel in Frankfurt, just opposite the famous Messe grounds, provided coolness and cocktails from the refined bar, gave an even more charming atmosphere and seemed to relieve my tension before the meeting... The meeting!

Just a few months earlier, I had spent nearly 30 days crisscrossing America from East to West and back in search of the best PR experience. It was year 2000 and I had spent six years already in business and trying to find the right experiеnce, and I already knew that America was the place to get the best of it.

And during this visit I was having a cup of coffee standing in the LA office of Hill+Knowlton  with the local CEO. At the end of the meeting he suddenly took his cell phone from the desk, dialed a number and shouted loudly: "Hey... Howard... I found you a great person for our office in Bulgaria!". Howard Paster, then Global President and CEO of the world's largest PR corporation, sent me an email the next day and invited me to meet with Terence Billing, the company's Executive Vice President.

That name didn't tell me anything, except that, for some reason, I was inwardly convinced that Terence was a female name, and I addressed my e-mail with "Mrs. Billing." Terence sent me back in minutes angry email as a response, but still fixed me a date to meet. Sunday. In the afternoon.

So... I was standing in the lobby of the Hessischer Hof Hotel, dressed as I should have been at the time - a colorful Versace tie, a locally produced new white shirt and an old fashioned but still official black suit bought from the second hand market downtown Sofia... That was my first high-level business meeting, and I thought I was really dressed properly for it. And of course... in a plastic bag in my hand I had a company brochure and two bottles of Bulgarian wine... Eastern European Classics!

While I was sweating in my black suit, the revolving door of the hotel swung open, and a man in his fifties burst into the front desk, in shorts, flip-flops, and a Hawaiian shirt, with long hair, glasses, very much look like mid-70s rock star and asked for my name quite loudly. I immediately jumped to introduce myself before the girl at the front desk called me even. The "rock star" looked at me inquiringly and, without even handshaking, said:

- Max, this outfit is not suitable for me at all, we can not meet like that. Quickly run upstairs to the room, put on your jeans and T-shirt, and come back downstairs to talk, please.

By the time I returned, Terence had drunk already  his favorite half a bottle of white wine with soda, looked in my eyes for quite long time, and his first sentence was:

- We will sign a contract, do not explain anything to me now, later you will tell me more. But I can tell you from now – I like you, we can work together.

An hour later, Terrence and I were sitting on the terrace of a small Italian restaurant behind the hotel, and he glanced at me as a sign to begin speaking.

After all - I was coming from Bulgaria, even if I can say, from "that" Bulgaria, with the bad image from the front pages of European newspapers, with the legends about the mafia guys and the iconic murders. And I started right away:

– I have a company called M3 Communications Group, Inc., we are a very young, wonderful team, and we are very honest, transparent, honorable…

My list of advantages I was stressing on was endless. Terence drank slowly from his typical wine with soda and after listening to my monologue, for about an hour, then put back his glass on the table, looked me straight in the eyes and said:

- Look, my friend, if you continue this way – your company will bankrupt in a few months, believe me…

I felt a cold sweat, especially from the fact I was talking to the legend of global PR from whom somehow I was expecting a pat on the shoulder and encouraging words.

- Listen Maxim, imagine a pyramid. You have two equal parts at the bottom that support it - the customers and your know-how... As many as you have, it mainly depends on what will be at the top of this pyramid... Do you know what it is…?

I looked at him confused and worried. I felt like I was taking an University exam… Did not answer. Just kept silent until we finished the pasta and the mascarpone dessert, and when I was thinking about how to get away this unusual and painful conversation, Terence suddenly continued:

- Profit, profit, my new friend... This is the most important thing if you want to be in business. Be ethical, be honest and fair, do what you want, but if you don't make a profit at the top of the pyramid, you don't have a business.

In the years that followed, I had hundreds of meetings with Terence, every summer I stayed with him at his house near Frankfurt, we spent endless evenings with icy white wine and soda in his garden, and we also talked endlessly about business, PR and details in this fast changing business. His visits to Bulgaria turned into valuable presentations and lessons for our whole company, and he really liked to stay for hours in our office and talk to the team…

It so happened that I was next to Terence Billing's bed in his last hours in a Catholic hospice, perhaps meters from the same legendary Hessischer Hof Hotel. He stood speechless and looked at me with his good-natured gaze as I was telling him about our company, about the incredible successes, about how we won The Holmes Report award for the best PR consultancy in Europe, how I was elected President of the International Communications Consultancy Organization (ICCO)... and how basically everything came from that memorable first and so priceless business lesson in Frankfurt.

A single word, simple and ordinary, which can open not only the eyes, but all the paths to business success.