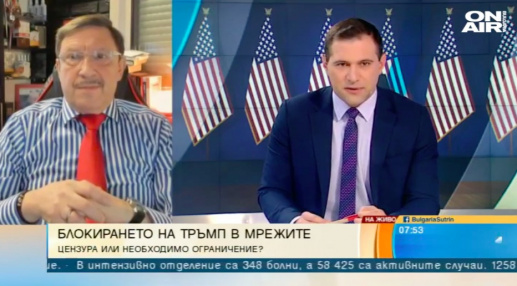 The PR expert and diplomat Maxim Behar commented on the approach of the major social media ban and impose censorship on Donald Trump after US Capitol riots - online interview on the Bulgaria ON AIR show Bulgaria in the Morning with Zlatimir Yochev.


Host: We will take a look at an expert view of a person who deals with and handles information. It's no secret that information is an exceptional commodity and has a huge impact on the modern world we live in. Some experts say that democracy itself requires information and when information flow is interrupted in the way they did to the American President by banning him from major social media networks, it is a negative and alarming signal. This topic on Donald Trump's social networks ban was largely commented and have reactions from global leaders like Angela Merkel, who defined the case as problematic. Other people claim that all this is a Trump card in the hands of authoritarian ones and that they will benefit greatly from the situation after saying, "You see what is happening in the United States… Why don't we do the same in our territory?"

Now the PR expert Maxim Behar will comment on the suspension of the social networks of the US President. Good morning, Mr. Behar!

Host: Is what we observe problematic? Not only because of the rare scenes of aggression in the US capital Washington, and elsewhere, but also because access to a man who seemed to run the country via Twitter throughout his 4-year term was severely restricted.

Maxim Behar: I think it is very problematic. Maybe this whole story about Facebook, Twitter and other social media is equal in importance to what happened the US Capitol riot. The riot will be soon forgotten, and measures will be taken. What will be remembered is the fact that a still-active President was banned on social media, when he had been tolerated for four years of posting all sorts of messages, stories and nonsense, even hate speeches and threats. At one point he turned out to be super dangerous. And something else. Given that for the past 20 days Twitter has been full of warnings by rioters to overrun the Capitol buildings and the capital in general, nothing has been done to stop them. Everyone knew which hotels they gathered at, what weapons they carried, what alcohol they bought. Instead, it turned out that you have to cut a person off forever, remove his whole history - all these 4 years and before that оn Trump’s Twitter and Facebook account. This is quite embarrassing, mainly because there are no clear explanation based on specific precise criteria why exactly he is banned now. I'm not defending Trump, neither his actions over the years and all the conflicting messages he has sent in the last month. It is simply a reaction of a person who does not know how to lose or does not want to lose. However, on the other hand, this is already a big case, which is literally on the border between tolerating such accounts or profiles on social media or having clear and precise rules on what is allowed and what is not.

Host: That's right. Many people say that at the moment some authoritarian leaders are also inciting violence unimpeded, such as Bashar Assad, Ayatollah Khomeini, Maduro, and others all over the world. They also use social networks, and sometimes call for wrong causes. However, there are no reactions. On the other hand, you mentioned something very important - monitoring systems. Couldn't these social networks have prevented the the Capitol riot, given that information was circulating there and had existed for weeks, even months before it happened?

Maxim Behar: Of course they could. We will be watching many films on the US Capitol riots in the coming years. And probably some of these films will actually propose that everything was script, and it was all well organized so that Trump would be trapped with no escape. But of course, social media could prevent at least the exchange of information and all this publicity, communication and connections. This turned into a big drama. Today I read a long tweet by the owner of Twitter, Jack Dorsey, which was almost equal to a whole poem, given that we are all forbidden to post more than approximately 160 characters. The post states that Trump's ban on this social media platform was the right choice, but that case could set certain conditions and regulations which needs to be followed by any account on social media, or otherwise they should be banned as well.

Host: Mr. Behar, does this leads to the topic of the new oligarchs, the new ones in power globally, such as Zuckerberg, Jack Dorsey - those people who can make global decisions by themselves. We discussed that with Ivo Ivanova a while ago and he said: “These are private networks. At their discretion they can literally push the button and stop you. By stopping Donald Trump's channel, which was followed by 89 million people, they cut off his access to all of them. He can find side doors, but he is used to communicate with them there.

Maxim Behar: I am not very sure that we can call them oligarchs, because we know very well the formula for oligarchs - people who are engaged in business and are connected with the Government. But in the end, these are people who really have a lot of influence, strength, and power. We have Facebook since 2004 – almost 20 years. During the first ten years we were all using social media (Facebook, Linkedin, Twitter, Pinterest and Instagram) as a means of pleasure - to share, to like people, to chat. However, naturally, social media has turned the world upside down. This is a very powerful and dangerous weapon of influence, which I am not sure should be regulated in the way it was done with Trump. Clear and precise rules for use are needed. All this hurricane of hatred, especially on Facebook, because there you can afford longer posts, photos, videos and you can attack your opponents more arrogantly - all this can be easily regulated with artificial reality or some software to restrict certain words or sentences. The point, however, is to have clear rules, and they cannot be created by one person, whether it is Zuckerberg or Dorsey, or someone else. Although I am in private business, I am very liberal about business freedom. I believe that when there is a monopoly, especially on the media - in this case a global monopoly, there should be some state regulations that indicated clearly when this monopoly can make a decision alone and when it should be consulted with the relevant authorities.

Host: In absolute sync with what you are saying, is it good to remind people that two years ago in 2018 in the same Congress and US Senate we watched Mark Zuckerberg giving an explanation for a huge Cambridge Analytics scandal? Have they forgotten it? Tere was a huge leak of information to millions of users, and then Zuckerberg said, "We made a mistake." The same social networks that sometimes misuse our data, our information that we voluntarily give. I mention this because it turned out that $ 200 million in funding for Joe Biden's campaign came from Silicon Valley companies. Therefore, the connection between politics, Government, social media networks, and IT companies is quite clear and obvious.

Maxim Behar: Yes. Now it is happening with Biden, and in 4 years it will happen with the next one. There must be clear and precise rules. First, the funding of the politician campaigns in the United States is quite transparent and subject to regulation, and we can still know the connection. I return to the subject of oligarchy. For oligarchs, this connection is usually quite vague and quite secret. However, the connection between Biden’s campaign and these big technology companies is visible. A few years ago, these big technologyonly companies waved the flag of media freedom, assured they actually give new power to the people and their word can be heard. But again, I think what happened to Donald Trump now and during his 4-year term is a pretty serious case we need to think about- not only the people in power, but all social media users. Especially those who in some way influence other people.  You can have one follower and have an influence on him. This should not be underestimated.

Host: Thank you, Mr. Behar! It was a pleasure to discuss with you and I think we gave people a reason to think.