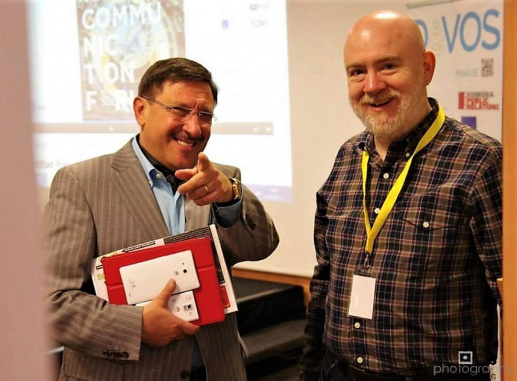 Priceless Lessons by Maxim Behar: A Story with Paul Holmes

Maxim Behar, CEO of M3 Communications Group, Inc. and a representative of Hill + Knowlton for Bulgaria, shares another exciting personal story in his author's series "Priceless Lessons" for BGLOBAL magazine.

The Tsunami Below The Peaks of Davos

Paul Holmes is the man that captivates the attention of different managers around the world who listen with bated breath to each of his words and write them down on their tablets without even looking at him.

... Zurich Airport is not one of the largest and often while taking a few walks for about a hundred meters to stretch your legs after the flight, you can easily meet someone familiar, have a conversation and you can suddenly find yourself sitting with that person at the meeting point cafe without even realizing.

However, this time I'm by myself. I'm travelling to Davos for a few days for the World Communication Forum, and while I'm ordering another espresso, someone pats me on the shoulder very timidly and whispers: "Hey Max, take one for me, I'll return the favor when we arrive in Davos “...

Ah, I recognized that voice at once! Anyone in the PR business, who had even the tiniest experience outside Bulgaria and had the chance to explore the international trends in the industry, would recognize this voice with a blindfold. It was Paul Holmes!

In fact, our real acquaintance began years ago while he was hosting his global Sabre Awards ceremony in the great Nobel Hall of Stockholm City Hall. For the very first time I felt as part of a large group representing the American international PR company Hill + Knowlton Strategies.

I had another chance to hear more from the extravagant Paul in the company of my American friends at the no less extravagant top-floor restaurant in the Reichstag building in Berlin a year before. I diligently wrote down his predictions and just watched them come true one by one over the years. But somehow among the drinks and full plates in the restaurant, even the notes were not as complete as the feeling of talking to Paul in private.

So… at the end of the gala dinner in Stockholm while my Hill + Knowlton's colleagues were walking around the other tables, I was sitting by myself in front of a cup of hot coffee. Suddenly, someone pulled up a chair, sat down next to me and said:

-    Hi Max, I'm Paul, I'm organizing all this here. I know who you are, and I just came to tell you that I want to visit Sofia in the upcoming weeks and meet you there...

Paul really came to Sofia and met the whole Bulgarian PR community. We became good friends, spent time together in piano bars and other places that made him fall in love with Bulgaria. We had a lot more forum meetings, we discussed and even argued respectfully sometimes, but we got to know each other well. And what was most satisfying to me at these meetings was the fact that Paul often listened to me very carefully.

So, we found ourselves together in the taxi from Zurich to Davos, which is quite a challenging experience late at night, because the road is an endless series of sharp turns and deep snowdrifts. As he was surfing on his iPhone, Paul suddenly looked up and asked, "Max, what do you think about social media, is it going to change your business?" The pronoun “your" was very appropriate. Paul is a well-known analyst, a futurist, he makes accurate predictions, but he is also known for the fact that he has never done a single PR project in his life, nor has he worked in an agency. "Paul," I answered, "there's going to be a big change, a huge one." This was back in 2009 and I was quite cautious about my predictions.

The next day, already on the stage of the Davos Forum, with his favourite jeans and American plaid shirt, Paul was walking back and forth with a very wide stride along the stage. He suddenly stopped, spread his arms and said: "Last night Max said there will be a change because social media is rising. But here's what I'm going to tell you - get ready for a change, get ready for a tsunami - a real tsunami. Your whole business will be swept away and a new one will come."

He was more than right. As always!

Late one evening, about two or three years later, I received a strange text message from my colleague Sconaid McGeachin, who was managing the entire Asian region of Hill + Knowlton from Dubai back then.

"Max, congratulations! Your company has been named The Best Company in Central and Eastern Europe. We should celebrate! “

I couldn’t believe it. I thought it’s impossible... there are tens of thousands of PR companies in this region. I immediately went online, checked the news on The Holmes Report and... oh my God, it was true. I had a glass of wine and went to bed. Of course, I couldn’t sleep much longer... woke up at five in the morning and came back straight to my computer. I went to the site again and our company was still there. On first place… Barely waited for the morning hours in New York and I called Paul and almost scolded him: "Why didn't you tell me, why didn't you ask, how come we are there when we never applied?" "Max," he replied, "this category does not require companies to apply. It is simply won by the one who shows best results during the year. I came and checked right on the spot. That was enough for me!"

Really, that was enough!