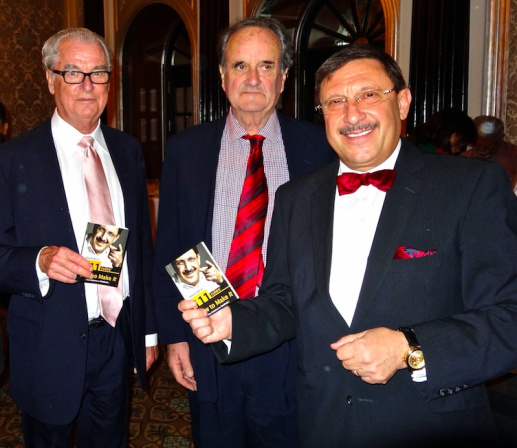 Midnight conversations at the cricket club in Mumbai

Late drinks with Lord Timothy Bell and Sir Mike Tully, stories about ethics, and the lessons worth learning, even for legends...

Mumbai’s cricket club, the oldest “British treasure” in India also presents itself as the most fitting place for a drink in a friendly atmosphere. This evening, it was clamorous with numerous tables and booths totally occupied. A rich bouquet of different languages flowed through the space of the club, carried out by the large fan blades of the property.

Our dearest friend and host, Yogesh Joshi, had taken care of every single detail regarding our residence. All sorts of languages, dialects and arguments floated in the air. New acquaintances were made through the night and my new friend Solly Moeng and I sang aloud in Zulu language the South African anthem “Nkosi Sikelel’ iAfrika” while our performance was accompanied by the clapping of our colleagues.

And in this motley company with friends from all over the world, who had come to attend the annual meeting of the Association of Business Communicators of India (ABCI) two sophisticated, middle-aged men showed no signs of enjoyment. They seemed strict and focused on their plates. I sat down next to them, since we were ordering our last drinks for the night. It turned out at that very moment, we had not only started one long and incredibly interesting conversation, but a deep-rooted friendship. The two men are true British gentlemen and people with titles and traces in history - Lord Timothy Bell, the PR expert and trustee of the legendary Margaret Thatcher, and Sir Mark Tully, the BBC correspondent who had first reported the assassination of the Indian Prime Minister Indira Gandhi in 1984.

-    Well, that is so interesting... Bulgaria... I had no idea you have PR agencies there – said Lord Bell in a drowsy tone – one day I will visit the country and have you to introduce me to the market and the experts there.

I told him more about my meetings with Prince Charles and that is when I caught his attention. Lord Bell visibly brightened up and began to question me insistently.

-    Ha, Charlie has a Business Leaders Forum? I had no idea! Could you tell me more about it? I live a few miles away from him but haven’t heard of this.

Needless to say, I knew who Lord Bell was and I had read thousands of stories about him, especially about the post-Thatcher era. I was also aware of the stories about his work for Russian oligarchs and controversial political figures... So on that hot Mumbai night I chose each and every word that came out of my mouth with extreme caution.

-    Well, you know, Your Excellency, today it is inconceivable to do business without transparency... So inspired by His Royal Highness the Prince of Wales, we have set up a forum with numerous companies who want to present themselves as transparent business leaders.

He did not hide his great amazement towards my statement, and to my astonishment, he was highly interested in our dialogue, rather than in his dancing friends. Simultaneously, I did not want to get into unnecessary arguments with people who had done wonders in the business industry and are true legends. Sir Tully also listened to our conversation with interest, a man with brilliant journalism practices who made the world’s announcement of Indira Gandhi’s assassination. Lord Bell had the exact same historical moment in his rich biography, and only months before I met him, in April 2013, he was the first to announce the death of his “patron” – Margaret Thatcher.

-    Lord Bell, - I continued even more carefully - I do not wish to argue with you during our late drinks, especially when I am aware of your undisputed professionalism, but let me share with you my opinion. It does not matter if it is Bulgaria, Rwanda, Chile, America or any other country. For more than ten years, we have been introduced to social media and no matter what we do or what actions we take, there are at least three billion people potentially observing our movements. As a matter of fact, everyone knows everything and the public control over political figures or even PR experts is irreversible. As a consequence, there is only one possibility for businesses in order to survive, and it is called full publicity.


God, I did not mean to sound instructive, but we all might have had a few drinks. Lord Bell got up from the booth, started seeking out for his driver, waved at him and said something resembling like a "good night" wish. Then he melted into the dancing crowd on his way to the exit.

The following evening, the well-known traditional Gala Dinner at the phenomenal Taj Mahal Palace took place. I had the honor of presenting one of the ABCI awards, considering that a year before the exact same association announced me for “Communicator of the Decade”, and this automatically became part of my duties as a winner. In addition, the association had printed 2,000 copies of my booklet "111 rules' How to Make It", which we sold for 10$ each and were out of stock within an hour. It is no secret that later on I donated the funds raised to the flood victims in India at that time.

But before I got up from my seat to present the price, I felt Lord Bell’s hand from the seat next to me, which brought me back at my starting point. He then pulled the booklet out of my hands, went to the glorious stage, stood behind the illuminated chair, and lifting the book above him, said: “Good evening, ladies and gentlemen, I am Lord Timothy Bell and let me tell you something…You should buy this book! You will not only help our brothers and sisters, affected by the floods in India, but you will also have the opportunity to learn a few lessons from the man with the mustache and the red bow tie sitting next to me. I have already learned my first lesson from him.”

Believe me, this could only be done by a great man who knew very well how to teach others and did not bother telling them that he had learned something too.

Couple of years later, Lord Bell expressively left his own global PR agency, Bell Pottinger, when the entire business world rose up against his company’s unethical methods in its operations in South Africa, after leaked emails in different social media channels. And when he moved to a better place in 2019, Richard Edelman wrote: “He was an eccentric and ostentatious man. But we must learn from his merits for the world’s PR industry. And for what he did not do right, we must learn how to do better”.