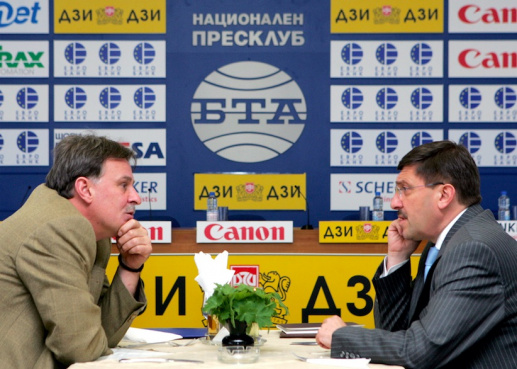 Maxim Behar for LIK magazine: A Story with Maxim Minchev

An instructive story about a memorable friendship, told by the leading PR expert Maxim Behar for the monthly edition of LIK magazine, issued by the Bulgarian News Agency (BTA).

In memory of Maxim Minchev, Bulgarian journalist and Director General of the Bulgarian News Agency.

A lunch, ordered from Hilton hotel, worth a thousand words.

It must have been a week or two after Maxim was elected Director General of BTA and we gathered our “Big Four”, as we liked to call our group, which consisted of me, Maxim Minchev, Martin Zahariev and Antoni Georgiev. Once every few months, we gathered the crew for lunch and, believe me, only Antoni knew how much and where we had met all over the years. Throughout our lunch dates, Mr. Georgiev was certainly the only one, who collected data on our meetings, in his notebook, typically to make sure whose turn was to pay the bill.

At this very moment, we clearly decided it was Maxim’s turn to pick up the check, since he was recently elected Director General, and he anxiously asked:

I took the opportunity and answered him, as if I was already prepared for his question. Over the years I had the honor to organize many press conferences in the Agency’s hall on the top floor – frosty, uncomfortable and a dusty place with timeworn squeaky chairs. But this time being, the charmless venue we held our meetings in, was our only alternative. Well, except for the high priced 5-star hotels in Sofia, which to this day I find unbefitting for such occasions.

-    Maxim – ‘I almost shouted at him’ - renew the hall and the furnishings, maybe even set down a climate control system. It is excessively hot in the summer and ridiculously cold in the winter. Place some translation booths and sound recording devices. Believe me, this place is a gold mine for the Agency profits. You will get the money back after a year or two, and only from renting it to customers like me.

Maxim shuddered, took out a notebook and started writing for what it seemed as ten minutes. His action did not bother us at all, since we were actively ravaging our traditional Bulgarian Shopska salad as a starter.

I had forgotten about this conversation, until one day I was attending a conference in London, if I am not mistaken, and my phone rang. The meeting was over, and I left the hall and headed out to the hotel lobby. Maxim called me again, and he was undoubtedly quite insistent.

-    Max, I am looking forward to seeing you in an hour. We are opening the new Press Club and it looks astonishing. I bet you would not be able to recognize it. And since you gave me the idea of renewing it, you are pronounced a Godfather of the club! Come on, we are all waiting for you to come!

I was quite upset. Somewhere along the communication, my invitation was lost. There was no possibility for me to postpone the London’s trip, but at least I would have gone to see him and the renewed hall. My reaction towards him was sharp and I said firmly that I never appear uninvited. I perfectly knew I was wrong, which cost me a mood swing, but as a matter of fact, I am an emotional persona, especially towards my close ones.

It was a long-forgotten story, until Maxim reached out to me again and offered me a coffee date so he can present me the Agency’s new hall. But one of his requirements was to meet midday as he was busy in the morning.

I stopped by BTA at 12 pm, Maxim came, and we had our coffee. Then went upstairs and he opened the hall door. To my astonishment, the room was completely empty with no tables or chair in it. Except for one coffee table in the middle of the hall with two plates, champagne glasses and silver appliances on top of it. Next to the table, a waiter in white uniform, a bow tie and gloves was standing, waiting for us to sit.

I was completely stunned. Maxim looked at me and said with his super artistic and identifiable ‘’r’’ pronunciation:

-    This is our lunch. I ordered it from Hilton hotel. It is to apologize for not inviting you. Right now, it is the grand opening of the hall. And it is just for you.

An artist and a friend, who always knew how to apologize. One of a kind.