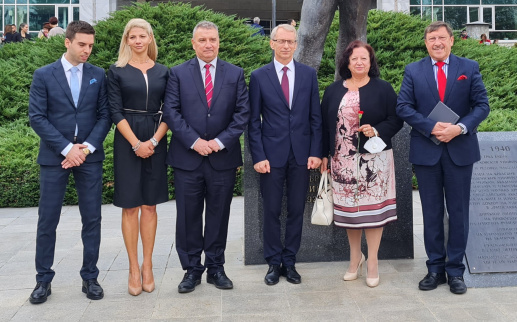 Maxim Behar was one of the honorary guests at the opening of the New Academic Year 2021/2022 of the oldest economic university in South-Eastern Europe - University of National and World Economy (UNWE), as a member of its Board of Trustees. Among the participants in the celebration were the UNWE Rector Prof. Dr. Dimitar Dimitrov and the Bulgarian Minister of Education and Science Nikolay Denkov.

After the official ceremony, a conference was held to present the strategic project for digitalization of higher education - "Economic Education in Bulgaria 2030", with which UNWE will have the opportunity to be further developed as an educational and research institution after the COVID pandemic and to modify its curricula in accordance with the modern business practices.

The project is focused on four main goals: establishment of educational standards, digitalization of the educational process, setting conditions for entrepreneurship of students and teachers, and improving the quality of teaching staff and academic research.

Maxim Behar sent cordial wishes to all students and colleagues starting the new academic year, as well as for the successful implementation of the project for modernization of the economic education in Bulgaria.