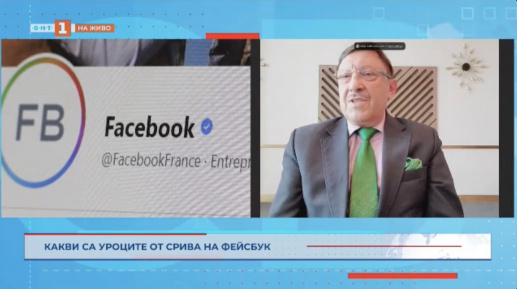 Maxim Behar commented on the large-scale global collapse of Facebook, Instagram and WhatsApp which lasted more than 6 hours, how dependent we are on social media, can we count on them, who are the affected and more on the topic in the show The World and We on Bulgarian National Television with the anchor Joanna Levieva-Sawyer.


Host: Facebook CEO Mark Zuckerberg had to apologize to all Facebook, Instagram and WhatsApp users. Social networks were unavailable for more than 6 hours. There has been no such large-scale collapse so far. The company explained it with a technical problem. The accident affected consumers around the world. We commented on the topic with Maxim Behar - a PR specialist with extensive international contacts.

Mr. Behar, first of all, tell us briefly how did you feel about this outage as a person who is extremely active on social media, both professionally and personally?

Maxim Behar: Good afternoon! Nothing that serious has happened. One can burst a tire while driving, the electricity can shut down. Look what is happening in the UK at the moment - there is a massive petrol shortage. Of course, it wasn’t comfortable to have such social media shut down but it's part of our lives, and we need to understand that all of these online platforms and the Internet are vulnerable, and everything considered in category “technology”. Such things happen and we have to be ready. Of course, Mark Zuckerberg himself probably wasn't prepared for such Facebook's slumping stock price, but these things happen and we have to be completely ready because it's part of modern life.

Host: You compare Facebook with electricity and water. It appears we are more dependent on social networks than we ever expected. Can you explain why this is happening and whether they should still be more regulations?

Maxim Behar: First, Facebook is a free service unlike electricity and water, and that's the big difference. As far as I follow the messages and what the company reports very briefly, it could be a result of an issue with Facebook's servers, it may have been a cyber-attack. I believe we are about to find out the reason soon - this is a public company and there will hardly be any hidden information. But again, we have to be prepared and live with the fact that any technology could fail and I don't find that scary at all.

Maybe just two types of people could be disturbed by that. One is the Bulgarian politicians who, especially in the current election campaigns, send their messages mainly through Facebook. They even make TV shows there. They may be worried. And the others, of course, are the so-called influencers, who earn some money by promoting goods on their Instagram, Facebook and all other major social media accounts. But they will also understand that, in the end, nothing is eternal, and each technology must be approached with great doubt. When discussing Facebook, I think it is much more dangerous when there is racism, aggression, probably pedophilia and thousands other cases, than the Facebook outage for a few hours.

Host: That's right. This outage actually happened hours after shocking revelations on CBS TV by a former employee of the company. She said Facebook prioritizes its economic growth over users’ accounts security. The former employee is also expected to testify before the United States Senate committee. Will this lead to more serious regulation of the online environment, similar to the European Union?

Maxim Behar: The online environment was already regulated enough. What is left is more strict regulations on communication tone, the content of users’ messages and their profiles in general, which I do not believe will happen, because we have already seen this and we still see it in the so-called democracy or pseudo-democracy that they have. There can be no other regulation than the one determined by law. What happened yesterday, these six hours of outage, raises a big question for us how we should behave on social media, how we should use every word and sentence, how it is more than necessary to send positive messages to our followers, to discuss without anger, but only clear arguments.

Of course, the content that predominates on social media should be less political and more interesting and educational. In my opinion, the lesson learned is that nothing is eternal in this world and we are addicted to technology - something we all knew, especially when these services are free, such as social media.

Host: Maybe in the future that will change as well. Mr. Behar, thank you for your comment.

The interview can be watched here.