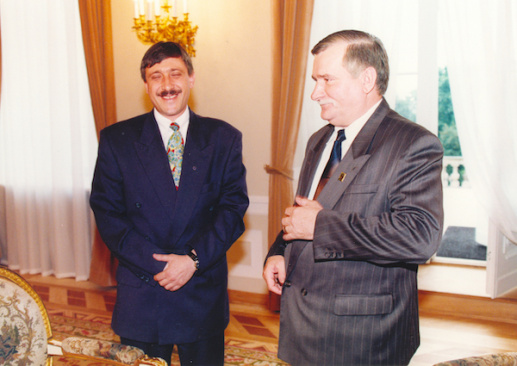 The "generals" had to come, and they really arrived...

“With or without me, the change would have come, but no one could say when”, in the words of Lech Walesa, the Nobel Peace Prize winner and the President who wrote the last page of the short history of communism.

In the late summer of 1980, an ordinary and unknown electrician with a moustache jumped over the fence of the Gdansk Shipyard, he calmed the angry protests and in just a few days created something unseen in the region - independent and free trade unions. Fifteen years later, I was standing in the lobby of the European Hotel in Warsaw, Poland, praying that the torrential almost tropical rain, quite untypical for Warsaw, would stop so that I could cross the street and shake hands with him without getting my new suit wet. The suit that was bought from a Turkish store on Vitoshka Street in Sofia solely for this purpose.

Over the years I had met Lech Walesa dozens of times, I knew well the dialect he spoke, and the phrases he "fired" which were becoming iconic on the very next day and all international agencies quoted him in their headlines... Nie chcem, ale musze, (I don't want to, but I must) was one of these famous quotes, as it really expressed the essence of the peaceful Polish transition from communism to a market economy. The transition that has filled the shops and employed millions in just a few days after decades of deep crisis.

However, the rain did not stop and so I entered very solemnly the newly opened presidential palace in the centre of Warsaw together with the doorman of the hotel, who opened a huge branded umbrella over me with the meaningful and symbolic inscription "European".

Lech Walesa is in a mood, he enters the hall, where I expect him quite energetically, shakes hands with a wide smile on his face and, as per command, takes the place which was prepared for the talk. Returning from the airport as he has just sent off the President of the United States Bill Clinton, after being with him in Warsaw for a few days, and he is obviously very proud of this achievement, as a US President comes to see what is happening in Eastern Europe for the first time. He sips from his glass of water and looks at me inquisitively in order to understand how I speak Polish this well, because I was speaking very familiarly to him, and when I ask him what he said to Clinton right on the steps of the plane, he utters a phrase that, just for a few seconds, travels around the world.

- Well, I told the President Clinton that the generals have to come to Poland. Only they will fix the country as well as guarantee us a successful way forward.

The hall is so quiet that even a mosquito will split the air. Walesa's team is numb, the pens of several journalists from international agencies, who with my consent occupied the chairs by the wall, because one-hour time slot was fixed only for me, freeze in the air... Only those who know the recent history of this remarkable country can understand the absurdity of this answer. In the late 1980s, in order to bring order, and perhaps to prevent Soviet troops from entering the country, the President of Poland at that time, General Wojciech Jaruzelski, declared martial law, and for the next decade it was known as the Rule of The Generals.

That is why this answer given by the country's first democratically elected President was in itself absurd… However, I continue to insist…
- Can you repeat? Did you really say “the generals..."?

Walesa smiles in a way that we in Bulgaria call "under a moustache", but it really suited him as his moustache is emblematic, and replies:
- You heard absolutely right. The generals will fix Poland and no one else could.

Just when I spread my arms almost helplessly, he adds:
- Here are some examples... General Electric, General Motors, General Dynamics... These generals are now waiting to invest in Poland, to teach us how to do business, to create a product that we can successfully develop.

The hall in the presidential palace is now resting, and with my peripheral vision I see how the correspondents from around the world are going down to broadcast the next hit phrase of Walesa, and when we are just the two of us, he tells me:
- For your information, with President Clinton we talked about Bulgaria... We are not going anywhere without you, neither to NATO, nor to the European Union. We are together everywhere, we can be amateurs in politics, me and your President Zhelev, but we certainly know how to lead our people to a better world… With me or without me, with Zhelev or without him, all this would have happened one day. Even we didn't know when.

And so, it happened. With many hopes, disappointments and naive expectations, with the huge benefits that freedom of speech and the free market have brought… And with the truly priceless lessons that the “generals" have given us.