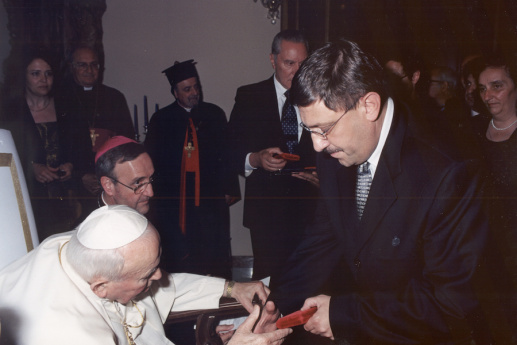 The leading PR expert and CEO of the communication agency M3 Communications Group, Inc., Mr. Maxim Behar shares his exciting acquaintances, interesting experiences and the lessons he learns in his author’s series Priceless Lessons, which he publishes for BGLOBAL magazine.


The smile of Pope John Paul II
The Holy Father became the first sovereign of the Vatican City to visit Bulgaria and had the first special website in the whole history for his visit.

I have no idea why so many of my occasional meetings and amazing ideas have been happening on Sundays, as is the case with this story too. Surprisingly, we went for a cup of coffee that afternoon with the press director of the Atlantic Club in Bulgaria at the time, later a longtime director of the Bulgarian News Agency (BTA), who passed away recently, and I saw in his eyes a special glow while sitting on the low chairs in the cafe of the Archaeological Museum in Sofia...

- To know, in great secrecy I'm sharing only to you, Solomon Passy called me just now and told me that Pope John Paul confirmed he was coming to Bulgaria… There is less than a month until his arrival... It is very important and quite urgent to come up with something genius...

While listening to him and waiting for my coffee, I had already opened my mobile phone and was registering a site for the Pope's visit to Bulgaria… My idea was very clear - it was a unique opportunity to promote Bulgaria around the world in the best possible way. There are nearly 1.4 billion people in the world who have identified themselves as Catholics and even if half of them were interested in this unique visit, this would be a remarkable chance for Bulgaria.

A week earlier, with Solomon Passy – the Minister of Foreign Affairs at the time and the main driver of the invitation to the Pope, we were clarifying the last details of the reception. We even knew exactly the moment when the Pope would stop to bless the legendary East German car of Passy - the Trabant, which became a symbol of the irreversible Euro- Atlantic future of another country in Eastern Europe – Bulgaria. It was impossible to give him a ride in it, he was already quite thin and moving with a walker, and it occurred to me to make a special television studio to constantly broadcast the stay of His Holiness. The prestigious Hilton hotel, at the time run by another great and irreplaceable friend, Armin Zerunyan, hospitably provided us with wonderful facilities, while colleagues from my company M3 Communications Group, Inc. armed with cameras, microphones, mobile devices set off with the Pope's motorcade around the country.

We were all so happy. Our servers could barely withstand the millions of visitors. Solomon Passy and Armin Zerunyan attended the opening of the studio, watched by at least 40 countries from all continents. Our operators were broadcasting every minute what was happening… and one day as I was editing my consecutive texts, my cell phone rang, and a kind voice told me that Pope John Paul II would be happy if I could take some time to talk to him the next day at two o'clock in the afternoon. It sounded so absurd and strange that at first, I thought it was a joke provoked by the big media noise around the studio. In fact, I was partly right - when I briefly asked what the reason is, the voice opposite said softly:
- His Holiness is extremely flattered by your personal attention to his visit. His team found out just last night that with 32 visits so far in the 24 years since he has been the Pope and nearly 650 audiences and visits by heads of state, someone has made a special website for his visit. Usually, either the relevant Ministries of Foreign Affairs or the Vatican Embassies do it on their local websites. The Pope would very much like to meet with you and award you with his special gold medal from his historic visit to Bulgaria.

So... the next day I went on August 11th Street in Sofia at the Vatican Embassy. It was really early in the afternoon and after waiting about an hour for His Holiness to rest, I went in, kissed his hand and it was my turn to surprise him - I started the conversation in Polish language and so it went for the rest of the visit. The Pope was very pleasantly surprised, he told how impressed he was by his reception in Orthodox Bulgaria, he had not yet visited the predominantly Catholic city of Rakovski – it was for the next day. He also told me how delighted he was regarding his meetings with King Simeon Saxe-Coburg-Gotha, who was Bulgarian Prime Minister at the time as well, and while his spokesperson, the famous Joaquin Navarro, insistently handed him the medal to give it to me, he asked quietly, but very quietly:
- We thank you very much for thinking of making a special site for my visit, no one has done it before. What made you to make this huge effort, please tell me.

I started a little worried:
- Your Holiness, your visit to Bulgaria is a unique chance for people around the world to understand what you have seen here - this is a wonderful country full of young, intelligent and ambitious people, with amazing nature, climate and environment. In addition - of course, more than a billion Catholics around the world - want to know every minute how you feel and what messages you send to them… Not to mention that there is no better media so far than the one on the Internet and it is in real time...

The Pope smiled thoughtfully, was silent for a few minutes, lifted himself towards Navarro, handed me the medal in a red box, and said to me:
- I pass it on to you completely deservedly and thank you for these words. More people around the world should hear them. I know that the future is there and we must all follow how these communications will develop.

I left happy. I will remember forever this kind and thoughtful smile... I guessed, but I still did not know. Less than a year and a half later, boys from Harvard University invented the product that Pope John Paul II was so curious to know.