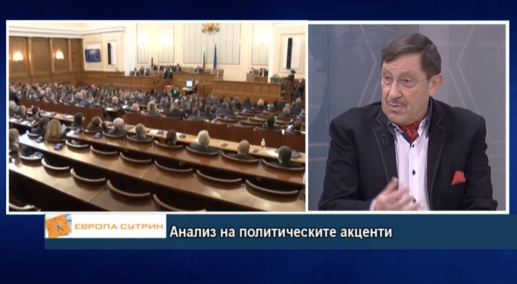 Maxim Behar was a guest on the Europe Morning show on Europe TV with host Diana Radeva and shared his opinion about the new Bulgarian Parliament, composed of business people, about the political forces and the role of the President. Whether the PR expert's predictions are optimistic you will read in the interview.

Host: Hello again. This is the Europe Morning show on TV Europe. I am Diana Radeva. The start of the new Bulgarian Parliament is already a fact. Yesterday we saw brand new MPs, most of them with an average age of about 40. This is shown by the statistics, the youngest or one of the youngest chairmen of the National Assembly in modern Bulgarian history, but whether in the whole history of Bulgaria, this will be discussed in the coming minutes with PR specialist Maxim Behar. Hello, welcome. And the lady in the studio, professor Antoaneta Hristova, a political psychologist. We talked about the fact that the new parliament looks quite different. What are your impressions?

Maxim Behar: I think that the main feature of the new parliament is not so much the average age as the fact that about 90% of the new people are people with a business background. These are people who have made no less responsible decisions every day than they will have to make now. That is, they have an exceptional experience, they have made their money, they know how to make money because a large part of the parliament, there are people in the parliament who do not have a single working day in their life and have always expected someone to give them a salary somewhere or to take some commission or something - to earn some income. Business people, in my opinion, should enter politics as soon as possible, as it is, but this policy, maybe in ten years, will change completely and this whole system, which no longer works and we have repeatedly talked about it in your studio, for some strange reason we still call democracy, one day it will undergo great changes anyway, because the whole world has changed - social networks, communications and everything else, the business has changed, the political system remains the same, it's completely absurd. But it is very important that there are people who have made business decisions and are very experienced in this regard, as far as the new Speaker of Parliament - 34 years is a very dignified age, by the way, for contemporary times. Has anyone asked Bill Gates how old he is? Has anyone asked Steve Jobs in his garage, when they made the first Apple computers with screwdrivers, had they asked him how old he is? Mark Zuckerberg, how old was he when he created Facebook as a student at Harvard. 34 years is an age at which the new Speaker of Parliament probably has ten years of work experience – absolutely, absolutely enough. You know Diana, I work with people, the average age in my company is 27 years. Many students, but these students, I do not want to offend anyone, are much better in practice than their teachers, and therefore I think it is a step forward.

Host: So, you are an optimist and for you, this is a step forward? That a lot of people come from business, not theorists, so to speak?

Maxim Behar: Well, I've always been optimistic. Practice is super important at the moment and is much more important than theory.

Host: I understand. And do you think, watching the consultations, some criticized that they were publicly broadcast, and now there are other agreements away from the cameras. Are you optimistic that a cabinet will be formed? We also listened yesterday to Kiril Petkov and Asen Vassilev, who said that agreements were being reached, that nothing was 100% certain until the final moment.
Mr. Behar are you optimistic about the formation of a new government?

Maxim Behar: This government will be normal, elected, and consisting of four political forces that have sat down and understood each other intelligently, properly. You mentioned that there were opponents of this transparent debate. I do not find a normal person who would be against this. Everything that is transparent is ethical. Everything that is transparent is accurate, honest, and fair. And I think that this government, as well as in Germany, by the way, the same can be said, that this government is under duress to wash their eyes, have some clear vision, someone to govern. Modern conditions and political relations put us for the first time in Bulgaria at such a table, where we can understand each other, we can have the same goals and these goals are called Bulgaria, which must be taken seriously and improved.

Host: Who holds, however, the key to creating a cabinet?

Maxim Behar: In these (parliamentary) talks, the positions of all political forces on the most important issues were heard. This has never happened in Bulgarian history. They were broadcast live, politicians were heard. Of course, the agreements for ministerial posts, for deputy ministers, who will be responsible for what, how the ministry will be structured - of course, they will not be public.

Host: In your opinion, can finding people who can do the job, as Kiril Petkov said, stumble upon a stone? And those who suspect that Cornelia Ninova is a very strong figure in this equation, are they right Mr. Behar?
Maxim Behar: I think they will find a good way to put the right people in the right positions because I have said many times, Bulgaria is full of young, intelligent, capable, well-motivated people who can do the job. They just need to be motivated and have a sparkle in their eyes. Now there are these conditions, they will find people, I hope they do not enter, of course, into political games, negotiations.

Host: Any comment on the names that revolved. For example, Boyko Rashkov as Interior Minister was named after Cornelia Ninova, again the resigned BSP leader.

Host: There are so many different goals, different values. Is there a danger that this government will find itself in a situation where different partners want different things and therefore nothing happens in the end?

Maxim Behar: Politicians should know that they face a huge challenge, and it will be very difficult in Bulgaria in a global crisis, Bulgaria in a pandemic, I would say a great deal of poverty, complete disappointment, and devaluation of authorities in Bulgaria, authorities in politics. Great disappointment. It will be very difficult to activate and motivate the Bulgarian people so that there is support, broad support for the government. We will see what happens, but it will be extremely difficult, and these young people need to know that.

Host: What will be the life of this government, first and foremost, the role of the president? What is signaled at the beginning of his second term? And why, by the way, was there a draft budget proposed by the caretaker government, which so far signals the new parties that will negotiate a cabinet? It turns out that they will review it, but it is not certain that they will implement it.

Maxim Behar: We all have questions. I agree that We Continue the Change is a function of the President and will work together with the President. I guess that's good news, and I guess it's useful at this point because there needs to be some broader consensus. I am absolutely convinced that there will be autonomy, that they will separate, they will have their own platform and program. Let's see how far they go. However, what I see so far is very positive, because finally, after so many years, I finally see smiling people in politics. We are seeing people, I’m talking about Kiril Petkov, Asen Vassilev, the people around them. People who speak normally, who have a subjunctive, a predicate, and a compliment. People who speak to you in such a way that you understand them and say to yourself, and this is evident in the elections, yes 30%, 30% - so much God has given. However, it is clear from the election results.
The We Continue the Change Program is a brilliant program. With many specific things, which, if they happen next year in Bulgaria, we will simply be much better than now. There are many ways to make things better in Bulgaria.

Host: They are preparing for a 4-year term. As we move towards the end, we have 2 minutes until the end. What is your forecast? Will good things happen, who are the strong figures in this cabinet, and with what perspective, in terms of duration?

Maxim Behar: We have a great chance. We must use it in the best possible way and really the people around We Continue the Change must know that it will be very difficult, very, very difficult and we must be ready for any battles because really the way we live is actually the most important thing that needs to change. People want change and they strongly think that the smiles we see now from young people in Parliament are not artificial. These are the smiles of people who want to change something in Bulgaria and will do it.

Host: Do you have any comments on the rapper Hristo Petrov and his interview? Was he rather ironic about the reporter's questions or not?

Maxim Behar: His whole campaign was ironic. All the videos he had were ironic. I can't comment on one or two or three things. During these 15 years, we have seen such statements, such nonsense, that what a rapper or another young person has said is a flower in comparison… We shall see, we have some interesting political months ahead of us…

Host: Thank you. We expect more news about the agreement tomorrow. And next week, towards the end, there will be a government, as are the requests at the moment, we will see.