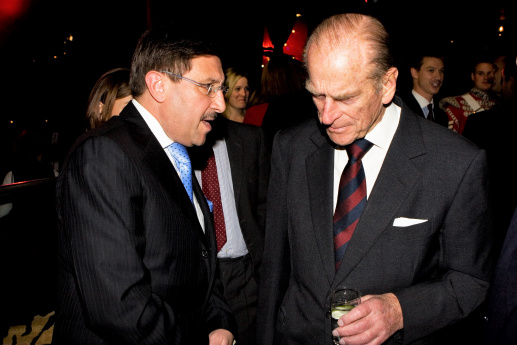 Priceless Lessons by Maxim Behar: A Story with Prince Philip

Maxim Behar talks about his meeting with Prince Philip, who is still revered after his death for his profound contribution to nearly 1,000 charities in Scotland, the UK and the world. It's a story with priceless memories that remain long in Behar's life and he now shares in his author series "Priceless Lessons" for BGLOBAL magazine.

Philip, who loved Bulgaria without ever visiting...
Queen Elizabeth's husband was a unique philanthropist, collector, a rare breed good monarch and a very, very literate man.

The emails I receive from my great British friend Alan Ogden to this day, for over 25 years, are usually just one sentence with no more than 10 words and signed succinctly with one letter - A.

However, one e-mail really took me a long time to decipher. "Max, HRM PP wants us to help him with GF, can we? -A ".
A complete mystery.

It was about midnight and knowing that I was two hours ahead of London time, I did not hesitate to call and patiently listen to the midnight transcript of the message.

And so, HRM turned out to be His Royal Majesty Prince Phillip, in short, the husband of Queen Elizabeth, who ran the Grenadiers Fund. Also referred to by his most popular title - the Duke of Edinburgh.

Alan, a dignified and proud Englishman, but also a former vice president of the Swiss bank UBS, has been my friend for centuries and one of the things he does is a variety of charity initiatives aimed at helping his island nation. Just like the Duke of Edinburgh, who had decided to start a campaign in the Grenadiers Foundation, set up in 1913, to assist British military veterans affected by various operations around the world, the most recent being Afghanistan.

Admittedly, the whole campaign and its goals were not very clear to me, but I have never refused to support anything that Allen does, so we created the first official and very professional website of the Foundation, through which even more proud Britons and supporters made donations to the fallen soldiers and their families.

Less than a month had passed, I had even forgotten this project, when the office assistant alerted me that Prince Philip of London wanted to talk to me... Just a few days before that he had sent me a long thank you letter with his photo and autograph, which still hangs on my office wall near the reception, and I was very certain that someone who had seen him was messing around with me... I took the call and in attempt to surprise whoever was on the other side I exclaimed cheerfully "Kalispera fille" (from Greek - Good afternoon, friend). There was about 30 seconds of silence, and then a deep baritone, which could only come from a prince or a king, answering me in Greek, which I didn't understand.

Then the voice on the other side continued in English:
- I did not know that you are Greek, they told me that you are Bulgarian, and I just wanted to thank you wholeheartedly and tell you that I love Bulgaria very much, not only because of what I’ve heard about it from my cousin Tsar Simeon, but also from the Bulgarians that I have met in my life... And unfortunately, I have never been there. That's why I called you. Thank you for your help. Oh, and don't forget, if you're free next Friday, I'm having dinner in London, and I want to invite you to join us...

I said that I am glad that we could be of help, that I wanted to congratulate him in his native tongue (he was born in Greece)... and of course I said I am free next Friday and would love to meet. We talked for about fifteen more minutes, he asked me about my business, about my relations with the Kingdom, about the reasons why I’m helping them free of charge. The site had helped them raise an unprecedented amount of donations, and he spoke enthusiastically about how new technology is helping people.
- Here in Buckingham, I have many opponents of these "new wonders" (so he called them), but with the Queen and Charles we are more convinced that we must go in this direction... I would be happy to work together.

I was waiting for the invitation by email and when I received it in an hour or two and read that "the Duke of Edinburgh is pleased to invite..." a light flashed in my head... Oh my God - I immediately went to Google and read that he is also the honorary president of the university in Edinburgh, where my daughter Ralitsa was studying at the time. So, the following Friday, she and I sat at a great dinner table just for the people involved in the Foundation, and of course, we were the only foreigners.

We spoke about Bulgaria, about the British, who would frequently purchase properties in the ski resort Bansko and by the Black Sea, about our fellow Bulgarians who work on the British islands and how hard working they are, and then I heard a familiar voice, coming from behind me, it was my acquaintance from the phone call...
- Ah, here is our Bulgarian friend, who helps us so much.

In an instant I jumped, and we started a cordial conversation, which was a continuation of the previous one. Prince Philip was sincerely glad that there were Bulgarian students at "his" university and suddenly interrupted the conversation to ask Ralitsa a question.
- Can you tell me which books you're reading now, at least two or three of them? Without doubt University lessons are very important, but remember that your most important lessons are found in books...

And then he turned to me with a smile and added...
- But this also applies to you, my dear sir... as I have already told you, I hope one day I can see Bulgaria, my son Charles told me about it, and I have read so many good books on your country that "remotely" I am in love with it.

And to all these unique characterizations of Prince Philip, which were written in the last year, when he left our world just two months before turning 100, all of them ubiquitously mention him as the most literate person...