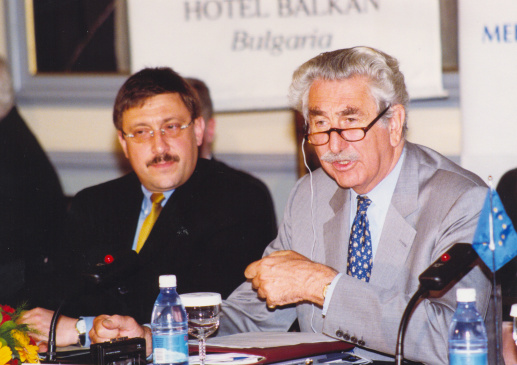 Maxim Behar writes about his meeting with Baron Daniel Janssen, Chairman of the Board of Directors of the Belgian industrial group Solvay, Chairman of the Council of the European Round Table and award winner for his great contribution to the development of bilateral relations between Bulgaria and Belgium. A meeting initiated by the Baron himself, which unfolds a new beginning for a strong friendship and an even stronger expansion of business cooperation with Bulgaria. It is a story with priceless memories that remain for a long time in Behar's life and now he shares in his author series "Priceless Lessons" for BGLOBAL magazine.

One of the first multimillion investments in Bulgaria showed the road, which we should follow, but quite often over the years there have been unexpected and unnecessary turns on this road.

There were no more than two or three of us in my company at the time, but - of course - the first person to be hired in any company at the time was the secretary. In many places today, this word is more than offensive, because the far more corporate "assistant" denounced this old-fashioned position. Anyway, I was returning from a trip to my small office in the center of Sofia, when the secretary told me, somehow even carelessly... "Well, Baron Janssen is looking for you, he requested you call him back."

In those years, someone looking for you from abroad was an event, never mind that someone being a whole baron… now that was something.

I dialed the phone, written on a small piece of paper, and on the other side a secretary or assistant, as you want to call her, picked up the phone. She told me that she will transfer the call to him immediately, but before she did, I asked the logical question:"Who is Baron Janssen?"

There was about a minute of silence, and then an answer, with a slightly indignant and questioning tone of light falsetto: "Mr. Behar, how is it possible that Baron Janssen knows who you are, and you do not know who he is..." I had no answer, it came to me later.

And so, it began.

The next day I was at the airport, from where we took the Baron's private plane to Varna (Bulgaria), and in an hour, we were almost incognito around the smoky soda fence of the soda ash plant that Baron Janssen’s world corporation Solvay wanted to buy. We had lunch in the very fashionable restaurant for its time in Grand Hotel Varna on Golden Sands and the Baron began straight away without any courtesies:
- Maxim, you were recommended to me by my friends as an honest and respectable person. And we, at Solvay, are like that. We are here not only to buy production, but also to change it completely, to bring - sorry for the expression - Europe in Bulgaria and vice versa. We will create a model so that other investors can follow our footsteps...

Indeed, the years were such that our country itself was divided - whether to sell to foreign companies or to try to do the impossible ourselves through the so-called mass privatization.

But even for the uneducated, it was clear that if it were possible for a radiator plant, for example, for a world chemical producer such as the Devnya plant, it would simply mean a slow but sure death. And when only two years later the baron and I toured the already completely renovated part of the factory, where they had invested nearly $200 million, my friend and head of the Bulgarian Chamber of Commerce, Bozhidar Danev, leaned slightly into my ear and whispered: "Max, just imagine if this was privatized by the workers, what a ruin it would be”... Bozhidar left this world too early, but he was one of the people who really understood economics and investments.

The Baron was so enthusiastic about Bulgaria that only months later he started inviting world renown businesspeople every other week and presenting our country to them in a light that even the most professional advertising experts could not achieve. At that time, he headed the European Round Table of Industrialists, often called the Ministry of Business of the European Union, and so here appeared world famous business names, which we had only read about in the Wall Street Journal and The Economist. They studied how to invest in Bulgaria and felt its increasing proximity to European markets.

His affection for Bulgaria was so strong that at the opening ceremony of the renovated plant he managed to persuade the then Belgian Prime Minister Jean-Luc Dean to be present and give a speech in freezing negative twenty degrees weather conditions and he got so ill that a day or two later during a live broadcast, a Belgian journalist asked Prime Minister Dean why he lost his voice, and the answer was:
- It was worth losing it, and I'm not sorry. I saw a wonderful and huge Belgian investment in a country that has a great future, and we will constantly lobby for it to become a member of the European Union as soon as possible.

And just like that Bulgaria was full of investors who admired our country and really fought hard for it to quickly return to the big European family. This happened, although it took us down a very winding and uncertain path.

Just then I was present at a debate among the Bulgarian management of the soda ash plant as to the right pronounciation of the Baron's name.

One of the directors quickly resolved the dispute:
- We will call him Janssen, even Yasen (meaning “clear” in Bulgarian), because it is clear to me - he is just an honest man and loves Bulgaria. This is enough.”

This is how people in Bulgaria sometimes refer to each other, not by their names, but by their actions. And Baron Daniel Janssen knows this very well.