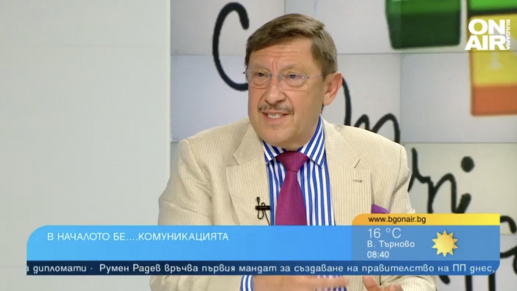 PR expert Maxim Behar took part in the morning program on Bulgaria ON AIR TV with hosts Maria Konstantinova and Miroslav Dimitrov. He expressed his opinion on the topics of Bulgaria's ambiguity about the situation in North Macedonia, the missing communication strategy in the Bulgarian Government and the expulsion of Russian diplomats.

Host: How will this situation with the expulsion of these 70 Russian diplomats affect the image of the prime minister?

Maxim: I don't think about the image of the prime minister as much as the image of Bulgaria in both directions. The fact that someone has made a communication mistake we have been hearing for 6,7,8 months and it is not news. It seems to me that from the very beginning the whole government had no communication strategy, no idea how to communicate, with whom to communicate, in what way. And we have seen, very sadly, because I sympathise with these young people. The people who wanted to change something, to turn the country in another direction, but they did it with a kind of consomol enthusiasm, without, in my opinion, a clear strategy to explain first within the coalition itself what and how they wanted to achieve. Secondly to those who elected them in Bulgaria and thirdly to the world. And for that, very unfortunately, I think today we are going to see quite big changes in the coalition talks and in probably how the mandate will be received by the President.

Maxim: First I want to go back to, maybe 3 minutes ago, in this conversation. It's not so important who's going to which TV station and which PR expert they're going to call, it's more important what they're going to say, of course, and how they're going to say it. And if, of course, in a sense, there was no organisation of communication by this government, I would say even parliament in the end, there was no organisation of the messages either, no people to, I'm sorry to say it, but people to speak meaningfully with a subjunctive, a predicate and a complement to explain what they wanted to say, how they wanted to do it. Nobody understood what was happening in Macedonia. I am not sure that there are people in the government, I am sorry if I am wrong, who have even read the so-called Macron Plan. Last night, this fresh case where suddenly the French Presidency says, 'We have a new proposal', and Macedonia says, 'We accept this proposal because it is better', and the Bulgarian Foreign Minister says, 'There is no such proposal', when our Parliament has voted and approved a proposal. So this is a complete chaos.

Host: Where does the connection break right there in that communication, why?

Maxim: I think nobody is talking to anybody because there is no strategy, there is no common vision. It is quite normal when there are 4 political parties, which in a sense have nothing in common with each other, standing in one room or at one table and want to come out and say something meaningful as a common position it is quite normal for them to coordinate with each other. There is a great chaos in the communication between them, but of course the communication outside Bulgaria is not irrelevant, because really my friends call me from Europe, especially France, Germany, Belgium, and say, "What is going on in your country? Complete chaos, you don't have a speaker of parliament, you don't have a government, you don't have a prime minister, everybody has resigned."

Host: What message is this expulsion of the 70 Russian diplomats from Bulgaria?

The expulsion of the so-called diplomats, they are less diplomats, not 70, but the expulsion of the Russian citizens, let me put it that way. This is, I think, a poorly communicated step, perhaps made in a moment of frustration or a moment of wanting to do something to make an impression. I mean, okay you want to expel whoever, there are diplomatic procedures, there is a way to do it, there is a way to communicate it.

Host: And was it supposed to happen that way?

Maxim: I think definitely not that way. Again, I think there are political decisions that have to be made especially in wartime especially in a situation like this.

Host: Should have really communicated with his coalition partners to at least know what was going on. Obviously it was a lot of question marks in just a day that got: when, why, should the justification have been clearer?

Maxim: Absolutely. I had a long meeting yesterday with the Minister of Bulgaria and the Deputy Prime Minister Asen Vasilev and I was super impressed with the way they put their ideas across. It was a meeting with the diplomatic corps and the business community, which I modelled and I had the opportunity just to be next to them and ask them questions. I mean, there are people who all of this is personally I'm sorry to say, I sympathize with Prime Minister Petkov, however, communication reflexes are very personal qualities.

Host: So far we have seen a lot of criticism and accusations from the opposition and in general criticism of the Prime Minister for acting in the same way as the former prime minister Boyko Borisov, is an authoritarian leader model winning in our country?

Maxim: In my opinion, a prime minister who runs a coalition government must be very dialogical, very clear, very precise and very strongly argued. Personally, I do not believe and have never believed in compromises, because a compromise is practically something that is not true. Whereas many things that were published in the last ten years in Bulgaria were practically true, but they were either filmed by some secret cameras or somehow reported by someone somewhere. Everything is based on communication in the modern world. Even on social media, for example, "We Continue the Change" (original translation in Bulgarian: „Продължаваме промяната“) did a very good election campaign on social media. It seems to me that this has brought them a lot of positives mainly among young people. The moment they started running the country everything stopped. Life stopped and for example the profiles of the party or the movement or whatever they are called on Facebook started to become some boring places of some governmental reports with some people glorifying and praising. This in a super outdated way because they already thought they were in power and could control everything.

Host: Why did they change like that, you say in the beginning they approached it well?

Maxim: Poor communications strategy if there was a strategy at all, lack of communications advice and they do mention some names, some people who work with them, however it's not , it's these hourly engagements that don't work. It is a country, it is a government, it has to be managed in terms of communication very professionally.

Host: The former prime minister Boyko Borisov points out a communication problem, if it had been announced in the right way we would have applauded them standing up in parliament.

Maxim: Nobody denies that Borisov is a very good communicator with all the remarks, with all the things we can say about him in all these 12 years, 15 maybe more, 20 since he entered the government. This was a lesson in how to talk and how to explain things in a meaningful way.