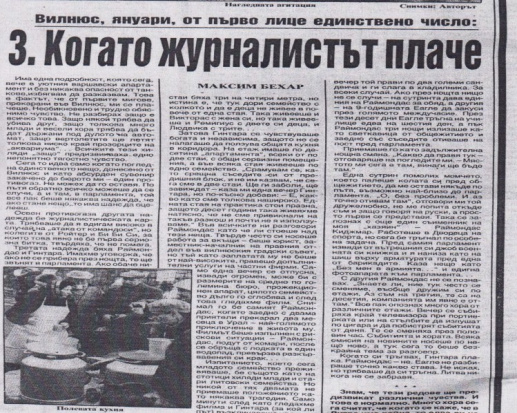 WHEN THE JOURNALIST CRIES

VILNIUS, February 18 - There is one detail that I now avoid in the cozy Warsaw apartment, without any danger from the tank. This is the fact that from the first moments I spent in Vilnius, I cried. An unusual and difficult feeling to explain. I didn't understand why all this was. Why does someone have to kill another, why so many young and cheerful people have to be held at gunpoint, why helicopters will fly so low by the windows of the "aquarium"… All these thousands of questions caused an incomprehensibly painful feeling.

Now it comes only when I look at the one thing I brought from Vilnius, an absurd souvenir that hangs above my desk - a gas mask. I couldn't leave it. On the way back anything could have happened, and there, in parliament, so this was hope- that if something were to happen, one had a chance to survive.

Apart from the gas mask, the other hope was the press card. I had to raise it high in the event of a commando attack, but my Reuters and BBC colleagues, for whom this was clearly not the first serious battle, said it did not help.

The third hope was Raimondas and Gintaras. We had a stipulation that if I did not return at night, they would call the parliament. However, if no one answers - they will look for the Red Cross. After all, they had to be the link between the unknown and Warsaw, where they had to connect only as a last resort.

In general, in the two rooms of the dormitory on Baltupe Street, everything happened without much talk. On the first night, Gintaras told me that they felt rich and independent. "We live in two rooms. No one here, in the whole dormitory, on all twelve floors enjoys so much space. A friend of ours has signed up to live here, but he actually lives in a basement. According to Soviet Law, however, no one has the right to live in a basement, but he enjoys it. And now both sides are happy.” Both rooms were three by four meters, but the truth is that here even a family, no matter how many children they have, does not live in more than one room. This is how Victoras lived with his wife, but this is also how Remigius lived with his two children, and Louis with his three children.

That's why Gintaras felt rich and independent because she didn't have to use the shared kitchen in the hallway. There were a dozen "apartments" upstairs, each with two rooms, with common service rooms, and one family lived in each room. "I am ashamed to meet my neighbors from the previous block, and I do not tell them that we are now in two rooms. It will hurt them, they will envy us" Gintaras told me one night, but later added, “Well, so what if we have so much space... One room is practically empty because we have lived so cramped for ten years that we are not used to such luxury and hardly use it”.

In all our conversations, Raimondas seemed to be beyond all these things. Too often he brought homework, he was a lawyer, Deputy Head of the Legal Department at Vilnius City Council, but since his salary was not the highest, he provided additional services for private companies. Only one night he relaxed, pulled out a huge, perhaps the size of a medium-sized desk, projector, the whole family assembled it for a long time, and then we watched a movie. The film was shot by Raimondas himself when he spent two months with two friends in the Ural Mountains, the greatest adventure of his life.

The film was filled with risky situations - Raimondas, swollen by mosquitoes, turned a boat in a waterfall, bandaged his bloody leg…The ordeal the young family was now going through was the same as that of hundreds of thousands of young and old Lithuanian families. But he saw the situation as a tragedy. Just minutes after watching the movie and Gintaras exclaiming scared at every scene, there was a knock on the door and the Russian neighbor shouted, "Tanks!" Raimondas and I jumped and really saw a column of tanks and armored personnel carriers leave the "Northern Town", the largest army unit in Vilnius, and set off for the center. We sat for about fifteen minutes on the balcony on the tenth floor - Lithuanians, Russians, Poles. The children spoke all three languages, the adults - Russian, probably so I can understand them.

Then Gintaras just said, "It's over," and by the time I found out what was going on, Raimondas had already put on his coat. He put a sandwich he had just made in his pocket, grabbed a pack of cigarettes, and shouted along the way, "Don't come, I'll call you tomorrow." When he returns from work, he makes two large sandwiches every night and puts them in the fridge. Just in case.

If nothing happens at night, in the morning he keeps one for lunch and gives the other to the 9-year-old Еаgle for breakfast during school break. During those ten days, she did not go to school until the sixth day, and Raimondas left the dormitory like lightning for three nights and went to work in front of the parliament with his neighbors. He accepted it as a mandatory night shift. "What can I do here?" He replied. "My place is there now; it will always be there."

One morning I asked a boy who was warming up his car in front of the dormitory to drop me off somewhere on the road, as close to parliament as possible. "Oh, no problem. I'm about to head there", he replied in a friendly manner, he didn't ask me where I was from and why I spoke Russian, but just introduced himself. That's how I met another namesake of my "host" - Raimondas Kidjmar. He had worked at the Palace of Sports, but now he was on a special mission. In front of the parliament itself, he took his military ID card from his inside pocket and strung it like a skewer on the armature in front of one of the barricades. He said something like "Without me in the army" and raised his camera towards the parliament.

I didn't know the other Raimondas. "You know, we change here often, we even hang out on each other’s floors. I'm on the third, they're on the tenth, their company is obviously from there.” After all, I met a lot of people from the different floors. In the evenings, they would gather around the TV at the concierge's or on the stairs to smoke a cigarette and discuss the day's events. They changed every half hour. Events and people. Each newscast had something new, and here it was an endless topic of conversation.

Gintaras cried as I left. Raimondas didn’t. Eagle didn't know exactly what was going on. I didn't want to, but I had to leave. Lithuania can never be forgotten.

I know that these lines will evoke different feelings. And this is normal. Many people now believe that when there is a war in Lithuania, it is almost anti-Soviet hysteria.

Yes, but there is indeed a war in Lithuania. People died in it. I do not hide that on the tenth day I wanted to escape from this nightmare. I was tired, sad, and confused.

I kept asking myself, "Why?" Because the answer is too difficult, I admit that I cried until the last moment. And when the Polish border guard at the checkpoint near Grodno raised the barrier and I was out of the war, I pulled to the side of the road and felt that I was really crying.

Today, no one believes in tears.

Moscow hasn’t for a long time…