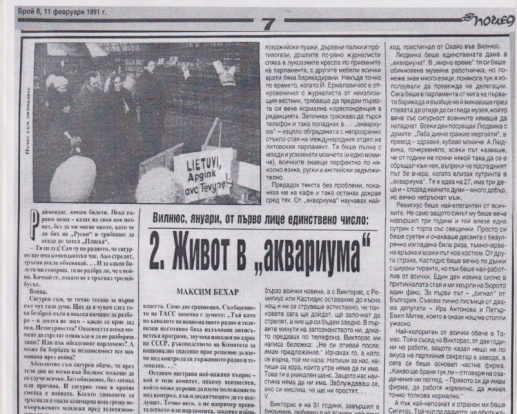 LIFE IN THE "AQUARIUM"

VILNIUS, February 11- “Raimondas, I don't have tickets. Let's go on foot," I told my new acquaintance, without blinking, as if I were on near the ‘Russian monument’ in Sofia and had to go to the Pliska Hotel, just 30 minutes away.

- You're crazy! You heard on the radio that there would probably be a curfew. If they shoot, then what would you explain… And what tickets are you talking about, didn't you hear this is war? Hop on before the bus leaves.

I'm sure that's when I first heard that word. I would hear it countless times after that, and I would never know — and I still don't know — what was behind it. Uncertainty? The danger of shots fired from somewhere at any moment and without any reason. But why? Or the besieged parliament? Or maybe the struggle for independence must come through war?

However, I am absolutely certain that anything could have happened to anyone in Vilnius during those times. No explanation, no logic or reason. And surely this is war after all. When the tanks set off on that nightmarish eve against the unarmed youths in front of the TV tower, the program went on as usual on the small screen. The presenter was Eagle Bučjalite, a rarely beautiful Lithuanian woman, who a week later was the first to start resuming broadcasts again, this time from the parliament building. The director on duty was Ausra Lukosiene, and this is how she described this scene at first, generally, then illegally printed issue of ‘Lietuvos Ritas’. "I happened to look out the window at Vingis Park and, my God, I couldn't believe my eyes, I saw tanks. Soon the first shots were fired in the very courtyard of the television station, and they started firing in the corridors. Then we barricaded the studio door, and Eagle continued to lead the program, telling the audience what was happening live. The people downstairs in the courtyard were surprisingly calm, just chanting "Le-tu-va" (Lithuania) without interruption. Then there was an automatic slam on the lock of our door, it swung open, and the paratrooper, who came in first, shouted loudly in Russian: "Comrades! Soviet power has come."

There are thousands of other eyewitnesses from that night. Their testimonies differ very little. However, the soldiers who fired and who could also testify are long gone. The very next day this part was sent to an unknown place, still no one knows who ordered to shoot, who even wanted to take power. Just two comparisons. The TASS report begins with the words: "As Anti-Soviet programs were constantly broadcasted on national radio and television channels, attacks on the USSR were heard, the leadership of the National Salvation Committee decided to take control of state radio and television…"

I leave aside the most important question - who is this committee, unknown to anyone, which can decide to take control of the situation, and whom the paratroopers obey? Exactly that committee, not for example the legitimately elected government or parliament! But I will tell you something else. Only 12 hours after the attack on the TV and Radio Tower, at 2:30 PM on January 14, two people stood facing each other in the building of the Central Committee of the Lithuanian Communist Party, supporting the CPSU platform. One is known to all - Juozas Jermalavičius, Chairman of the Corporate Commercial Bank in Lithuania and one of the secretaries of the Central Committee of this party. The other is almost unknown: the journalist from ‘Walstechu Lajkrastis’. Valdas Kviadaras, a reporter from a newspaper that was forbidden and therefore the conversation was published in part, four days later in Republika newspaper. Here is the most important of it.

Question: Can the National Salvation Committee take power into its own hands?

Answer: This will be done by force. The Committee is a revolutionary body that has nothing to do with reorganization.

During those ten days that I was in Vilnius, we waited for THIS to be done by force. And no one had the slightest doubt that it would happen. I was in parliament the next morning, and after a long, painful but understandable - and necessary - procedure, I was given a pass. Nobody cared about me anymore. The corridors were filled with young people with shotguns, wooden sticks and gas masks, journalists who had arrived earlier slept in luxurious armchairs in the parliament's receptions, and all the doors were barricaded with other furniture.

The corridors were filled with young people with shotguns, wooden sticks and gas masks, journalists who had arrived earlier slept in luxurious armchairs in the parliament's receptions, and all the doors were barricaded with other furniture. Somewhere just at the time when J. Jermalavičius had spoken to the journalist from the non-published newspaper, I had to hand over my first normal correspondence to the editorial office. I frantically started looking for a telephone and ended up in the "aquarium" - the room of the International Department of the Lithuanian Parliament, completely surrounded by opaque glass. It was full of young and smiling boys (and one girl), all fluent in several languages, Russian and English were mandatory.

I handed over the article without any problems, they invited me for coffee and so I stayed among them until the end. From the "aquarium" I learned of all the upcoming news, and Victoras, Remigius and Castidis stayed up late with me, and it seemed natural to us that the tanks would come now, start firing, and we would be together. In the first minutes of our acquaintance, while broadcasting on the phone, Victoras wrote me a note: "Don't leave later, I have an offer." I waited for him, and when he returned, he told me: "Write about us, write about people, which will not be present tomorrow. This is your unique chance. Because we really won't be here. You are mistaken if you think we will be forgiven…

Victoras, 31 years old, graduated in biochemistry, he is a favorite of everyone, especially the girls from the secretarial rooms surrounding us. Lydia is a young Lithuanian woman who lives in Germany with her boyfriend and works in the Red Cross, and when she found out that it was getting hot in her homeland, she managed to catch the first plane and arrive here. She slept in parliament, like everyone else. Just like Jeff, a 19-year-old American of Lithuanian descent who arrived in Vilnius from Ohio.

Ludwika was the only lady in the ‘aquarium’. In peacetime, she was an ordinary museum worker, but because she knew many languages, she was sometimes used to translate for delegations. She had been in parliament since the first barricade, and it never crossed her mind to go and see the museum, which the military would certainly no longer attack. Every day I would greet Ludwika with "Laba diena care mergaiti", in translation - hello, beautiful girl. And Ludwika, always blushing, claimed that for years she could not recall anyone referring to her in such manner, although the last time was yesterday, when I entered the "aquarium" in the morning. She is only 27, has three children and - according to her - a very good but always unshaven man.

Remigius was the most elegant of them all. Not only because his son was three years old, and he came in one morning with a candlelit cake. He was just vain, expecting a military landing with an immaculately ironed white shirt, a crimson tie, and a new suit each time. Castidis, on the other hand, was always in jeans with wide suspenders, but he was the most industrious of them all. One day he shouted loudly in the quiet room and threw a fax machine on my desk. For the first time a “signal” from Bulgaria. A letter addressed personally to me from two deputies - Ira Antonova and Petar-Emil Mitev, which warmed me terribly that night.

The most colorful of all, however, is Thomas. He is a neighbor of Viktoras, he has not worked for two years because he had said something not akin to the liking of the party secretary at the factory, and now he has set up a private company. "What am I going to defend here?" He responds to my puzzled look. "I have the right to have a company, to work normally, to live just as normally."

And the most unknown and strange to me was Sigitas. Hehad heard on the radio that they were surrounding the tower, got up from Kaunas and drove a hundred kilometers in his brother's car, arriving just as the shooting was in full swing. "Then I immediately went back, I had a thousand rubles hidden, I went to a hunter and asked him how much his rifle cost. Five hundred rubles. All right – I say, here's a thousand, just sell it to me.''

Sigitas is only 18 years old, he's terribly scared, he doesn't talk much, he thinks about his mother and father, but one night as we stood in the dark and watched through the window the hundreds of fires near the parliament, he folded a sheet of paper in two and composed a poem for me.

That's it. Although in those ten days in the "aquarium" I could write a book, everything, I think, has to be experienced. I often make this comparison - there, among the opaque glass, in the corridors, in the parliamentary restaurant, in front of the office of Vytautas Landsbergis, it was like we were all in… a restroom. Absolute equals.

"Didn't you hear this is war?" Raimondas Paksys had told me the first night.