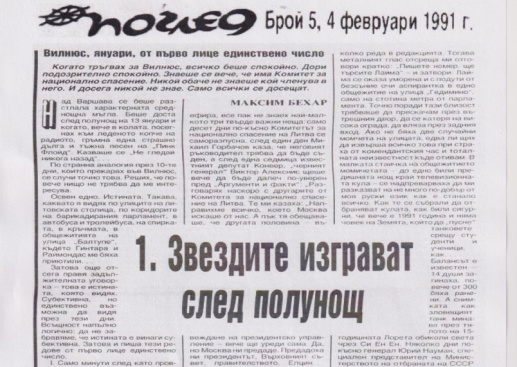 THE STARS RISE AFTER MIDNIGHT

VILNIUS, February 04- When I left for Vilnius, everything was calm. Even suspiciously calm. It was already known that there was a National Salvation Committee. However, no one knew who the members were. And to this day, no one knows. Only everyone guesses.

The characteristic midnight mist had spread over Warsaw. It was well past midnight on January 13, and when, already in the car, I reached for the ice button on the radio, a terribly long and sad song by Pink Floyd exploded. It said, "On the turning away"

By a strange analogy, this is exactly what happened during the 10 days I spent in Vilnius. I decided that nothing else should interest me.

Except for one thing. The truth. As I saw it on the streets of the Lithuanian capital, in the corridors of the barricaded parliament, in the bus and trolleybus, at the bus stop, in the pub, in the dormitories on Baltupe Street, where Gintaras and Raimondas had sheltered me…

That's why I'm making the obligatory reservation right now - this is the truth I saw. Subjective, but only possible to see these days. In fact, it makes perfect sense: let's not forget that truth is always subjective. That's why I write these paragraphs in the first person, singular.

Just minutes after Pink Floyd's lingering bass disappeared, radio station ‘Z’ suddenly fell silent. Somewhere behind the microphone, in the studio on ‘Novi Sviat’ street, there was a commotion, and a second later the host called in a trembling voice "We have just been informed by Vilnius that the army has taken over the city's radio and television center. There are many killed. Nobody knows how many they are. The National Rescue Committee announced that it was taking power…” Then, as a small absurdity to this whole message, such furious rock sounded that I almost stopped the car in surprise. Only then did I realize why all this confusion was. When I spoke to Marisza Wernikowska, the head of Radio Z’s information service, just a few days ago, she told me that only young girls stayed in the studio at night, changing CDs and announcing the time if they wanted. They just didn't know what to do that night when someone called them from Vilnius.

Unlike them, however, I knew what I had to do. I pressed the accelerator. I had no idea where I was going, who I would meet, whether I would survive at all. I knew a phone number - 613-655 and a single name – Rasa Maria.

The name of Rasa Maria (much later she turned out to be a charming 20-year-old Lithuanian woman, who even in these wartimes made the security guards turn to her at the buffet) was given to me by Lithuanian MP Cieslak Okincic. He happened to be in Warsaw and in the ten seconds he devoted to me, he managed to tell me this name and phone number.

That night, while listening to the confused voice of the girl on the air, I still did not know at least three very important things: only ten days later, the Lithuanian National Salvation Committee disbanded, and one day later Mikhail Gorbachev said that its leader should be tried, and in a week the famous MP Coner, the "black general" Victor Alexnis, would be far more confident in the face of "Arguments and Facts": "I spoke recently with comrades from the National Salvation Committee in Lithuania. They told me: "We did everything Moscow wanted from us. And we were promised that the other half - the introduction of presidential rule - would be settle by them, on their own. Yes, however Moscow betrayed us. We were handed over by the President, the Supreme Soviet, the Government, Yeltsin… Everyone. That is why a civil war is imminent. These words were said three days after I made the same predictions from a completely different position in my last correspondence for ‘Duma’ from the Lithuanian capital. Now the fact that Alexnis also foresees it strengthens my conviction - it will not come true.

I arrived in Vilnius at a time when, according to Polish Radio, there was to be a curfew and the army was authorized to shoot "meat". Later, all this turned out to be hyperbole. Due to the common border, common problems, and fears of the unknown, the Polish media dramatized a little extra. But no one knew if all this would really turn into endless drama. And still, no one knows.

I did not have more than 30 rubles in my pocket. All else was confiscated at the border. The applications, the documents confirming that I possessed them legally did not help. I was not shocked so much by the helplessness and humiliation, but rather by the way they were instilled in me. Every country in Europe set as a condition to show that you have something to live on; in the Soviet Union it was just the opposite. The young customs officer reassured me with the words: "What are you worried about now, you have 10 dollars, on the black market in Vilnius it is 300 rubles. You will be fine… ‘‘

That night, Vilnius was gloomy, cold, snowy and unfamiliar to me.

In the first parking lot, I call Rasa-Maria, a cold voice tells me she's gone. "You can't come to us now, the parliament is completely surrounded, call tomorrow or maybe another day."

I insisted, I promised, I begged - I had to hand over my first few lines to the editor. Then the metallic voice across from me answered briefly, "Write a number, you'll be looking for Lima," and hung up. Lima turned out to be tired and with insomnia as a graduate student in a dormitory on Gediminas Avenue, just a hundred meters from the parliament. It was because of this proximity that I had to jump through the courtyard, climb a high fence, enter through the back entrance.

If it weren't for two random boys on the street, I would hardly have done all this in fear of the curfew and the total uncertainty of where I was going. In the small room of the dormitory, the girls — they had been to the TV tower the night before — competed to tell me, in broken Russian, not much better than mine, how it all happened. How they came together to defend the tower, how they were sure it was 1991 and there was no one on Earth who would dare "launch" tanks against students and pupils – how would they…

The aftermath is well known - 14 people died and more than 300 were injured. And the photo of the sinister tank passing through the body of 15-year-old Loretta spread across the world through CNN. A few days later, General Yuri Naumann, Special Representative of the USSR Ministry of Defense in Lithuania during those days, would have given a press conference of his version of events, which I would not have believed to have been said if I had not been in the hall of the Vilnius House of Representatives: "I have information that a girl was lying under the stopped tank, they photographed her and then this photo is used to make disgusting propaganda…” He added: "None of our soldiers fired for the simple reason that they had no weapons near the tower..."

Anyway. In those days in Lithuania the mess was total. However, from the dormitory I easily contacted my colleague in Moscow, from where he has already handed over the modest thirty lines to Sofia. I took a break and only then realized - 20 meters from "Gedimino" passed tanks and armored personnel carriers, the girls were nine, and the beds in the room - two, still no one knew if there was a curfew or it's just a rumor. It was just before midnight, there were no stars in the sky.

Not one. The young boy next to me asked me something in Lithuanian, I replied with a shrug and because he saw my big travel bag, he asked in Russian: "If you have nowhere to sleep, come with me, I thought of calling the radio to share my address, but now there is no point…'' So that’s how we met with Raimondas Paksys, in his late 30s, deputy head of the legal department at Vilnius City Council. "It's terribly dark," I told him. "Oh, look what, in Vilnius the stars rise after midnight. Last night they fired just then - in the light. I was there, we all had to see…”