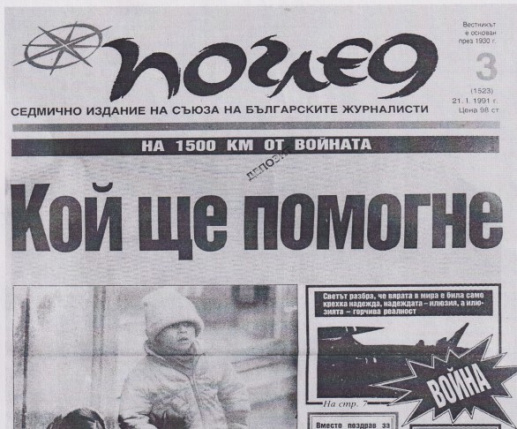 VILNIUS, January 21- By the time you read these lines on a Monday - probably - cold January morning, it might all be over here. Or maybe it is just beginning. Who knows? Either way, it is hard to predict with any accuracy the unfolding of these definitely dramatic and difficult days for Lithuania. So far 14 people have died, 358 have been injured, 57 are missing. The Parliament is surrounded by huge panel blocks and reinforcement, the streets leading to it are blocked by lorries. My God. Europe - 1991! And why all of this?

The reason seems to be one - Gorbachev's nerves did not last. It seems to me that for a moment he "slept through" a particularly important move and the first victim was Lithuania. It is logical: on the road from democracy to independence - and all the Baltic republics are undoubtedly now on that road - Lithuania had picked up the greatest acceleration and should have been taught a good lesson. Little Lithuania, which could hardly resist...

BUT LET'S NOT RUSH INTO PREDICTIONS

Moreover, I can't really do them now - I'm hiding with a notepad and radio in my hands in the third-floor corridor of the Parliament, grateful to those burly, high-cropped blond boys who carried sandbags all night. They're a lot more comfortable to sit on, and you still have a chance of surviving. The desks are in the rooms, but there the windows are full length and almost to the ground, and not only the risk but above all the fear is a little greater in them. So, nobody now knows whether really little Lithuania can resist. In the first five days, there were tens of thousands of people around the building, and during my infrequent trips out - it was a matter of honour for any journalist to be inside in the event of an attack - I saw the same people in the morning, in the evening and at night. With big national flags or with the photographs of their missing children. They walked around tirelessly, occasionally taking a break for a free cup of tea, then they were off again... Absolutely like at war.

The feeling also came from the fact that the concept of money was practically forgotten in those days. When I arrived in Vilnius on the first night - a curfew had already been introduced - some Lithuanians forced me into their house so that I wouldn't risk going back to the hotel. To this day they don't want to hear a word about payment. Whoever could find something to eat carried it to the parliament building, large, seemingly bottomless boxes of cigarettes, apples, sandwiches, mineral water still stand at the very entrance. In the restaurants and diners nobody pays attention to how much money you leave and whether you leave any at all... At the same time, to everyone's amazement, the phones worked perfectly and, in most cases, it was much easier to contact Sofia from Vilnius than in our capital with Mladost from Lyulin. The suffering and the fear that they might lose.

THE LITTLE FREEDOM THEY HAD

has united the Lithuanians immensely and, which is an undeniable truth, has carved out an extremely wide gulf between them and the small Moscow Communist Party here. On the night of January 12/13, tanks surrounded the radio-television centre in Vilnius and without much ceremony left 14 corpses on the ground. For Lithuania, this black cross and deep mourning, this bloodshed was absolutely meaningless. For others, however, who were determined to overthrow the legitimately elected parliament, this was exactly what was extremely important. But it was important that the Lithuanians kept their composure. I have never seen a more radiant, peaceful and united people. On one of the interminably long nights in front of the parliament, I asked an unusually beautiful young girl why she was standing there: 'Of course I am defenceless,' she smiled, 'but tell me, which one of us can defend themselves from the tanks. But we have to be here. We are here to witness, to see how they will attack and to tell our children if we survive..."

Indeed, it seems that in Lithuania the military underestimated a purely psychological feature - THIS PEOPLE HAD ELECTED A PARLIAMENT and insisted that it really should rule it: good or bad. In the end, during those days, nobody gave anybody an explanation as to what the military was doing in Vilnius, who sent them, why they were occupying the buildings, why they were shooting and killing. However, the accusations that the military, and more precisely the representative of the Ministry of National Defence, Gen. Naumov, made against the Prime Minister of Gediminas Vagnorius' country, were threefold and reminiscent of the ominous mood of the 1950s: destroying the ideals of socialism, insulting the working class and not respecting the Union's orders. These were the charges. If anyone has not been clear by now what these days in Lithuania are all about, I hope it has become clear to them.

This is it. I'd give a month of my life for just one day of Vilnius. I don't want anyone to fight for their freedom like that, but if it comes to it - let's hope it does like the Lithuanians did. In the small room of the building where we keep our coats and bags together with a few Lithuanians with heavy carbines and where the telephones are, I hung a big poster yesterday. I bought it from the bookshop across the street on Gediminas Avenue, and it says: 'Lithuania, the world is with you'. I crossed out "the world" and wrote "Bulgaria". I wish it was so.