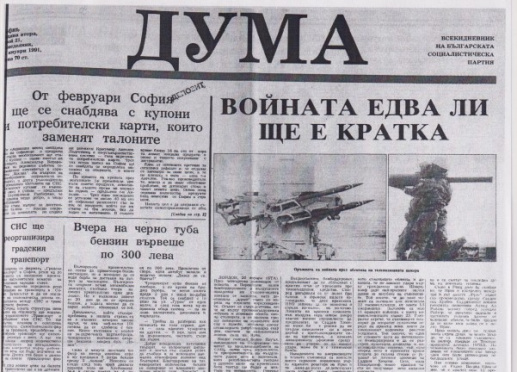 THE SHOCK IN LITHUANIA IS OVER, THE TENSION REMAINS

VILNIUS, January 21- The night in the Lithuanian capital was tense again. All roads to it - according to the parliamentary spokesman Audrius Ažubalis were blocked by paratroopers. Several incidents occurred after midnight, two of them involving weapons. In a dispute between a driver and random civilian hitchhikers, one of them pulled out a gun and emptied its magazine on the vehicle. The paratroopers noticed this "maneuver", started firing in the air, detained all the young men, who were later released. While in another incident, three Lithuanian policemen were detained all night after a car with an armed military officer with a machine gun chased them down due to speeding and arrested them. These cases prove that peace in Lithuania is hanging by a thread.

Late last night here in the parliament building, soldiers from the Lithuanian Army, the Republic Security Service, solemnly took the oath of office to their Director General, Audrius Butkevičius.Two days ago, parliament passed a law establishing the Security Service and allowing its members to carry weapons.

However, in a statement issued by TASS, the Lithuanian National Salvation Committee strongly protested the law passed by parliament. Its as-of-yet-unnamed members believe the law aims to "legalize the activities of nationalist armed groups". According to the declaration, "the law is directed against the interests of the people of Lithuania, it leads to fratricidal killings in the republic." Last night, General Valentin Varennikov, Commander of the Land Forces and Deputy Minister of Defense of the USSR, spoke on this matter.

He warned from the Lithuanian television studio: "The situation in Lithuania has calmed down, but the danger of new escalations is not ruled out." Varennikov later reiterated that if the republic's leadership does not withdraw from its "dangerous path […] the Lithuanian people should expect even more severe consequences." These are hardly words spoken in the wind. But the first effect of them was that last night several thousand people, despite the thick snow, were on duty patrol surrounding the parliament in Vilnius.

Today Ažubalis also read the official refutation of yesterday's words spoken on Soviet television by the Vice President of the USSR Gennady Yanayev, according to which in Lithuania the people are divided in two and the parliament pursues a discriminatory policy.

"Right now," said the spokesman, "we present to each journalist the full set of laws passed by the current parliament, and if anyone finds in them even a hint of discrimination, even a word, I am ready to apologize to Mr. Yanaev, whom I now publicly condemn as a liar. '' It was almost a sensation to report that one of President Gorbachev's closest advisers, Nikolai Petrakov, and 29 others had signed a letter protesting military intervention in Lithuania.

Petrakov has resigned, and Moscow has said seven other close associates of Gorbachev have also done so, including one of the authors of the reorganization, Alexander Yakovlev, and the famous reformist economist Stanislav Shatalin. However, in response to a question, the speaker of parliament said: "It is unlikely that this will change anything. As in any totalitarian system, everything goes through the hands of a select few, the others are performers".

However, President Vytautas Landsbergis told a late news conference last night, along with Icelandic Foreign Minister Jon Hannibalsson, that "there is only one point that needs to be resolved, and then negotiations can begin - all buildings occupied by military personnel to be returned to the Lithuanian government''.

The Democratic Labor Party, which was in power until last spring, also broke its silence, but after losing the election, split from the local Communist Party, and embarked on its own reform path. A statement from its presidium said that whoever was to blame for the tragedy in Lithuania would be forever despised by its people. The leaders of the National Salvation Committee are called upon to finally come out and face their people.

Among a series of laws, the Supreme Court passed a resolution condemning disinformation and the one-sided coverage of events in Lithuania in Soviet newspapers, on radio and especially on television. Another decree declared the activities of the National Salvation Committee illegal and the actions of Soviet troops in Lithuania aggressive. According to another passed law, additional social assistance is provided to the families of the 14 killed and more than 300 injured victims.

The shock in Lithuania is gradually passing. But anything can still happen in the Baltics.

Now they are convinced that the outcome will not come from parliamentary decrees, but ultimately from Moscow. That is why the tension remains.