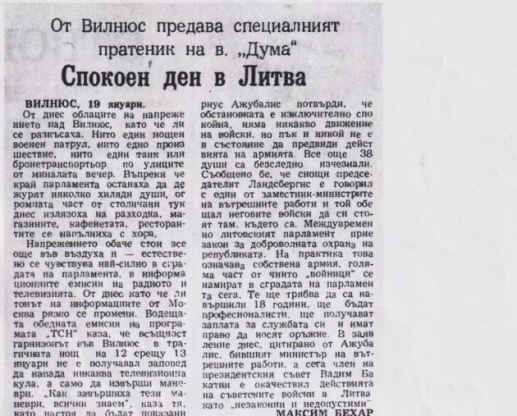 VILNIUS, January 19- As of today, the clouds of tension in Vilnius seem to have been cleared. Not a single night military patrol, disorders, nor a tank or armored personnel carrier on the streets was seen last night. Although several thousand people remained on duty, guarding near the Parliament, a large part of the citizens went for a walk today, the shops, the cafes and the restaurants were filled with people.

However, the tension still can be felt in the air – especially in the Parliament and radio and TV broadcasts. As of today, the tone of the information from Moscow seems to have changed dramatically. The host of the midday news of the program TCH said that in fact the garrison in Vilnius on the tragic night of 12 to 13 January was not ordered to attack any TV tower, but only to perform maneuvers. "We all know how these maneuvers ended," she said, insisting that footage taken during the attack be shown. As it is known, then the military seized eight video cameras, and two journalists, one of whom was a Norwegian, were injured.

Former Prime Minister Kazimira Prunskiene showed reluctance to leave the political scene at a press conference here. "It is a pity that my government has been given a no-confidence vote," she said. "It was a strong team of good professionals and I think we will be back." Prunskiene predicted that the Lithuanian crisis would be resolved in two or three days, as she said the National Salvation Committee had failed to build structures and attract followers.

At a press conference later, parliamentary speaker Audronius Ažubalis confirmed that the situation was calm, there was no movement of troops, but no one was able to predict the actions of the army. Another 38 people are still missing. It was reported that last night Lindsberg spoke with one of the Deputy Ministers of Interior and he promised his troops to stay where they are. Meanwhile, the Lithuanian parliament has passed a law on the voluntary protection of the republic. In practice, this means creation of its own army, many of whose "soldiers" are now in the parliament building. They must be at least 18 years old, trained professionals, receive a salary for their service and will be entitled to bear arms. In a statement today, quoted by Ažubalis, Former Interior Minister and now member of the Presidential Council Vadim Bakatin described the actions of Soviet troops in Lithuania as "illegal and inadmissible"