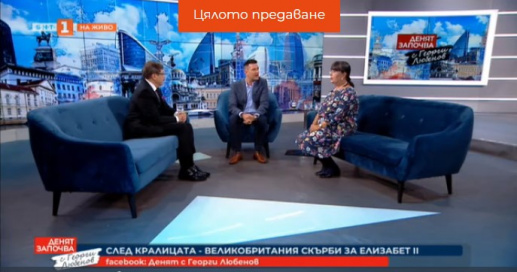 The PR expert Maxim Behar took part in the morning block of the Bulgarian National Television with host Georgi Lyubenov. The journalist and diplomat Maxim Behar shared his observations of the ceremony, as well as his expectations for the future of the monarchy. Behar talked about his personal encounters with the current king and talked more about his personality.

Host: A historical, world-famous person has passed away - Elizabeth II. Words about the Queen from our guests Mariana Hill and Maxim Behar, PR expert and communicator. Mr. Behar, you have released your personal photos with Prince Charles.

Maxim: They are part of the several meetings I had with him, and we talked a lot about Bulgaria. It fills the heart as there has been much speculation as to who will take the crown all these years. This is a person who has come to Bulgaria twice, also he is very close with our King and knows Bulgaria relatively well. I have met him at Buckingham Palace, in St. James's, where he will officially ascend the throne today.

Host: This event today is very important, very significant. The television broadcasts it for the first time. Can it be said that it is more important than the coronation itself, which will be next year?

Maxim: These are more symbolic appearances, because really yesterday the appearance in Buckingham and then the message he sent his subjects were very powerful moments. I know that a whole army of colleagues work for him, I even know some of them. It was done really, really well – really British. Very classy, every single element was touched, which means that everyone takes this increasingly ceremonial position very seriously. We all know the power of the British Empire and the power of the British Crown and of course the final word of the Queen, now the King. We realize now that monarchies more or less go away and fade or change. Perhaps the last to go will be the British Monarchy. But at the end of the day, it has to change, and it is changing, and I think the presence of King Charles will do a lot for that change to happen a little more smoothly.

Host: What do you think of the speculations that in one-two-three years he may give up the crown to his successors?

Maxim: Looking at his mother and father, it is assumed that he could reign for good 20-25 years and be at the head of the monarchy and the empire. I do not believe that under these circumstances, much less in the mess the world is in, King Charles will lightly give up the throne to his heir, unless something requires it. Let me tell you about him. He is a good man. All the conversations we had... do you know how he arrived in Bulgaria the second time? The King called me and said, "I'm going to London, if you want, come with me to see my cousin, the prince." I was the chairman of the Business Leaders Forum then, I'm still on the board. I'm a very active supporter of this idea of ​​having an ethical business society and helping each other in need. We sat down with a Scottish friend of mine and wrote the first business ethics standard in Bulgaria. It was a Sunday. I left for London on Monday. On Tuesday, there was a meeting at the Bulgarian Embassy where Prince Charles was supposed to be, but he didn't show up, which was a surprise for the Tsar as well. His European Director Susan Simpson appeared. I, in order to get out of the situation on the stage, have prepared two standards of business ethics and I gave the first one to the Tsar. During the years when he was prime minister, this standard stood behind him in the cabinet. And I handed it to him, and I said, "Now, this one's for His Royal Highness," and Susan Simpson appears. I, slightly disappointed, handed over the standard and said, "Give it to Prince Charles and tell him that if he doesn't come to Bulgaria next year, to give it back to me”. Just to get out of this situation. Three days later I received an invitation to lunch with Him at St. James's Palace. It was right on my birthday - an absolute coincidence. I went, we had lunch with Him, we talked, I gave him the standard, he apologized for not being present and told me "I am very seriously considering coming to Bulgaria for a second time". By the way, the only country where he arrived twice within 5 years. I will never forget how the then British ambassador, Ian Suter, called me to have coffee at the embassy and we went out into the garden “so no one hears anything”. We went out and he exclaimed “He's coming”, I asked him who was this about. The ambassador replied “Who!? You invited him and he comes for a second time." And so, he appeared in Bulgaria. By the way, I'm opening a big bracket - with a very large group of businessmen, maybe 50-60 people. After 2-3 months a British company came to me, which was a big investor, and I asked them "Why Bulgaria?". They said to me, “Don't you remember? We were with Prince Charles and showed great interest. By the way, you know about the great interest of British people in buying property in Bulgaria. They go to the villages, to the sea, to Bansko, wherever. This was prompted by Prince Charles' 2003 visit.

Host: Mr. Behar, you are talking about the PR side of things. Hasn't the Queen been PR-ing for herself all these years, or has it always mattered who stands where and what they do?

Maxim: That's because she carried it inside her. After all, there might be 1 million consultants around her to advise her, but she shows up, she smiles. I think that in this sense there would not be much opposition to Charles as king for two very important reasons. First, this position is very important to the British, who have lived under the King or Queen for centuries. There may be some emotions towards Charles as king, but hardly anyone will remember all these incidents with Diana, with Camilla. One day he forgot his microphone on and addressed the journalists so rudely. All these things, I think, will be forgotten. He is a good person. It seems to me that he has seen a lot and knows a lot.

Host: Mr. Behar, what are the expectations, what's going on, are we going to ask where William is, where Harry is, why Meghan disappeared. Now, in this mourning atmosphere in Great Britain, Meghan is not there.

Maxim: Everyone makes their own choice. Indeed, the royal family is under a lot of scrutiny right now – the media, the public, all the people who care, social media, which has turned the world upside down. In social networks, 4 billion people can write whatever they want. If you go on Twitter, you'll see about 10,000 fake accounts, one selling sneakers, one selling beach hats. And now another 1 million fake profiles will appear, in which who knows what can come out. So, we live in a different world, we live in another world. And Charles and his family will have to maneuver very well because the British press is ruthless. There is nothing like it in Europe. Here, all that we see is sugar candy compared to what the British press does on the basis of tradition and a very great fondness for scandal. You know "Good news is no news". This applies with great force to the press. It seems to me, however, that with his great experience, King Charles will do very well in this situation, and when he has to be silent, he will be silent, and when he has to say something, he will say as last night. Everyone watched – it was brilliant, it was perfect. Every word, every gesture. I watched 4-5 times and looked him in the eyes. His eyes speak. You started with the question of whether he would bring unification to the British Empire, I think that unification in Bulgaria is far more important. I really wish there was a person, people, group in Bulgaria who would succeed in uniting all of us.