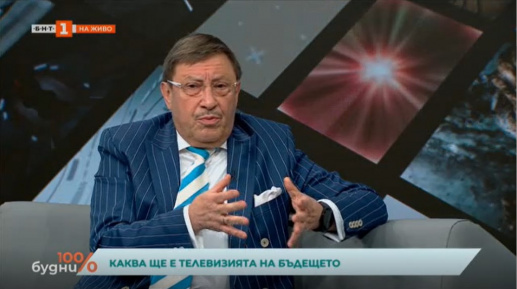 Maxim Behar: What will be the television of the future

Maxim Behar, PR expert, journalist, and diplomat, took part in the Bulgarian National Television's "100% awake" show, where he expressed his opinion on the future development of television as a media.

Host: Television has a long history behind it. The shift from black and white to colored, the replacement of huge receivers with the flat screen, satellite broadcasting with thousands of TV channels. But so far, the players in traditional TV have always kept the balance, and everyone has somehow managed to keep up.

Host: In time, yes. However, the unstoppable growth of the online video market is tipping the historical balance between TV channels and content creators, who are forced to adapt to changing cultural practices and new modes of distribution. For more on these issues, we'll talk with Maxim Behar and Simeon Ivanov.

Host: Maxim Behar is a leading global PR expert, diplomat, businessman and visionary with extensive experience and a strong presence in many countries around the world.

Host: As we saw, the poll was quite colorful. We were expecting the result to be dominated by the internet space, by social networks and everything that is developing there, but there seemed to be some balance.

Maxim: It depends on the concept of television. Is it the screen that stands on the wall or stands opposite of you or is it the institution of television. The institution of television has two elements - one is technological, the other is content. The technological cannot be stopped because you see what is happening globally. The content element is already up to us. You have to make sure that television has better and more relevant content for people who want to learn something interesting. And personally, I am very far from these claims that television educates, that television should teach us, show us who Ivan Vazov is, tell us about Hristo Botev. In my opinion, in the coming years, those TV channels or institutions that manage to become interactive so that they can involve their viewers - what happens on social networks, they will succeed. The ones that remain static and one-way, they will go away because, for example, is NETFLIX a television? It is, but it is not an institution. So, the only way for a TV station to change, and it will happen very soon, is for it to really involve its viewers in what it does.

Host: What does it mean for television to involve its viewers? According to your understanding?

Maxim: What wesee on social media cannot be shown on a screen. Of course, radio stations have direct lives all the time to be able to engage their listeners. In the same way, television should have direct inclusions as well.

Host: I mean, let's go back. Once upon a time there were these phone-ins, now there may be another option, that involved live viewers in broadcasts. Do you think that should come back?

Maxim: The interactive element, in my opinion, is absolutely mandatory and essential in any media. Why are newspapers going away? They don't go away because they have bad journalism, but because they don't have ads. Advertisers prefer to advertise online because advertising there is cheaper and more targeted, and most importantly - measurable. Television is also measurable, but all these agencies - they can be somehow modified. A click to a social media site could not be rigged, could not be manipulated. It's clear who's watching it, it's clear how many are watching it. So, TV channels will have the huge motivation to produce content that is so interesting that there will be advertisers for that content. Yes, we know we're in public television and we have funding. However, that funding cannot be infinite, in America public television does not exist, there is no such concept.

Host: In the poll, what outlines potential viewers is that they actually watch news. Very direct information that they can get. There they have this so-called trust for something that's verified as information.

Maxim: No doubt, we do expect a TV channel to have verified news, no fake news or if there is fake news, it should be corrected immediately. This is unconditional. However, far more important is speed in the first place. A TV channel cannot report a news story as fast as Twitter or any other social media. Second are the different opinions. Usually, we log into a streaming platform or a social media site to read other opinions. And third, ultimately, interactivity. Viewers are taught their opinion means something. I've said many times that Bulgaria is the only country I've seen where people talk to their TVs. If we have this phenomenon, we need to make it real so that the housewife in question can go to her keyboard and say whatever she has to say. Of course, this is a process and if it had been invented somewhere in America or in more advanced countries, we would have taken it from there already.

Host: I had read a study some time ago that television as a phenomenon would disappear completely. I have to tell you, he and I have talked about this topic many times with teenagers. Even the ones that have come here to us, they don't know who they're coming to. They don't know us, they don't watch television.

Maxim: Yes, but that's okay. If they need to watch the news or watch your wonderful show or morning block, they will. The issue is the content part. And that's entirely up to you. If you're making interesting content that's really catchy, that's appealing, that even young people will watch, then they'll know about that show. Of course, many TV channels are flocking to cheap shows that also have their viewers. Cheap as a level of content. Maybe in their effort to make more money they are making a living out of television. However, can we imagine a serious newspaper like the Wallstreet Journal for example, going down to the level of the News of the World just so it can sell more. It would lose its regular readers, and gain no new ones, because it's not typical content for them. The same is true for television. However, if we take a note of interactivity and bring in more viewer participation, then they will be interested in watching this show. Why do people stay on social media? Because their opinion can be heard too. First is the speed of information, second is the large palette of different opinions they can see, and third, their opinion can be heard too.

Host: Now I want to bring in the thesis of linear television, which has its own programme. And here comes SMART TV, which says, "You'll watch Simeon Ivanov and Christina Hristova another time, whenever you choose."

Maxim: It's a question of programme. To a large extent, the linearity is gone now, because if you miss a show, you can go back and watch it 2-3 hours later. It's not a significant change in modern television. That's why I've emphasized real-time interactivity and audience measurement capabilities the most. These are important things because television lives off advertisers. You all need salaries and equipment and investment. That money can't come from the state indefinitely because I don't think it's even the state's job to deal with media. It's all to be commercialized. In order for it to exist and grow, there has to be some measurability, which social media has. Maybe some hybrid between social media and TV. And at the same time, viewer participation. You mentioned how television came about. Yes, there was black and white TV, then TV became colored, then screens became flat. But all of that emphasized static television, one-way television. Whereas the biggest advantage of social media is that it empowers some 4 billion people to have a voice. They are the media. And they would like to be media on the TV channels in the same way. And this hybridity will happen very soon - 5 to 10 years. Television will not disappear, it will change. We won't have wires, everything will go wireless. Maybe there will be no TV screens at all. We will be able to watch anything wherever we want. We can have screens, but they won't be called TVs.

Host: Thank you very much! I suggest we end our discussion here.

Maxim: I would just like to add, in the Bulgarian television space we are terribly lacking debates. We lack shows that are full of energy, we lack short, clear, and specific questions so that politicians, businessmen, even ordinary people can understand how much they are worth. The programs are very long and one-way - question-answer, question-answer... There were some fictional debates before the elections, and there should be such debates every week to really see where Bulgaria is going. And these debates should be very clear and precise, there should be opposition to specific ideas and visions. Then the TV will be watched.

Host: Thank you very much!