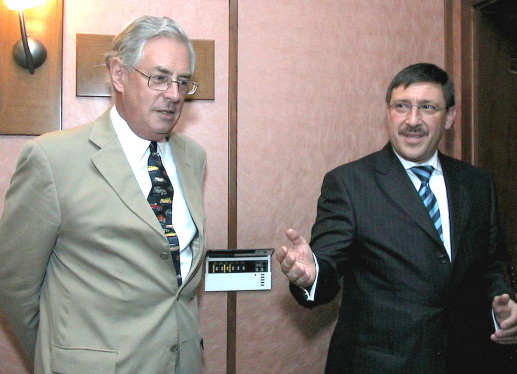 Bill, who didn't always watch from the sidelines...

An infallible consultant, an acquaintance of King Charles III, an advisor to King Simeon and a great friend of Bulgaria, titles highly suitable for Bill Drysdale...

It was almost midnight, we were finishing our dinner in a small restaurant near the ring road, very fashionable at that time, in the end of the 90s in Sofia, when good restaurants were no more than the fingers of my hand. A tired singer was trying to perform a song by Ella Fitzgerald in the little garden and it wasn't working. We were about to leave when a rather massive dog looking more like a stray turned around our table and I heard someone calling him to come back in Polish...

I really love the Polish language, so I looked over at the owner, rather casually dressed, shorts and sweatshirt, not looking like a Pole by any means.

I spoke to him in Polish, naturally he turned out to be British,

Scottish to be precise, then I started to play with the dog in Polish and to my great surprise the shaggy Kasia (popular Polish name, short for Katerina) performed everything unmistakably...

... I have no exact recollection of how or when I met Bill Drysdale, and he certainly doesn't either. He was managing the consulting giant KPMG in Bulgaria and we probably ran into each other at the hundreds of receptions, cocktail parties, or business forums at the time, but it was our meeting in that little restaurant that started our great friendship. Every now and then we'd catch up at a meeting and then sit down for a coffee in the only prestigious place at the time - the lobby bar of the Sheraton Hotel, to have a chat, but also mainly to see who with whom was here, from which we got a good idea of the business relations in Sofia.

It was early on somewhere around Christmas of '98 when he surprisingly called me and said:

Prince Charles and I founded a business leadership forum,

we are going to meet with King Simeon at the Diplomatic Club in Gorna Banya right after the New Year, I really want you to come too, you have interesting things to say...”

I barely waited for the conversation to end and immediately submitted my application for membership in the Forum and thus became its first member after its founding. It was full of my friends and business partners, all of us had a single goal in our offices - to be an example of ethical and transparent business and make Bulgaria a better place to live in. Bill Drysdale was undoubtedly one of the powerful drivers of this process, and it was only logical that I should join this very effort.

and it gave me another reason to begin actively helping Bill in this wonderful work. What's more - we also had the strong support of the Prince of Wales, as the Forum was part of a thoroughly worldwide chain to promote ethical business in dozens of countries. Those were actually some of the most romantic years in my business and my constant conversations with Bill, his superb Scottish sense of humor really gave me hope that Bulgaria was becoming a better country and it is the business that should be at the forefront of this process.

One day he came to my office without even calling in advance, walked in on me without knocking, excited and hurried, sat down, and began immediately.

“I'm going back to the Island, and someone must take over the Forum after me,

for me you are the best choice…”

I stood still and watched him. What he was telling me couldn't possibly be true... There were already fifty big local and international companies in the organization, I was running an office with a dozen people, and basically on the fifth of every month we started collecting money for the next salaries... Steady and honestly, with a lot of hard work and dedication, but still...

“Bill, you're wrong, why don't you approach a foreigner, they have a huge international experience... I'm a nobody in the business, I only started a few years ago...

Bill interrupted me with his hand and continued excitedly.

“Maxim! Leave that to me, you can't look at yourself

from aside, you're the leader, don't you realize it?”

I agreed on one condition - that the vote be secret and that each of the candidates, there were four of us, was obliged to present their concept for the next three-year term. Even more surprising than Bill's proposal was the fact that I was elected by a large majority, and by my colleagues who ran the big companies with several hundred people. They announced the results of the vote in the ballroom of the Sheraton Hotel, Bill came first to shake my hand and whispered to me:

“Maxim (he never called me Max, like at least eight out of ten foreigners), didn't I tell you, it's much better when I watch from the sidelines, that's how I judge best... And not only me!”

... A few years have passed and one late night I received an email from Bill with a one-line message and two short words:

Bill Drysdale reappeared as an advisor to King Simeon while he was prime minister and he was effectively the "warm link" between the Prince of Wales and his cousin who was devotedly trying to make a difference,

but to be remembered for the next 8000 days at least... With a young team, wonderful advisors, one of whom was Bill, this time not "watching from the sidelines" but actively participating so that Bulgaria has a transparent, honest, and respectable business. Together with Moni Passy, Milen Velchev, Niki Vassilev, Dany Valchev and a dozen other like-minded people we put on the table the vision of a Bulgaria we all dreamed of.

It was Bill who participated in that phenomenal letter of Prince Charles addressed to me after some conversations with the Prince's assistants. The text written by him personally from St. James' Palace: "Dear Maxim, I hope you will forgive me for not being able to speak to you personally and for asking Bill Drysdale to pass on to you the details of our project so that we can start from secondary schools to explain the children what ethical business is...

To this day, Bill is still interested in Bulgaria, helping with whatever and whenever he can. I don't know if my Polish friend Kasia is alive, I hope... She was adopted by Bill during his stay in Warsaw and her eyes radiated kindness, just like his... Certainly without people like Bill, there wouldn’t be hundreds, maybe thousands of people, who loved our country as their second homeland.

And we wouldn't be where we are now.

Despite our discontent, despite the slow pace, Bulgaria is a very different country now. And Bill Drysdale, who easily recognized the leaders from aside, had a strong part in that change.