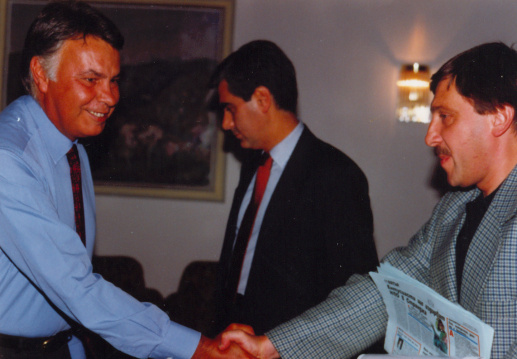 The Spanish prime minister passed through our country like a "lightning bolt" to give courage on the long and not so easy road to the European Union...

Felipe is a legend from several points of view.

Apart from his name sounding rather solemnly and his hairstyle, styling, and everything else suggesting something revolutionary and the start of important changes, all his actions taking over post-Francoist Spain and steering it deftly towards EU membership have been driven precisely by a desire for huge change.

I will leave aside the Spanish history,

what it was like under Franco, how democracy worked its way, slowly and painfully, through institutions and people...

I observed Spain for three very prosaic reasons. First - my cousin, the legend in Bulgarian international journalism, Joseph Davidov, the man who made me passionate about this wonderful profession - to write, to enjoy every word or punctuation mark and to do my best to combine them into a clear and useful message - lived and worked there, and still does successfully.  Second - of course in Madrid was King Simeon, at that time still dreaming of setting foot on Bulgarian native soil, he did so only a few months later. And third - Spain in many ways for me

for how Bulgaria could develop, another thing is that this did not come true...

Almost by chance, I found out that Felipe González, the Spanish Prime Minister, would be in Sofia for a few hours and I frantically started dialing whichever phone came into my sight - the ambassador in Sofia, the one in Madrid, Joseph, my friend Ramon-Perez Maura, then the director of the influential daily newspaper ABC, the press offices in the embassies... Everywhere I encountered with a sort of impenetrable wall, there was no way to take time out for any other meetings except those with the government and the president...

I’ve accepted the fact that it wouldn't work this time, I was walking towards the editorial office of the newspaper "Standard" as was the fashion at the time, imposed unintentionally by the publisher Krasi Stoychev - very light jeans, a monochrome T-shirt, and a jacket, when surprisingly an unknown number was displayed on my mobile phone and a voice in rather spoiled English said:

"Prime Minister Gonzalez is waiting for you at the Boyana residence... Now!"

My heart flipped, I have no memory of how I drove the little Peugeot, I remember that the guard held the gate door open, I parked the car in the middle of the road and when I flew inside already out of breath, the press secretary of the Spanish government just hissed, "Where have you been, you only have three minutes for this conversation."

Felipe walked in energetically, with a big smile, motioned for the others to leave us alone with the interpreter, sat comfortably in the battered leather armchair, leaned towards me, and said almost confidentially, "Hola Bulgaria!

The year is still 1995, I ask him immediately if he knows when Bulgaria will return to Europe, emphasizing the word "return" very strongly, and he doesn't even wait for me to finish my question...

“It is more than clear that Bulgaria is in Europe and has always been there. I often say that the European Union not only must, but has a duty to, accept countries that are making historic changes as quickly as possible, because only in this way it will help them quickly and effectively.

I point out to him that many people claim that there are more development paths ahead for Bulgaria, even hinting that there is also a path that goes through the Bosporus, and he cuts me off dismissively: “Forget it. Many roads, I know, but you look at this one, the European one. Remember, the European Union has 15 members (then), and you have to work very actively with every one of them, Germany's voice weighs as much as Luxembourg's.

He talks passionately about how two things need to change in Bulgaria immediately,

if we want to reach an agreement with Brussels quickly.

The first is to modernize all legislation and make it close, very close to the European legislation. And he insists it is far more important to come to a political agreement in our country that the road to Europe is the only one for Bulgaria. "This has been our Spanish recipe for success," Gonzalez adds, "We have a thousand disagreements, but on the main issues we all agree - Europe, peace and free market.

We go back to 1989, when communist regimes collapsed like a game of dominoes, and he adds:

“Certainly, what happened at the end of 1989 surprised the countries of Western Europe, even shocked them, and I think that

many of them still don't realize what actually happened.

This is the most historic event on the continent after the end of the World War II and the surprise is that it happened literally overnight, figuratively speaking. Everybody, even me, felt that if Germany ever reunited it would take at least 50 years, and my friend Mikhail Gorbachev did it in three days... Do you even realize what historical times we are living in?”

The conversation has no prospect of ending, people from the protocol come in and out nervously the room with the old armchairs and a lot of socialist tables and cupboards in "Boyana", Felipe literally smokes cigarette after cigarette, thoroughly cleans the ashes, plays with his matchbox, but also plays with his words, because he understands perfectly well that he speaks to everyone in Bulgaria.

"You have every guarantee that Spain will be by your side

and will help you in the changes. Who else but us know what it is to go through dictatorship to get to freedom. You and I have won it in different ways, but now we have a common goal, and we are walking towards it together - modern democracy. Count on us, tell all Bulgarians, please..."

The years that have passed since then, and they are many, have shown that Felipe, as well as all his successors to the premiership, kept their word. Spain was one of the first to congratulate us with “Hola”, voted for Bulgaria's admission to the European Union and has always stood by us.

Because both countries need each other, Felipe González tells me, almost taken out by his eager protocol to head to the next meeting...