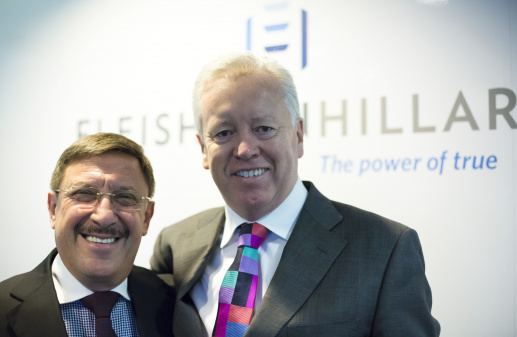 PR is the business of truth...

The Irishman John Saunders, who runs one of the world's largest PR corporations, knows that only honesty in communications can produce results

Stockholm is a lovely city in summer and not so welcoming in late autumn, mainly because there is a slight cold wind from the coast, and the spaces between the buildings are quite open to give it free path... I've chosen a small cozy hotel in the very old center of Stockholm and prefer to spend my evening in its bar with my laptop and a long Bloody Mary with lots of lime, drops of tabasco and coarsely ground black pepper, probably the best I've ever had...

And I have to get ready - this will be my first time attending a meeting as a board member of the ICCO World PR Organization and I wanted to hear as much as I could about it and the people on the board.

Next to me at the bar

a blond-haired large man, obviously a businessman, with a strict suit but a rather unusually loose hair and a curious gaze darting to all sides. He looks at my drink and immediately orders the same without even asking if it's good. However, he glances, probably without even prying at my laptop screen, sees the ICCO logo with peripheral vision and exclaims:

“Ah, we are colleagues, and I am here for this meeting.”

I don't ask who he is at all, but since he immediately says he's from Ireland, I hasten to tell him...

“I recently had dinner with one of your former Prime Ministers, Gareth Fitzgerald, and I told him that I had a dream - to get an autograph from Dolores of the “Cranberries”, a favourite band, a favourite music...”

He looked at me almost disbelievingly that anyone in Bulgaria could have heard of them and shook his head approvingly...

So began our great friendship

with John Saunders, who was then running the European office of Fleishman-Hillard, a global PR chain with an impeccable reputation and very high professionalism, and a few years later became global president.

Various global forums and summits over the years have repeatedly introduced us to John and his Irish accent, stern look, and determination when something needed to be done. Leaving aside that only a month after our meeting in Stockholm, I received an envelope with a special magazine on which Dolores from The Cranberries had written “To Maxim” with a heart for a signature...

Far more important was that

wherever he could reach on the subject of ethical business, honest relationships and professionalism to both clients and teams. And I guarantee it was all too easy for him to be heard - clearly and accurately.

A year or two later, we both had a change of status. I was now elected President of ICCO, the first ever from Eastern Europe, and John became Global President of Fleishman-Hillard and moved to New York.

We bumped into each other by chance in London and when he found out I was going to be there he immediately offered to see me in his office early in the morning and while he was formally welcoming me just as a president is welcomed, he said to me:

from little Bulgaria to becoming president

of a global organization and in the most dynamic business in the world... Public Relations!”

And we started talking about how important it is right now, when the world is overwhelmed by social media, when billions of people around the world can create and share content, that we PR professionals should be the role models for how people use media. "Who if not us who are best at the business of influencing. That's why if one person is honorable and honest, we should be all of that but multiplied by a hundred...”

These are also the topics that John talked about fiercely in endless conversations - professionalism and integrity.

I couldn't disagree with him, but it wasn't enough. I soaked up more than just his words every time I met him,

but also, the enthusiasm and emotion,

and everything that made him think our business was innovative and leading the way for all other businesses in the world.

“Listen Max, we were consultants before, now we are the decision makers. If this isn't a great, historic change for our business, cheers...”

He immediately responded to my invitation to contribute with an opinion piece to my now worldwide bestseller written just before the pandemic, “The Global PR Revolution”. While we were still discussing how and in which part, he would contribute he said to me quite clearly: "Just so you know,

I'm not quite sure these changes are really revolutionary,

I'd rather call them an evolution, but there's no doubt the world has changed, and our business has changed. Now really any manager can't make any decision without our advice, given as quickly as possible..."

Then he looked at me and, expectantly, and added: “Especially when everyone knows that we work for the truth - the truth and the truth alone. It's also the only way anyone can truly succeed in our business... No matter where they are in the world.