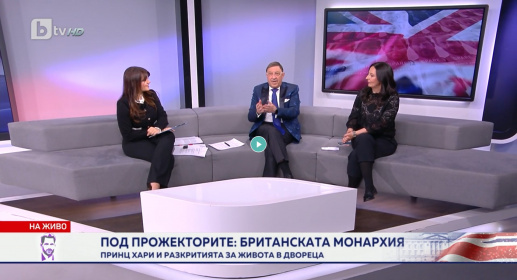 PR expert Maxim Behar took part in bTV's exclusive show, airing the first ever interview with Prince Harry since the publication of his book “Spare”, in which he shares details about the royal family, his mental health and his reasons for giving up his royal privileges. Behar shared his views around the way these revelations are perceived in British society, as well as the future of the monarchy.

Host: Our first guests in the studio are psychotherapist Detelina Stamenova and PR expert Maxim Behar, who has also had several personal meetings with King Charles. Question to both of them. Did it really need to come out this way?

Maxim: Yes, of course. Because it's life in 2022-2023. There's nothing hidden, it's all public. I've read reviews of the book, I've read the interview. Second, what we see looks like a Hollywood production with Bollywood elements. There are no secrets these days. Nowadays the world is very public, and Harry is just sharing what happened to him and what happened to millions of kids who don't have the focus that Harry has. I don't see any drama in the fact that he sat down and confessed to one or two, or that he wrote it in a book.

Host: It's not about drama, it's more about the values of the monarchy. The main motto for years for the monarchy was "Don't complain, don't explain." Is that outdated now?

Host: Mr. Behar, with your professional experience, how much of what Prince Harry shares is more the product of an American approach of personal PR and how much of his image can we accept as truth?

Maxim: Basically, the American and the British approach overlap a lot. I will share with you something personal that I have never shared publicly. I was his age when my mother passed away in a car accident and my father broke the news to me in exactly the same way, in exactly the same words. I absolutely understand that whole emotion, I've lived it, I've been through it. It's a deeply moving story that I imagine people all over the world will sympathize with and shiver when they read it. At the same time, the main difference is that this is a royalty that is extremely interesting. What we're seeing is a very good sequence of moves of PR experts and I think we'll be looking forward to more series in this "Harry and Meghan" saga.

Host: This common human thread of these emotions is very important, do you think it's normal for children to imagine, to secretly believe that their mother is alive, as Prince Harry did?

Maxim: I've been doing this for years after my mother passed away. I had a big portrait of her. Of course, my father married happily after that, but I had that portrait in my room for a long time. You might not believe this story, but as a student before exams I prayed to my mother's portrait so I could pass them. My second mother will turn 90 in a month, I love her as my own mother, she raised me, but I always remember my birth mother and that lasts a lifetime.

Maxim: Everybody wins. If you look at it from a purely communication’s point of view and do an analysis, the royal court doesn't lose. His father, King Charles, his wife, do not lose. Harry himself wins by being honest. Money aside, he would have won it with a book and without a book. That people sympathize with him and that he makes one public confession, he wins sympathy. He wins by having an honest and transparent public approach that has never been seen in monarchies. When we read this book ultimately the image of the King is not a negative image. On the contrary, it is the image of a father, of a man who suffers, of a man who cares. And because for generations all people have thought of the royal institution as something closed, something taboo, for the first time it opens up and we see every single thing that happens there, and it happens in every family in the world.

Maxim: He cannot be stopped. How can a man be stopped, that for 2-3 years now has been constantly parading on TV channels, making films, giving interviews, writing books. I'm far from any conspiracy theories, however I'm 99% sure this whole thing is coordinated with Buckingham as well. The Buckingham people know about this thing, they were warned, they read the book beforehand. But it's not a conspiracy theory at all, that's how it's done. If you want to make a bridge to your family, not have a life-long argument with them, sure, you're honest, you're honorable, you tell your stories. There are about 600 incidents like that in every family.

Host: In a family that starts its day every morning with the tabloids.

Host: I want to ask, is royal protocol really so strict that the prince had to ask his grandmother for permission to be unshaven at his own wedding?

Maxim: Absolutely yes. It's royal protocol. But I'm sure any commoner would ask their parents how to go to their wedding.

Host: What kind of communication is it where you have to use streaming platforms, international outlets, CNN to reach your loved ones?

Maxim: He doesn't talk to his relatives at all, he talks to the British. And what he tells them in one sentence - "And we're like you, and we fight, don't hate us, and we do drugs, and we have sex after a drink like you."

Host: Even as a provocation, how would you comment on the fact that more than 65% of Britons say they don't actually care about the prince’s story at all? I would also go into a contradiction with you that this story is well received, because according to the majority of the public here it's the opposite. People don't like what the prince is saying and the blows he is dealing to the monarchy.

Maxim: I'm not saying it's perceived well. I am sure there is a strong reaction from the British society, which lives in some stereotypes and standards. However, in a few years' time all that will change because they will really wake up at some point and realize that these are not bad people. It's normal for the reaction to be more negative because this sort of thing has never happened in the royal court.

Host: And your prediction, Mr. Behar, will we see the two brothers side by side at the coronation?

Maxim: In that sense, he is not the black sheep at all, but on the contrary, he is our boy, the cute ginger boy who tells his story. Nothing to do with his uncle or all those stories that happened around Prince Andrew. I think in 2-3 years’ time this whole story that is currently playing out will bring a lot more positives to the monarchy than negatives. I think we will see them at King Charles coronation side by side.