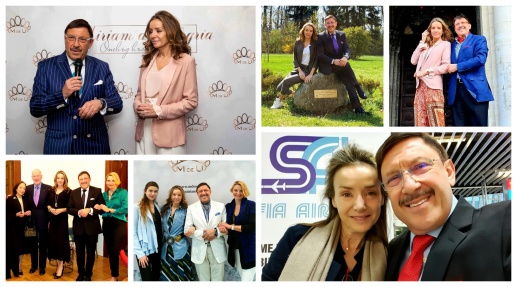 The visit and the exhibiton of Princess Miriam de Ungria

Princess Miriam de Ungria, wife of the late Prince Kardam and daughter-in-law of King Simeon II, presented her new handmade jewelry collection MdeU: Beyond Imagination. Maxim Behar, CEO of M3 Communications, Inc., the PR agency behind this project, and a long-time friend to the royal family, was mediating the event.

The opening was marked by a press conference, followed by a cocktail. Many representatives of the Bulgarian elite came to personally congratulate the royalty and enjoy the beautiful selection. Among the special guests were King Simeon II and his wife, Margarita, as well as the vice-president, Iliana Yotova. The event was covered by the biggest media in the country.

Princess Miriam had a very busy schedule during her visit in Bulgaria. She gave interviews for several national TV channels and even made an appearance to a social event. In spite of that, Maxim managed to organize her free time and take her around the capital. He was the host of a formal dinner, attended by the princess and the royal family.