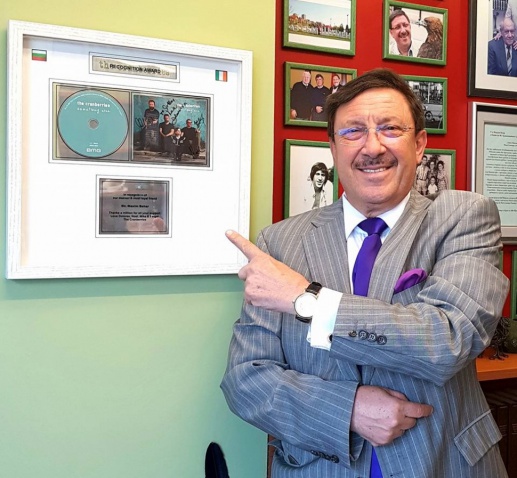 Irish rock band The Cranberries announced in a specially crafted certificate the Bulgarian PR expert Maxim Behar as Sir, a noble title usually given by the queen.

On a special plaque, including the last album of the band, Something Else, decorated with the Bulgarian and Irish flag, is inscribed: "With the gratitude of our most dear and loyal friend, Sir Maxim Behar, with a thank you for your support." Dolores, Noel, Mike and Fergal from The Cranberries. "

Separately, Dolores O'Rioardan has written on the album "Sir Max - With Love".

Maxim Behar, now President of the World PR Organization, ICCO, is a long-time admirer of The Cranberries, world-famous for their hits Zombie, Dreams, Dreaming My Dreams, No Need to Argue, and more. He has toured many cities in Europe following the legendary gang on their concerts. He has their rare recordings, and years ago a founded a fan club of the band in Bulgaria.

"I find this a natural gesture, Maxim is known among the world's leading PR professional guild, he is very fond of the Irish band's music, lyrics and the presence and he deserves that respect."

"Sir is a very honorable title given to him by great musicians, "says Justin Greene, an Irish music producer and PR expert who worked for The Cranberries as well as for Elton John and many other rock and pop stars.

"I have a great dream come true," Behar wrote in his Facebook account. "My deepest respect for Her Majesty the Queen who usually distributes these titles but to get "sir" from Dolores and The Cranberries for me is the greatest recognition, one of the greatest rock bands in the whole history of music and now my next dream is to see them in Sofia at their first concert, and I'm starting to work on this project right away, and I'm sure it will happen in the near future, "the expert said.

Maxim Behar is one of the leaders of the Bulgarian PR market with his established company M3 Communications Group, Inc. He is a world-renowned expert in his profession, invited to speak at forums and universities around the world.